From an op-ed in today’s New York Times, Governor Andrew Cuomo of New York takes on those who have condemned the state’s new abortion law—and the governor mentions prominently his own Catholicism:

In his State of the Union address on Tuesday night, President Trump attacked the law that New York passed last month codifying a woman’s right to an abortion, and he proposed federal legislation to roll back the protections provided by the 1973 Roe v. Wade decision. The president’s diatribe was part of the far-right’s escalation of its assault on a woman’s constitutional rights.

It’s worth recalling that in 1999, long before he ran for president, Mr. Trump described himself as “very pro-choice.” Today he claims to be anti-choice, and he shamelessly courts the religious right to win votes.

Too much of today’s political discourse is extreme. But emotions run especially high when politics and religion intersect — as in the debate about a woman’s right to choose. As a Roman Catholic, I am intimately familiar with the strongly held views of the church. Still, I do not believe that religious values should drive political positions.

I just signed the Reproductive Health Act into law to protect against the Republicans’ efforts to pack the Supreme Court with extreme conservatives to overturn the constitutional protections recognized in Roe v. Wade.

While Cardinal Timothy Dolan, the archbishop of New York, and the Catholic Church are anti-choice, most Americans, including most Catholics, are pro-choice. The 73 percent of New Yorkers who support Roe includes 59 percent of Catholics. While governments may very well enact laws that are consistent with religious teaching, governments do not pass laws to be consistent with what any particular religion dictates.

I was educated in religious schools, and I am a former altar boy. My Roman Catholic values are my personal values. The decisions I choose to make in my life, or in counseling my daughters, are based on my personal moral and religious beliefs.

Thanks to the nation’s founders, no elected official is empowered to make personal religious beliefs the law of the land. My oath of office is to the Constitutions of the United States and of the State of New York — not to the Catholic Church. My religion cannot demand favoritism as I execute my public duties.

There’s a lot wrong with this — beginning with the notion that “Roman Catholic values” can be “personal,” as if they can be trimmed, tailored, altered or redesigned to fit one’s personal aesthetic. But I’m sure a lot of others will soon respond. Cardinal Dolan?

Today, with a home field advantage in the New York Times, Governor Cuomo linked me with the “religious right.”

This is something new from the governor.  He did not consider me part of the “religious right” when seeking my help with the minimum wage increase, prison reform, protection of migrant workers, a welcome of immigrants and refugees, and advocacy for college programs for the state’s inmate population, which we were happy to partner with him on, because they were our causes too.  I guess I was part of the “religious left” in those cases.

The civil rights of the helpless, innocent, baby in the womb, as liberal Democrat Pennsylvania Governor Robert Casey once remarked is not about “right versus left, but right versus wrong.”

The governor also continues his attempt to reduce the advocacy for the human rights of the pre-born infant to a “Catholic issue,” an insult to our allies of so many religions, or none at all.  Governor Casey again: “I didn’t get my pro-life belief from my religion class in a Catholic school, but from my biology and U.S. Constitution classes.”

Yes, religion is personal; it’s hardly private, as the Reverend Dr. Martin Luther King, Jr.’s life and struggle for civil rights so eloquently showed.  Governor Cuomo’s professed faith teaches discrimination against immigrants is immoral, too.  Does that mean he cannot let that moral principle guide his public policy?  Clearly not.

Debate abortion on what it is.  Don’t hide behind labels like “right wing” and “Catholic.” 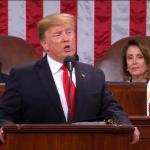 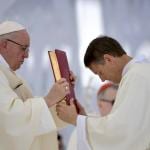 February 6, 2019 Awesome: Deacon from Richmond Served at the Pope's Mass in UAE
Browse Our Archives
get the latest from
Catholic
Sign up for our newsletter
POPULAR AT PATHEOS Catholic
1

God in Times of Uncertainty
“As they were coming down from the mountain, he charged them not...
view all Catholic blogs
Copyright 2008-2020, Patheos. All rights reserved.