One week after Facebook banned Minister Louis Farrakhan and others for promoting “violence and hate,” the Nation of Islam leader insists that he is not a hateful person.

Farrakhan told those at Saint Sabina Catholic Church in Chicago on Thursday that he is “a hated man today.”

“Saturday, God willing, I’ll be 86 years old. I have never been arrested, no drunken driving,” he said. “What have I done that you would hate me like that?”

Pointing to his mouth, Farrakhan said: “It’s this that they fear. I don’t have no army. I just know the truth. And I’m here to separate the good Jews from the Satanic Jews.”

The Nation of Islam billed Farrakhan’s speech as a response to the “public outrage over the unprecedented and unwarranted lifetime ban.” The church’s invitation to Farrakhan drew sharp rebuke from the Illinois Holocaust Museum. The organization criticized the church, saying the speech would provide a “platform for bigotry.”

Saint Sabina live-streamed Farrakhan’s speech on its website and Facebook page, despite the ban on the controversial leader.

Farrakhan said he used the social media platform “with respect.” “I never allow those who follow me to become vile as those who speak evil of us,” he said.

Farrakhan denied being misogynistic and homophobic. He said, “The white people who think I’m a hater,” don’t know him.

Nearing the end of his address, Farrakhan said: “I have not said one word of hate. I do not hate Jewish people.”

“No one that is with me has ever committed a crime against the Jewish people, black people, white people, no matter what your color is.”

The Rev. Michael Pfleger, pastor of Saint Sabina, said he has known and worked with Farrakhan for 30 years and has denounced Facebook for banning the controversial leader.

“This is a free-speech issue,” Pfleger told CNN. “I don’t agree with everything Minister Farrakhan has said. I don’t agree with anyone on everything, but we are in a dangerous time when we can no longer have dialogue without demonizing one another.”

Before the address, Pfleger said: Farrakhan “has been a bold voice against injustice done against black people in this country and his voice deserves and needs to be heard.”

Father Pfleger, of course, is well-known in Chicago and has a history of controversy himself, notably for his outspoken political activism and his support for the ordination of women. The previous cardinal archbishop of Chicago, Francis George, even suspended him from the priesthood for a time in 2011. Of the latest incident, CNN notes:

Phil Andrew, the Archdiocese of Chicago’s director of violence prevention, was expected to be among those at the Illinois Holocaust Museum denouncing Saint Sabina for hosting Farrakhan, according to a museum spokesman.

In a statement, the Archdiocese of Chicago that its leader, Cardinal Blase Cupich, was not consulted before Pfleger announced the event with Farrakhan and that the archdiocese is “not sponsoring” the speech.

UPDATE: Statement by Cardinal Cupich. From the Archdiocese of Chicago website:

The event involving Minister Louis Farrakhan at St. Sabina Parish is not sponsored by the Archdiocese of Chicago. Cardinal Cupich was not consulted before Fr. Pfleger announced the event.

The framers of our Constitution included freedom of speech in the First Amendment because they knew that it was essential to a healthy democracy. Without this sacred right, injustice goes unchecked. This is precisely why it must never be abused.

There is no place in American life for discriminatory rhetoric of any kind. At a time when hate crimes are on the rise, when religious believers are murdered in their places of worship, we cannot countenance any speech that dehumanizes persons on the basis of ethnicity, religious belief, economic status or country of origin. We are all part of the human family, and we owe it to one another, our children — and our creator — to act that way. 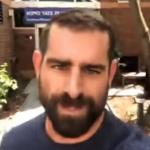 May 9, 2019
Father of Teenage Girl Harassed by Rep. Brian Sims Speaks Out
Next Post 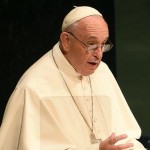 May 11, 2019 More From Francis on Women Deacons: 'We Have to See What Was There at the Beginning of Revelation'
Browse Our Archives
Follow Us!