You’ve got to see this to believe it:

The story, from Knoxville:

Spreading their message in a unique way, three priests connected with students at Knoxville Catholic High School during an all-school assembly on Sept. 24. It was Spirit Week, so students and faculty were pumped up and ready for the energetic morning program, “When Culture and Faith Embrace.”

The priests all hail from California; Fathers Joseph Aytona and Jewel Aytona are brothers, and after Father Ricardo Pineda joined the Catholic Church, he heard about the Aytonas’ unconventional method of ministry.

“Breakdancing was something I was interested in and wanted to learn,” Pineda said, thinking to himself, “I can do that.” The trio became friends through shared interests in serving God and reaching out to young people by incorporating breakdance and beatbox into their ministries.

The Aytona brothers were raised in Los Angeles in the early 1980s. Growing up, they were drawn to breakdancing and soon joined a dance crew. “It was an avenue to good, clean fun,” said Jewel. Earning multiple theology degrees, both were ordained as priests and took their ministries around the country to engage youth.

Father Ricardo felt a calling to the priesthood at an early age. Initially from San Diego, he got serious about his religious calling while attending the University of Notre Dame in South Bend, Indiana. While there, he played trumpet in the marching band. The university caries the nickname of the “Fighting Irish”, so there was a lot of symmetry as Father Ricardo played his trumpet for KCHS’s students, also known as the “Fighting Irish”.

Father Jewel kicked off the program by beatboxing, the technique of using one’s voice to mimic drums and other musical instruments; this form of vocal percussion got the attention of the kids. Performing songs tailored to deliver his message, he followed by speaking about the tenets of Catholic faith. 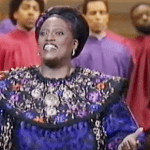 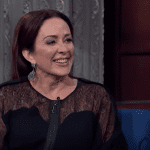 October 1, 2019 Patricia Heaton talks with Colbert about making faith the center of your life
Browse Our Archives
get the latest from
Catholic
Sign up for our newsletter
POPULAR AT PATHEOS Catholic
1