Innovation at #SinodoAmazonico: Cardinal Baldisseri announces that beginning with this afternoon’s session, members of the synod may wear clerical suits rather than their cassocks/soutanes. Applause follows. pic.twitter.com/YEyK3wv7wR

Anthony Ruff has this take on the development:

Suit coats rather than cassocks for clergy reads more egalitarian, slightly less distinct from lay people, less elegant, less sacral, an understanding of ministry less monasticized (I support habits for monks, btw, but don’t think monks are the model for all clergy), less medieval (or Renaissance) European, more in touch with the contemporary world, potentially less countercultural, but potentially more evangelical and hence countercultural about the things that most matter.

To go back to Jonathan Day’s piece, if bishops wear suits but Francis retains the white cassock, today’s change will ironically serve to isolate the pope symbolically from the episcopate. Or do you suppose we’ll ever see a pope in the black suit coat of a parish priest?

Making cassocks optional presents a choice to each synod father, and individual choices could be read as making statements, which could become divisive. It’s probably a good idea not to read too much into dress choices. Or take the issue too seriously. 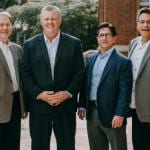 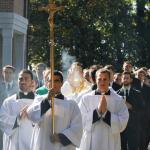 October 7, 2019 'Why is our son in the seminary?'
Browse Our Archives
Follow Us!

Changing Jesus: A Perennial Tradition
Changing deeds and words of Jesus is not something recent in Christian...
view all Catholic blogs
Copyright 2008-2017, Patheos. All rights reserved.