What Channel Surfing Taught Me About Christmas

Last night as I was surfing TV channels, I came across a sitcom about a family preparing for Christmas. The teenage daughter wasn’t sure whether to give a friend a gift, concerned that the friend might not have a present for her in return.

The son was keeping score of how much he spent on his friends and how much they spent on him.

And the mom, shopping for a last-minute gift, had to fight her way to a table of sweaters and blouses at the department store, where she faced down the glare of a less-than-helpful salesperson.

Underlying the whole thing was a manic energy. Too many fruitcakes to give out. Too many decorations to hang.

But in the end, the family found the meaning of Christmas again by bringing toys to kids in the hospital.

It was an episode of The Donna Reed show from Christmas Eve, 1958.

Wow. That means that there hasn’t been a Christmas in my lifetime without collective guilt over the commercialization of the holidays.

That’s a long time to beat ourselves up year after year. And it started long before Donna Reed.

We think the world has changed dramatically, and in some ways it has. But many of the same things we bemoan today about commercialism and the loss of meaning of Christmas have been going on for years. Generations, actually.

Before World War II, President Roosevelt moved up the date of Thanksgiving with one purpose in mind: to extend the holiday shopping season. Congress signed it into law in 1941.

We think the world is much worse than it used to be, and that people are selfish and uncaring. We certainly don’t have to look far to find examples of how separate and isolated individuals feel.

But then again…other examples tell a different story. In our community last week, when the local holiday light show that benefits the Make-a-Wish foundation was flooded out, individuals and companies stepped forward and raised $60,000 in a few days to make sure kids’ wishes would be granted.

Examples of giving, generosity, gratitude, forgiveness—all the things Christmas represents—are everywhere. So does it really help to keep living out the Donna Reed story every year?

I think it’s about more than the commercialism. It’s really the Christmas story itself, reenacted in our own inner journey to the manger.

We can walk through a fog of darkness in the form of guilt, shame, regret and loss. And then Christmas comes along like a bright star and gives us a chance to extend love in a way that we may not do all the rest of the year. It guides us to the generous and giving side of our nature.

This can be the light in the darkness. Or, if we feel guilty over what and how we give, it can simply be more of the darkness. We get to choose.

We all know that Christmas never has been about the thing we give (although I would have argued that when I was eight years old and got a Barbie Dream House), but about the willingness to do so. It’s the act of extending love in whatever form it takes, whether it’s wrapped in paper—with pudgy snowmen or cats wearing elf hats—or not.

So maybe we’re asking the wrong question about Christmas. Instead of “Has Christmas become too commercial?” maybe we should ask, “Can we celebrate Christmas without guilt?”

That, in fact, is my wish for you this holiday. Give big, give small, give of yourself or don’t give things at all. But do it with joy, reminding yourself that we’re all part of a crazy species of human beings. We make huge mistakes, we hurt each other, we hurt ourselves, and then…and then…there’s a light in the darkness. And everything changes in a moment.

Fifty-seven years from now, someone will be surfing information on some yet-to-be-invented hologram and will come across an old-fashioned TV show from 2015 lamenting the lost meaning of Christmas.

It makes a great story. But it doesn’t have to be your story.

Darkness or light. Guilt or joy. It’s your choice.

Find the meaning for you, and have a very Merry Christmas! 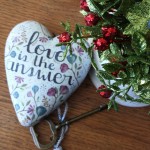 December 18, 2015
If You're Wishing for Love This Holiday Season
Next Post

December 31, 2015 Are You the One Who Found My Credit Card?
Recent Comments
0 | Leave a Comment
"Love, love, LOVE this! Sorry it took me 4 years to stumble across it!"
Donna A “Miracles” Message to Donald Trump
"I wish we could wish for another president, lol, but I guess this blog will ..."
madison_kelly 5 Spiritual Steps to Ease Tensions ..."
"When I was a kid, about the age of 6 I was very shy and ..."
Nicholas Premonitions – No Ordinary Dream
"Thank you, Claire!"
Debra Engle A “Miracles” Message to Donald Trump
Browse Our Archives
get the latest from
New Visions
Sign up for our newsletter
POPULAR AT PATHEOS New Visions
1