Candace Cameron Bure starred in thirty Hallmark Channel movies, ten of which were Christmas films. Many of her fans were surprised when she announced last April that she was leaving Hallmark Media to develop, produce, and star in projects for the new traditional-family-oriented network Great American Family.

Now she has explained her career move in an interview with the Wall Street Journal: “My heart wants to tell stories that have more meaning and purpose and depth behind them. I knew that the people behind Great American Family were Christians that love the Lord and wanted to promote faith programming and good family entertainment.”

By contrast, Hallmark will release The Holiday Sitter next month, the network’s first original film to focus on a same-sex couple. Bure has no plans to follow suit: “I think that Great American Family will keep traditional marriage at the core.”

Predictably, Bure is being criticized by some in the industry. Actress Hilarie Burton Morgan slammed her as “disgusting” and a “bigot,” adding, “I don’t remember Jesus liking hypocrites like Candy. But sure. Make your money, honey. You ride that prejudice wave all the way to the bank.” Dancer and actress JoJo Siwa called Bure’s stance “rude and hurtful to a whole community of people.”

Of course, those who support traditional marriage are a “whole community of people” as well.

In related news, the Senate voted yesterday to advance legislation that would cement same-sex marriage protections into law. The so-called Respect for Marriage Act is a major issue for religious freedom in America, a topic I plan to discuss in detail tomorrow.

Meanwhile, we are learning that at least four hundred LGBTQ candidates won their midterm races last week. And a Methodist church in St. Petersburg, Florida, recently invited a drag queen to deliver the children’s sermon during a Sunday service.

These are just a few examples of the ongoing quest to normalize LGBTQ behavior in our society. This strategy is succeeding. According to Gallup, the percentage of US adults who self-identify as lesbian, gay, bisexual, transgender, or something other than heterosexual has now risen to 7.1 percent. This is double the percentage from 2012, when Gallup first measured it.

“My body, my choice”

It is clear that LGBTQ advocacy is here to stay.

The reason is simple: fallen people want to be the king of our personal kingdoms. We want to be our own gods (Genesis 3:5) with authority over our own lives. “My body, my choice” is the mantra of our post-Christian culture. It applies to everything from abortion to euthanasia, from gender issues to legalizing drugs.

Medical science has helped us gain such apparent sovereignty over our bodies. For example, medication abortions can be obtained and performed at home. Physician-assisted death is more available than ever before. Physicians can modify our bodies and “transition” our genders through hormones and surgeries in ways heretofore unthinkable.

As a result, evangelical Christians should be prepared to face unrelenting and escalating attacks on biblical morality. Our children will be ridiculed at school; we will be pressured to adopt Pride Month and other LGBTQ advocacy at work; our churches, schools, and ministries will be marginalized and worse.

“I have great love and affection for all people”

You and I must resist two temptations in response.

One is to privatize our faith, to back down in the face of opposition and withdraw from the “culture wars.” This we must not do: we are commanded to “honor Christ the Lord as holy, always being prepared to make a defense to anyone who asks you for a reason for the hope that is in you” (1 Peter 3:15). Every person you know deserves to know what you know about the Lord and his perfect will for our lives.

A second temptation is to condemn those who condemn us. This we must not do: we are commanded “to speak evil of no one, to avoid quarreling, to be gentle, and to show perfect courtesy toward all people” (Titus 3:2). We are not to be “culture warriors” but “cultural missionaries,” committed to “speaking the truth in love” (Ephesians 4:15) no matter how others treat us.

Candace Cameron Bure modeled such a response when she replied yesterday to her critics: “All of you who know me, know beyond question that I have great love and affection for all people. It absolutely breaks my heart that anyone would ever think I intentionally would want to offend and hurt anyone.”

She added, “To those who hate what I value and who are attacking me online: I love you.”

“The best way to destroy an enemy”

The simple fact is that you and I are just as fallen and temptable as those who oppose biblical morality. Our sins are no less sinful than theirs. The difference is that “by grace [we] have been saved through faith” (Ephesians 2:8). We have received a transforming gift we are now called to pay forward to those who need the grace we have experienced.

So, when you hear about Christians being ridiculed for biblical morality, pray for your fellow believers and for those who disparage them. When you face such ridicule, pray for the grace to “bless those who curse you” and to “pray for those who abuse you” (Luke 6:28).

Theologian F. F. Bruce observed, “The best way to destroy an enemy is to turn him into a friend.”

What new friends will you make today? 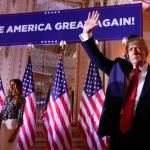 November 18, 2022 Does the so-called “Respect For Marriage Act” threaten our religious liberty?
Browse Our Archives
Related posts from Denison Forum

Checking Out the Library of Congress-- Part Four
Photography from the Civil War on became an occupation for all sorts...
view all Evangelical blogs