The book of Revelation: A Love Story!

I am working on a new commentary on the book of Revelation and I thought it might be relevant to post the following.

Unfortunately, there are a lot of popular books written on the book of Revelation, which, I am sorry to say, have had a great influence on contemporary Christian thought. These books often convey a different message. Many of them suggest that the book of Revelation is merely a blueprint for God’s coming judgment on the world.

I would like us to ponder for a moment what this conveys to a non-Christian? Does it not present God as angry, malevolent, and wrathful? Those who do not know Jesus are often warned that they better get their act together quickly and become like us.

I have seen Christians, who have been influenced by these books, conclude that they can just sit back and be at ease because they know Jesus? When things get going bad, then God will rescue us.

In saying this, I realize that some might reply by saying that God is both loving and wrathful and that we are called to testify to both.

This, of course, is true. But it fails to take to heart what I am saying.

Too often, I see Christians who live as though one is true and the other is not. They may say that God is both loving and wrathful and that we should testify to both. Too often, however, they do not live accordingly. The God that is presented to the world is an angry, wrathful, and judging God, and rarely the loving God who made Himself known throughout the NT. You know, the loving God who is delaying His return so that all may be saved (2 Pet 3:9).

When we present God as angry and wrathful and waiting to inflict suffering on the world, we are contradicting how God has made Himself known in Jesus.

My concerns have been validated (unfortunately) over the past 6 months of quarantine. As the pandemic has spread, I have seen numerous blogs and social media posts by Christians that have said (in not very loving terms) that Covid-19 is the third seal of the book of Revelation and that God is judging the world for their sins (see my posts on the end times and the return of Jesus (Apr 09); and Covid-19 the 3rd seal (April 27).

Some of these same people have also suggested that Covid-19 is not a big deal, that we do not need to wear masks, and that the number of deaths has been exaggerated.[2]

This says to the world that God is bringing His wrath and you better wake up and repent. (Ironically, the book of Revelation does command people to “wake up” (cf Rev 3:3). It is just that God was addressing the Church at Sardis.)

The answer is, yes, I believe in the Lake of Fire. I believe in it so much that I do not want to see anyone go there.

And I believe that the message of the book of Revelation, and the whole Bible for that matter, is telling us that the means by which people will be spared from the Lake of Fire is through the faithful, loving, and sacrificial witness of God’s people.

This is the love story. It is about us loving our neighbor so much that we are willing to die for them.

This means that when we project God as a being of wrath and not love, and when we fail to display acts of love (as simple as wearing a mask) and, instead, project hatred towards the other, we are fundamentally at odds with the Gospel.

When Jesus interacted with people, He loved them; He cared for them; He wept with them.

“Ah, but Jesus also condemned people”—you might say. That is true. But look carefully at who Jesus directed His condemnations toward. It was predominately the religious leaders. In other words, the people to whom Jesus spoke the most harshly were those who claimed to be followers of the Lord; especially the leaders. 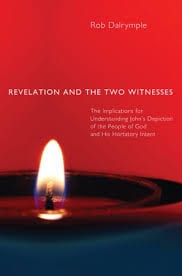 For those who would like to get a head start on their study of the book of Revelation, instead of waiting a year for my commentary to be published, I have written several related books: Follow the Lamb: A Guide to reading, understanding and applying the book of Revelation; as well as Understanding the New Testament and the End Times. Those who are more academically minded might also like: Revelation and the Two Witnesses.

September 14, 2020
America and violent protests: how do we bring an end to them?
Next Post

October 31, 2020 All Saints Day and Election 2020: Jesus, politics, the election, and the kingdom of God
Browse Our Archives
Related posts from Determinetruth

Religion Overthrows Heresy: The Art of Anti-Protestantism
I am thinking of founding a Museum of Religiously Incorrect Art. We...
view all Evangelical blogs
Copyright 2008-2021, Patheos. All rights reserved.
Close Ad