Get updates from DeVon Franklin delivered straight to your inbox

Franklin serves as the President/CEO of Franklin Entertainment, a new first-look production company with Sony Pictures Entertainment. His first film under the Franklin Entertainment banner, Miracles From Heaven, stars Jennifer Garner and Queen Latifah. The film is slated for release on March 18th, 2016. He is currently in pre-production on the animated feature film, The Star, which hits theaters December 2017 and will be distributred by Sony Pictures Animation. In addition, Franklin is in development on a number of high-profile projects, including the reboot of the He-Man and the Masters of the Universe franchise.

As the former Senior Vice President of Columbia TriStar Pictures, Franklin was one of the highest ranking createive executives in the industry. During his 10 year tenure at the studio, he championed box-office hits like The Pursuit of Happyness, The Karate Kid, Jumping the Broom, and Heaven is For Real, resulting in almost $700 million in total worldwide box office sales.

Additionally, while at Columbia Pictures, Franklin simultaneously wrote the best-selling book Produced by Faith, a how-to guide about finding success without compromising your faith. His highly anticipated second book is co-written with his wife Meagan Good, entitled, The Wait: A Powerful Practice to Finding the Love of Your Life and the Life You Love, has already made the New York Times Best-Seller List.

Furthermore, Franklin is considered to be an in-demand speaker and television personality due to his unique perspective on success, love, and faith. He recently wrapped up production on a pilot for his own television show for the FYI and A&E Networks.

Franklin began his career as an intern for Will Smith and James Lassiter at Overbrook Entertainment. He earned a bachelor’s degree in Business Administration with a minor in Cinema-Television from the University of Southern California.

He lives in Los Angeles and is married to the love of his life, Meagan.

Family
VIDEO: What We Told Oprah About Sex
DeVon Franklin 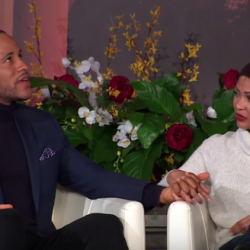 Family
VIDEO: The Lesson I Learned From Marriage That...
DeVon Franklin

Family
How Men's Selfish Pursuit Of Gratification - At...
DeVon Franklin