The God of New Beginnings – Salutations to Ganesh!

(Salutations to the deity who is the giver of joy, the remover of sorrow and the one who eliminates hurdles. The one who spreads love and grace everywhere.)

The harbinger of good luck, a protector and confidante, a patron of the arts and sciences, the champion of virtue and a fount of wisdom – few deities are as beloved in the Hindu pantheon as Ganesh! Also known as Vighnaharta (the one who removes obstacles) he is quite naturally the deity traditionally worshiped by Hindus as they start any new venture. Quite fittingly then, this new column in Patheos starts with an invocation to Bhagwan Ganesh. And it does so in a time that is divinely blessed, as Hindus celebrate the festival of Ganesh Chaturthi, welcoming the beloved deity into their homes and worshiping him with all the exuberance that characterizes the Hindu faith.

Celebrated annually in the month of Bhadrapada per the lunar based Hindu calendar, Ganesh Chaturthi falls in the August/September time frame in the Gregorian calendar and stretches over 10 days. The festival celebrates the many legends surrounding Ganesh, including his birth and his arrival to earth from Mount Kailasha -the heavenly abode of Bhagwan Shiva. 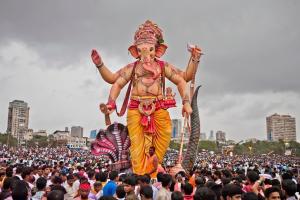 The festival is marked with the installation of moortis of Ganesh in private homes, or temporary public spaces/outdoor tents called pandals. Big or small, private or public, the advent of Ganesh is a highly anticipated process, one that requires careful planning and methodical preparations that set the festive tone for families. For the next few days the beaming blissful visage of Bhagwan Ganesh beams down on devotees, who honor his presence among them, like they would a visit from an honored and revered guest. Devotees mark the days by chanting Vedic hymns, singing prayers and reciting from Hindu texts. Many fast or restrict their diet to simpler, more wholesome and ritually approved foods. Like many of his devotees, Ganesh is believed to enjoy sweets, everything from ladoos, coconuts and jaggery to the modaks(sweet dumplings) that have almost come to exemplify Ganesh Chaturti among several Hindu communities. 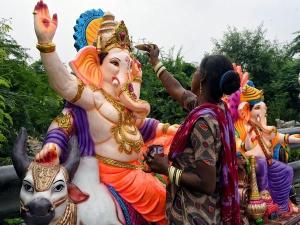 On the 10th day the festival ends with the immersion of the moorti in water as devotees bid farewell to Ganesh and askhim to return again the following year. The farewell ceremonies range from something as simple and private as immersion in a bucket of water to dissolve a small homemade clay moorti, to the massive moortis that  top 35 feet or more and tower over the populace.

In cities like Mumbai, the “visarjan” (immersion) processions can stretch for miles and last for hours, attended as they are by millions of men, women and children, chanting, dancing, singing to the spellbinding beats of the dhol, making their way to nearby bodies of water (a river/lake or ocean). There the moortis are immersed in water amidst huge emotion from the devotees, a ritual symbolizing Ganesha’s homeward journey to Mount Kailash—the abode of his parents, Devi Parvati and Bhagwan Shiva. 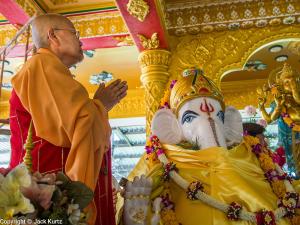 The most exuberant celebrations of Ganesh Chaturthi can be found in India’s western state of Maharashtra along with Goa, Andhra Pradesh, Karnataka, Gujarat, Madhya Pradesh and several others, where the celebrations take on different flavors. Large public celebrations can now be found in countries as far apart as UK, Malaysia, Canada, Mauritius, Nepal, Singapore and more. In the US, large Ganapati celebrations are organized in places like the Bay Area California, Philadelphia, NY, Illinois, Florida and more.

Be sure to check out your local Hindu Temple to see what is planned.

About
Pushpita Prasad is an Indic storyteller and communications professional with a background in studying and working at the intersection of media, technology, content and history. She researches, writes and educates about topics related to Hinduism, its festivals and traditions as well as India, decolonization, media representation and Human Rights. You can read more about the author here.
Previous Post

August 31, 2022
The God of New Beginnings - Salutations to Ganesh!
Next Post

Mindfulness Meditation Can Help You With Your G.R.E
One of my cousins was preparing for his GRE, and was looking...
view all Hindu blogs
Copyright 2008-2021, Patheos. All rights reserved.
Close Ad