A Sweet Way to Learn About Karma

Which religion is the most misunderstood of all? That’s easy.

Whatever faith you subscribe to, chances are you have to deflect a series of false notions, half-truths and plain old meanspirited lies from time to time. Catholics have to constantly reaffirm that they don’t worship Mary (they venerate her). Muslims don’t all look forward to a worldwide jihad.

And Hindus? Well, where do we start?

Let’s just focus on one issue for today. That would be the concept of Karma. To many in the west the notion of Karma is virtually the same as Fate. That is, they believe that Karma signifies we are all puppets of Lady Destiny. According to this school of thought you had no choice but to be right where you are, reading these ramblings of a very poor man’s rishi. No matter how much you wanted to avoid this painful situation, here you are. And there you go. So, if you decide right now that this article is boring the masala right out of you and you stop reading, that was preordained as well.

I give lectures at schools, churches & other mostly non-Hindu groups on a regular basis. This warped idea of Karma has reared its head quite a bit. It took me a long time to come up with a way to relate the correct understanding of Karma vs. Fatalism, but one day in meditation Bhagavan blessed me with something that has become a staple in my lectures. Now I don’t wait for questions, I head them off.

What They Get Wrong

I indicate that many westerners have this erroneous view of Karma and I would like to explain how it works. I tell them that I’m going to ask a deeply personal question and would like to see a show of hands in answering. Then I inquire: How many of you have ever played Candyland? Naturally, 95% or more of the hands go up. I then ask what would happen if we had 100 tables set up with 4 people around each and I asked all the players in the north chairs to draw the 1st card and start the game. Unbeknownst to all players, I have stacked the deck so that the person who starts the game will draw the best cards to high tail it through the Peppermint Stick Forest and Lollipop Woods without getting stuck in the Molasses Swamp and end up at the delicious Candy House before anyone else.

“Now,” I ask, “What will happen in all 100 cases?” The answer is usually a unanimous agreement that each person in the north chair will win. They are right, of course. Assuming nobody cheats or is color blind, there is no chance that anyone in the other 3 chairs will win.        www.ultraboardgames.com/candy-land/game-rules.php

And the Winner Is….

Then I tell my class that we are ridding all the tables of Candyland, and in its place we will put a deck of cards. I instruct the person in the north chair to deal a hand of poker without shuffling. Again, I have stacked the deck in favor of the north chair sitter. He or she will have the best hand. To keep it interesting it will not be a Royal Flush, which beats all hands all the time. But it will be better than the other 3 hands. So, the question goes out, “Who wins now?” While some will immediately agree that the same lucky northerner will win, there is usually someone a bit more astute who brings up the fact that we can’t be 100% sure on this. Do the dealers know they hold the best hand? What if someone with a lesser hand bluffs? What if the dealers are too timid to bet? With poker there are a lot of what ifs. Professional poker players will tell you that the cards dealt count for only 20% of the outcome. Other factors include psychology, memory, patience, and the ability to react serenely to both good and bad hands.

This is the point I try to make: Poker is like Karma and Candyland is Fatalism. We are all dealt various hands in life but we are able to play them in a variety of ways. We may “win” or “lose” but it is not written in the stars that the outcome must go in a certain direction. Even astrologers will tell you that the heavens give only indications of what may happen if certain forces are not overcome. That is why some choose not to know in advance the hint of any prognostication lest it wobble one’s confidence.

When Religions Teach Other Religions

I am very happy to report that after this little whimsical exercise that most groups I address end up getting it. As a matter of fact, one time I hosted a class from a rather conservative Christian college. After I finished that part of my lecture the professor had this rather dumbstruck look on her face. She said, “I’ve never had Karma explained to me that way before.” I found out later that she often used the subject to denigrate Hinduism in favor of her faith by showing how Hindus are mere slaves moving in time to an impersonal force’s fancy.

Not to worry. I’m sure she’s found other ways to accomplish her task.

It is important to realize that in the end there really isn’t “good Karma” or “bad Karma.” While we see it that way in the moment, each reaction to a previous action is an opportunity to grow in deeper Self Realization.

About Fred Stella
Fred Stella was introduced to Hinduism as a teenager. After years of study, he formally embraced the Dharma in his early 30s. Over the years, Fred has spent time expanding his knowledge with study & practice in various ashrams & temples in the US and India. You can read more about the author here.
Previous Post 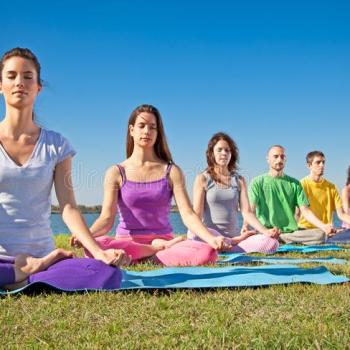