Most readers are probably already aware that Last Testament: In His Own Words, the second and last instalment of interviews between the German journalist Peter Seewald and Pope Emeritus Benedict XVI, was released a few weeks ago.

The book is striking on a number of levels. Most significant is the fact that, while billed as the scandalous revelation behind his famous act of resignation from the Chair of Peter, that episode is actually a biographical blip compared to a host of other, relatively mundane insights into the development of what would later become Fr. Joseph Ratzinger. The first 100 pages alone make the book worth purchasing, generously sprinkled as it is with these tiny flakes of biographical intimacy, which can surprise as much as they move. Some of these include:

He has been blind in his left eye for many years, he remember less and less now, and meanwhile his hearing has diminished. His body had grown very thin…

With Benetict XVI, an era comes to an end, perhaps even an aeon – one of those chapters of history which in the passing of millennia denote the major turning points of history. The eight years of his papacy were something like the great retreat the Church needed, to buttress the interior castle and to strengthen her soul.

3) The Papacy as a Martyrdom

Seewald: …the cross is the authentic place of the representative of Christ. There is a matyrological structure of the papal primacy.

Benedict XVI: …It is certainly enduringly true, and thus the Pope must each day bear witness, must take up his cross each day and always be a martyr, in the sense of being a martyr to the sufferings of the world and its problems…If a pope were only ever applauded, he would have to ask himself whether or not he was doing things right. The message of Christ is a scandal for the world, beginning with Christ himself, there will always be opposition, and the Pope must be a sign of contradiction.

Seewald: …in what ways are you being corrected through Pope Francis?

Benedict XVI: …Yes, I would say, in his direct contact with people…When I read Evangelii Gaudium, or even the interviews, I see that he is a thoughtful person, who grapples intellectually with the questions of our time. But at the same time he is simply someone who is very close to people, who stands with them, who is always among them.

5) On His Incarceration in an American POW Camp

Seewald: …You were in a camp for fifty thousand prisoners at Ulm. How was that for you?

Benedict XVI: It was very difficult. At first we didn’t get anything to eat for two days. On the third day we only got an American ration; it was the first time in my life I had ever seen chewing gum. Then, when we arrived at our designated place, we were always outdoors.

Seewald: What was the defining feature of the Munich School

Benedict XVI: It was defined by the fact that it was completely biblically orentated, working from Holy Scripture, the Fathers and the liturgy, and it was very ecumenical. The Thomistic-philosphical dimension was missing; maybe that was its real benefit.

7) On His Writing Habits

Seewald: Do you also write with a pencil as Pope? Like with your Jesus book, for example?

Seewald: Never with a pen?

Seewald: In this little handwriting, which –

Benedict XVI: has grown smaller over the course of time… 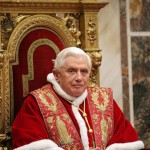