REDEEMING FLESH: THE WAY OF THE CROSS WITH ZOMBIE JESUS (CASCADE, 2016)

Why are zombies consuming the popular imagination? This book – part social analysis, part theological critique and part devotional – considers how the zombie can be a way to critically situate our culture, awash with consumer products. The book considers how zombies are the endpoint of social theory’s exploration of consumer culture and its postsecular turn towards an earthly immortality, enacted on the flesh of consumers. 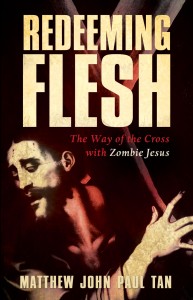 The book also shows how zombies aid our appreciation of Christ’s saving work. Through the lens of theology and the prayer of the Stations of the Cross, the book incorporates social theory’s insights on the zombie concerning postmodern culture’s yearning for things beyond the flesh and also reveals some of social theory’s blindspots. Turning to the Eucharistic flesh of Christ, the book calls out on the zombie’s secularized narrative of salvation of the flesh, one where flesh saved by being consumed and made to die. By contrast, Jesus saves by enacting an alternative logic of flesh, one that redeems the zombie’s obsession with flesh by Eucharistically giving it away. In doing so, Jesus saves by assuming the condition of the zombie, redirecting our logic of consumption and fulfilling our yearning for immortality.

Click here for the launch by Prof. Tracey Rowland

“Exploring the popular meme concerning all things Zombie, Matthew Tan follows their shambling steps from the Enlightenment anxiety concerning death, to the attempt to gloss over death in this our hyper-consumerist and increasingly virtual world. He finds that haunting our world is a loss of the sense of the sacramental. If you want to know what it is the new Christian cultural critique is saying, this is the book for you.”

“In what is both an engaging and academic work of cultural critique, Matthew Tan traces out the way in which the modern anxiety over death plays itself out in popular memes such as the Zombie. Tan is part of new wave of Christian cultural critique–informed, critical, and orthodox–and his conclusion is that in a world that has lost the sense of the sacramental we end up in a consumer culture that feeds on itself and not on Christ. Redeeming Flesh is both an entertaining and informative work that represents the new wave in Christian cultural critique. If you want to know what contemporary Christian commentators are saying in their engagement with hyper-consumer culture then this is an excellent place to begin. Tan is orthodox but not given to nostalgia, for he understands that if we are to bring the world back to its senses then we ought to look deeper into its popular culture.”
–Robert Tilley, lecturer in Biblical Studies, The Catholic Institute of Sydney; author of Benedict XVI and the Search for Truth

“Whereas people used to scare themselves with ghost stories about disembodied spirits, now Western culture fascinates itself with tales of soulless bodies. Tan’s book masterfully blends analysis of how zombie fandom discloses uncomfortable truths about the roles of both body and soul in consumer culture with a daring theological agenda, in which the potential for Christian witness to reclaim its scandalously embodied nature shines forth. This book is theology of culture written at the very highest level.”
—Robert Saler, Christian Theological Seminary

“Matthew Tan makes zombies come alive in Redeeming Flesh. He shows that, when given their cultural and literary due, zombies show us how to live, that is, to live after death. After reading this text, which blends together textual analysis, psychoanalytic wit, and theological insight, one cannot look to either christological devotion, liturgy, or zombie phenomena without seeing them in each other. Living as the undead never sounded like such good news.”
—Silas Morgan, Loyola University Chicago 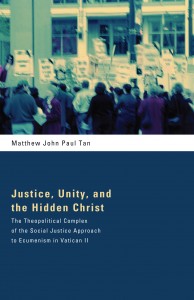 Does social justice promote Christian unity? With reference to paragraph 12 of Unitatis Redintegratio—Vatican II’s declaration on ecumenism—this book argues that an emphasis on justice and unity without proper consideration of social context actually risks obscuring a clear public declaration of Christ, by having Christians uncritically accept the presumptions that underpin the sociopolitical status quo.

This constitutes a failure in Christian interpretation, the crux of which is a failure in ecclesiology. Tan suggests a corrective with reference to works by Pope Benedict XVI, theologians such as Graham Ward, and postmodern theorists like Michel Foucault.

Ultimately, the book invites the reader to begin considering how answering this seemingly simple question will implicate not only theology, but also philosophy and political theory, as well as considering the need for the church to engage in a bolder confessional politics in place of the politics of the public square often favored by Christian and non-Christian commentators.

The book has been endorsed by Prof. Tracey Rowland of the John Paul II Institute for Marriage and Family, as well as Dr. Benjamin Myers of Charles Sturt University.

Click here for a review of the book, here for a free sample chapter, and here to purchase a full copy.