Trinitarian Spirituality, 15: God from the Inside Out

Last week we left ourselves with a strange God and a God who is a stranger. Bette Midler’s lyrics could have come straight from a 4th-century Arian!

If Arius, Eusebius, Eunomius, and their comrades had had their way, the Son would be nothing more than a very unique product of God’s will. Begotten out of God’s desire to communicate his incommunicable majesty, the Son serves as part of a “chain of willing, extending from the Unbegotten through the Only-begotten…” We touch Jesus, who touches God; but for us, God remains behind the curtain.

While many believers in those centuries embraced this model of Trinitarian thought, there were also many who simply tasted something pallid in all this. The Arian system is tidy and manageable; rational and accessible; yet somehow … less. The whole thrust of scripture seems to invite real relationship with God, even friendship. Walking in the cool of the evening, offering friendship, hovering and sheltering, rescuing and guiding—it’s all God in the scriptural narrative, speaking and calling and weeping and longing. And Jesus, who says, “If you have seen me, you have seen the Father…”? Er, did he mean, if you have seen me, you’ve seen the Father’s property manager cum authorized agent?

We begin the counter-arguments with Alexander of Alexandria, Arius’ bishop. Whereas the theologians of unity-of-will drew the great dividing between Unbegotten and everything else, Alexander and his colleagues, our theologians of unity-of-being, drew the line between Creator and everything else. (We remember that the issue of creation was one of the key triggers of the whole discussion.) As Alexander points out, there is no real middle ground between Creator and created; “the notion of a created Creator is simply nonsensical.” If, in fact, the Son is the Creator, as scripture so clearly teaches (Jn. 1.3; Col. 1.16), then he cannot, “nohow, noway” essentially be a creation. A Creator has being in himself, and imparts being to the objects of his will.

Somehow we must understand that the Son is God from the inside out, not from the outside in. Though he is not Unbegotten but Begotten, he shares the heartbeat, not merely the imprimatur, of the divine. Anatolios describes it this way: “Alexander clearly and persistently attempts to present the mystery of the Unbegotten as mutually coordinate with the mystery of the Only-begotten, such that they are really two aspects of the same mystery.”

“Two aspects of the same mystery.” Love that. This gives us a powerful insight into the relational character of God. The relationship, as difficult as it is to understand, between Father and Son—Unbegotten and only-Begotten—is at the heart of the mystery of God.

This changes the whole nature of our salvation. From a savior who comes to us with critical data about God, we have instead a Savior who comes to us offering us what he himself enjoys. As the Only-begotten is in an eternal embrace with the Father, so he makes possible our own inclusion in the embrace—“sonship by grace.”

Thus the pro nobis, the point at which the Son embodies God’s saving will “for us,” comes not at his begottenness, but at his incarnation. As Anatolios points out, if the pro nobis is found at the Son’s begetting, then he was created for us, not we for him.

The Son was not begotten for us, but he was made flesh for us.

Can you see how radically different this is from the God and Savior we were left with last time?

Now we have a God who has bared his heart to us, exposed his deepest self as intimate love between Father and Son. God is forever Father forever loving the Beloved. This God has poured out that inner love on his creation by invading that creation in and through the Son—the transcendent Only-begotten, incarnate in Jesus Christ, bearing witness to his own relationship with the Father and inviting us into it. This message breaks the tidy, accessible Arian explanation into a million shards of separation.

I like the way Brennan Manning describes this in his book, The Furious Longing of God: “The confession of John the apostle that God is love is the fundamental meaning of the holy and adorable Trinity. Put bluntly, God is sheer Being-in-Love and there was never a time when God was not love. The foundation of the furious longing of God is the Father who is the originating Lover, the Son who is the full self-expression of that Love, and the Spirit who is the original and inexhaustible activity of that Love, drawing the created universe into itself.”

This Love-poured-out is the meaning and purpose of creation, redemption, and sanctification. It is the origin and destiny of our existence. It expresses the very identity of God: God is doing what he is. In the eternal begottenness of the Son, God is both the One who loves and the Beloved who loves in return; in the deep purposes of God in the teleological arc of salvation history, God creates, loves, redeems, and invites us to love in return. God’s grace offers us “his very great and precious promises, so that through them [we] may participate in the divine nature…” (2 Pet. 1.4).

Now let’s return to the gospel, the “things that have been fulfilled among us,” as Luke wrote. Now we can look at the self-emptying of the incarnation and the work of Christ among us and for us and pursue some deeper questions about what God is doing. With an “outside” Jesus, we have to think of salvation as some kind of an admittance ticket into the divine arena; but with an “inside” Jesus? An embodiment of God himself? No distance at all between God and humanity in the person of Jesus Christ? What is going on??

Athanasius is just the man to explore this, and as he does so, we encounter the third Person of the Trinity: the Spirit. For Athanasius, “the goal of human existence, achieved in Christ, is…” Wait for it…

June 26, 2012
Trinitarian Spirituality, 14: Putting Jesus on the “Outside” of God
Next Post 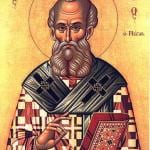