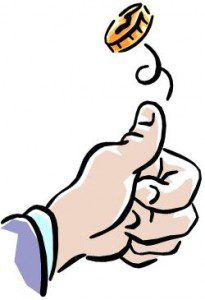 One of the concepts Pascal is best known for is his Wager, a longer fragment in Pensées (f. 418). Here Pascal brings his formidable mathematical mind, operating halfway between the gambling table and the altar, to the issue of faith, and plays with probability theory in the soul. It is such a rich and complex argument that I can’t even begin to deal with all its components. (Nor do I understand them all!)

On the surface, it’s simple enough:

“Let us then examine this point, and let us say: ‘Either God is or he is not.’ But to which view shall we be inclined? Reason cannot decide this question. . . . A coin is being spun which will come down heads or tails. How will you wager? Reason cannot make you choose either, reason cannot prove either wrong.”

Very simply, Pascal’s Wager consists of defending faith as a reasonable behavior. The coin is tossed, the bet must be made. Is there any way at all to lessen the odds? Heads? Tails? The chances are completely unknown. All your reason, all your senses, cannot give you sufficient information to place your bet with absolute impunity. Either way you must risk. Heads, God exists; tails, he doesn’t. What do you say?

Ah, Pascal’s imaginary reader says, let’s forget the game altogether. Let’s not bet. “The right thing is not to wager at all.” Pascal responds:

“Yes, but you must wager. There is no choice, you are already committed. Which will you choose then? Let us see: since a choice must be made, let us see which offers you the least interest. You have two things to lose: the true and the good; and two things to stake: your reason and your will, your knowledge and your happiness; and your nature has two things to avoid: error and wretchedness. Since you must necessarily choose, your reason is no more affronted by choosing one rather than the other. That is one point cleared up. But your happiness? Let us weigh up the gain and the loss involved in calling heads that God exists. Let us assess the two cases: if you win you win everything, if you lose you lose nothing. Do not hesitate then; wager that he does exist.”

Existing, we are in the game. There is no default mode of sitting out. Each of us must place the bet. Pascal simply urges us to realize that, if we bet that God exists, and he doesn’t, we have given up a life of corruption for a life of virtue, and, well, that’s all folks. We really have lost nothing. If however we bet that God exists, and he does indeed exist, we have traded a life of selfishness for a life of virtue and ultimately eternal bliss. We have gained everything. On the other hand, if we bet that God does not exist, and yet he does, we have acquired a brief life of self-satisfaction and then an eternity of hell. We have lost everything.

A clear enough argument. Of course, Pascal is not attempting to prove anything. This analogy is not offered as a way to know that God exists; it is offered as a defense of choice.

Many have criticized Pascal’s Wager, and have interesting ways to pick it apart. I looked up “Pascal’s Wager” in the Stanford Encyclopedia of Philosophy, and it gives paragraphs about the probability theory behind it, including little charts and formulae that look like this: E(wager for God) = ∞×p + f1×(1 − p) = ∞. I have no idea what this means. If you can read that, then by all means, dive deep.

My interest in the Wager lies not in the betting analogy itself or its calculations, but in the necessity of it and its liminality. Either God is, or God is not. And let’s be specific here. Either God is—revealed in scripture and perfectly in Jesus Christ; or God is not—either not seen in the face of Christ, or he doesn’t exist at all, or he’s something altogether other. Like Vishnu maybe, or Thor. Put the cards face up: either Jesus is the Gateway to God, or Jesus is not the Gateway to God. We all stand poised on the threshold of choice. We can say, oh, I’m not so terribly interested in that question and then sigh, and turn our attention to more interesting things, but that is itself a choice.

Pascal saw the choice as a gamble: heads or tails. And then he weighed the risks and found that the risk of gambling “no, God does not exist” to be too great to take. As he puts it in another fragment, “I should be much more afraid of being mistaken and then finding out that Christianity is true than of being mistaken in believing it to be true.” (f. 387)

But the really curious thing to me is that placing your bet is not the equivalent of faith. Placing your bet on God is a highly reasonable thing to do, but it is not faith. If it were, you would be putting your faith in your reason, or your odds, or your luck.

All Pascal is doing is showing you that you must act. You must place your bet. There is no such thing as spiritual neutrality. So, then, faith? Where does it come from? How do we get it?

“There are three ways to believe: reason, habit, inspiration. Christianity, which alone has reason, does not admit as its true children those who believe without inspiration. It is not that it excludes reason and habit, quite the contrary, but we must open our mind to the proofs, confirm ourselves in it through habit, while offering ourselves through humiliations to inspiration, which alone can produce the real and salutary effect.” (f. 808)

Reason and habit are important, but they cannot replace “inspiration,” which alone produces faith. Reason weighs the proofs, which, for Pascal, are found in scripture, the miracles, the prophecies, and the testimonies of the saints. Habit—traditions, customs, rituals, participation—makes Christian faith its own. Yet both reason and habits must lead to “offering ourselves through humiliations to inspiration,” and if they remain simply thought and custom, they result in nothing.

Inspiration? What the heck? Now we have to have inspiration?? What if I don’t feel terribly inspired? What if reason and habit are about all I can muster? Inspiration isn’t like a toggle switch that you can just flip on. It isn’t bottled and sold. (Okay, there are a few televangelists out there that sell something similar.) Must I be completely passive awaiting some “inspiration fairy” to sprinkle me with faith pixie dust so I can fly?

So… here again we are thrust back onto Pascal’s talk of le coeur. It seems to be the key to the faith dilemma, the way to move from the gambling table to the altar.

April 2, 2013 Easter: Tripping Over Joy
Recent Comments
147 Comments | Leave a Comment
"Are u 100% sure Chp 42 already in that website??WR.MAANSHAN.INFO/P9721q"
Threetails The Ruins of Formation
"Now THAT'S chapter 69 for ya ;)NL.2633R.US\A9721nv"
gene303 A Pre-Advent Invitation: Sitting in the ..."
"and claude is also still sleeping :(lr.DAOFI.CASH/Y9721uW"
Gvwyu Jesuitae: Lessons from Ludolph
""
HungryWaffl3 Jesuitae: Lessons from Ludolph
Browse Our Archives
Related posts from Dry Bones 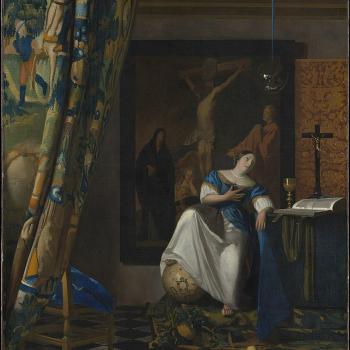