Real Stuff My Dad Says 79: Calling A Spade A Spade – The Inconvenient Truth About Josh Duggar

All that being said, if you consider the Bible to be infallible, and if you value the words written in the Book of Hebrews, then keep on reading!

Chapter eleven in the Book of Hebrews recounts the stories of what many people today call the members of the Bible’s “Hall of Faith”.  The first paragraph of chapter twelve calls these Biblical heroes a “Great Cloud of Witnesses”, and suggests that:

“since we are surrounded by such a great cloud of witnesses, let us throw off everything that hinders and the sin that so easily entangles. And let us run with perseverance the race marked out for us, 2 fixing our eyes on Jesus, the pioneer and perfecter of faith. For the joy set before him he endured the cross, scorning its shame, and sat down at the right hand of the throne of God. 3 Consider him who endured such opposition from sinners, so that you will not grow weary and lose heart.”

Basically, these verses say that we should use the faith of all the individuals whose stories precede this passage as inspiration to remove from our lives the things that get in the way of us becoming all that God has planned for us, endure life’s hard times, and never grow worn out or disillusioned by life’s distractions.  Instead, we should keep our minds set on the hope and joy that Jesus provides – even if that hope and joy lies merely in an eternity spent with Him in heaven after these days on earth. (Again… if you’re going to argue the validity of these points, that’s a different discussion that I would love to have at another time).

So… who are these Biblical heroes that we, and the Biblical author, find so much inspiration from?  It’s a lengthy list:  Noah, Abraham, Isaac, Jacob, Joseph, Moses, the Israelites who crossed through the Red Sea, Joshua, Rahab, Gideon, Barak, Samson, Jephthah, David and Samuel.  Each of them, incredible champions of faith who lived out exactly what Hebrews 12 suggests.

At least they did for most of their lives.

Each of them also had huge moments of failure.  HUGE!  Noah got drunk and danced naked in public; Abraham slept with his wife’s maidservant, then kicked her and their son to the curb (actually out to the barren desert); Isaac lied about his wife in order to succeed in business; Jacob lied about his own name in order to move ahead of his brother and steal his brother’s blessing and birthright; Joseph repeatedly boasted and bragged to his brothers, driving them to the point of them beating him and selling him away; Moses murdered an Egyptian man then ran away; the Israelites – even after being led by God Himself by a pillar of fire and cloud of smoke – worshipped a golden calf while Moses was away for a few days receiving instructions from God; Joshua slaughtered city after city, including women, children, and animals; Rahab was a whore, Gideon wouldn’t believe God’s direct messages even when God was provided one miraculous sign after another; Barak wouldn’t step up and obey God and instead made a pair of women face Israel’s enemy; Samson was so blinded by his sexual lust that he abandoned his solemn oath to God; Jephthah sacrificed his own daughter; David slept with his neighbor’s wife and then had him killed; and Samuel had more wives, drank more booze, and indulged in more self-centered gluttony than anyone.

“Oh, but those are Old Testament people.  They lived before Jesus and so they are exempt from extreme levels of criticism”, many people say.

OK, let’s look at some of Jesus’ apostles: Matthew, the former tax collector who ripped off his own people in order to pay off the Romans and overflow his own pockets; Simon the Zealot who, by association with the Zealots, likely took part in violent protests, plots, riots and uprisings against the Romans; and Peter, one of Jesus’ closest buddies – he disowned Christ in His most dire hour, chopped off a guy’s ear a few hours before, and instead of standing firm in his faith, dropped the preacher gig and went back to fishing as soon as Jesus was buried.  Or what about the author and star of nearly half of the New Testament, Paul?  Paul was a Pharisee who hunted down Christ-followers and threw them in jail merely for no other reason but for being a Christian.  He held the men’s cloaks as they threw Stephen down and pummeled his head with rocks until he died… all with young Paul rooting them on.

Now, I’m certain (at least sincerely hoping) that none of these bio-recaps are news to you.  You’ve heard these stories before.

And you ignore them.

At the very least, you glaze over them and use them as illustrations of God’s redemptive grace and how we are all sinners, unworthy of an eternity with Jesus, if not for His saving mercies. (enough Christianese for you?)

Why do I know that you ignore them?  Because your clamoring for the shakedown and teardown of modern day Davids, Peters and Pauls prove it.

From Phil Robertson to Mark Driscoll to Josh Duggar, I have read too many fellow-Christians’ blogs, tweets, Facebook posts, and columns screaming from the mountaintops to have these men tarred and feathered (or at least stripped of their careers) because of their crimes and misdemeanors.

The most recent tragedy falls on the shoulders of Josh Dugger.  Did he do wrong?  Absolutely.  Very wrong?  No doubt.  Unforgivably wrong?  Well, that’s not up to you nor me.

The only people that question applies to are the (unidentified-but-oh-so-easy-to-figure-out) girls he touched and God Almighty.  And, from every published account after published account, Josh sought and was given forgiveness from his victims.  He sought redemption from God.  He turned his life around in every way conceivable, yet never ran away from his past to the point of unsolicited confessing his sins to his then-fiancé and her father.

Granted, he didn’t confess them to you, me, or any of TLC’s viewership… because it’s none of our business!!

It happened when he was merely 14-years-old.  According to the law of the land, that’s two years too young to be registered as a sex offender.  Why is this the law of the land?  Because even our left-leaning legislators know that kids do stupid stuff to one another and can’t be held forever accountable.  It’s a rare occasion that a 14-year-old would be tried as an adult for premeditated, strategically horrific murder, much less what Josh did.

Nevermind the fact that, as I mentioned, Josh faced his victims.  They faced him.  It may not make sense to you, but they, according to reports, have forgiven him.  And their relationships have been restored.  Oh, and did I mention that the whole thing should have never been made public in the first place?  That the entire situation has been legally expunged, and therefore shouldn’t be tried in a court – not even that of public opinion!

So, when I read other Christ-followers – the same ones who will likely spend eternity with the likes of Josh, his parents, his wife, his siblings, adulterous murderer David, angry Christ-ditcher Peter, and Christian-hunter Paul – cry out for the removal of TLC’s 19 Kids and Counting from their program lineup or at least boycott of the show; removal of the Duggar family from the public eye and renouncing of all the work they do; registration of Josh as a sex offender; or collection of all the profits that the Duggar family has collected over the past several years… I’m disgusted!

You see, my bottom line is this:  If you’re going to shoot down Josh, you better shoot down, discredit, and disown Noah, Abraham, Isaac, Jacob, Joseph, Moses, Joshua, Rahab, Gideon, Barak, Samson, Jephthah, David, Samuel, Simon, Matthew, Peter and Paul while you’re at it.

And before you’re out of ammo, shoot down Jesus Christ, Himself.  It was He who instructed us:

“If another believer sins, rebuke that person; then if there is repentance, forgive. 4 Even if that person wrongs you seven times a day and each time turns again and asks forgiveness, you must forgive.” (Luke 17:3-4)

I’ve heard it said multiple times, “No wonder the population of people claiming to be American Christians is on the decline.  All people see are one group of Christians sniping another.  Who wants to be associated with that?”

As my dad often said when I was a boy, sometimes you’ve got to call a spade a spade.  Sometimes, no matter how inconvenient the truth is, it must be proclaimed.  The truth is tough.  The truth of what Josh did, what the girls have to live with, is undeniably tough.

But so is the truth that it’s none of the public’s business.

And it’s tough for us to fully comprehend that God’s grace and mercy is vast enough to redeem Josh, you, me, and the Great Cloud of Witnesses.

May 26, 2015
Summit Lecture Series: Can We Be Moral Without God? with Frank Beckwith, part 5
Next Post 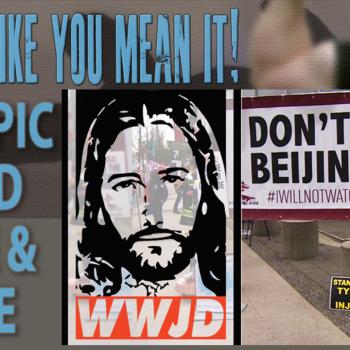