Reflections of Grace 100: How I Learned the Hard Way

Reflections of Grace 100: How I Learned the Hard Way November 5, 2015 Christian Podcast Central

At first, this period of my life was very disorienting. After years of being steeped in the rules and regulations of organized religion, I still fought with the pull of “I should be doing something.” I was angry at Christians in general. At first, I thought that many were phony in their so-called friendships. But I came to realize that I was judging them for judging me, which made me just as guilty.

When we stuff God into a box, we take away from His life and power, proclaiming that we are the only ones with the absolute truth, thus moving us into judging others.

I had begun to think that I could trust no man. Unfortunately, the religious system fueled my need for nurturing by men by producing some leaders in ministry who needed to be in total control of others.   I had a difficult time finding that acceptance from those authority figures.

Church happens when and where people share the journey of knowing Jesus together, because people are the church. It consists of open honest sharing, transparency, genuine concern about each other’s spiritual well-being, and encouragement for people to just follow Jesus, however He leads them.

For many people who don’t know Jesus, Christianity is a joke. They have witnessed Christians treating one another horribly. They watch us kick our wounded when they are down.

I think many of us have experienced much pain as we have tried to fit the life God intends for us into a box of our own making.   Many, like myself, hang in there until the cows came home, thinking we could make it better.   But eventually we learn that if we live according to the rules of men, and not the word of God, the freedom we need to grow in Him is in direct opposition, and we will not find that freedom. 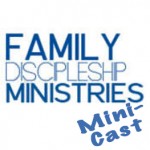 November 5, 2015
Family Discipleship Mini-Cast 10: You Can’t Love Your Spouse On Your Own
Next Post

November 5, 2015 Jesus in HD 130: How to Know God's Will for Your Life
Recent Comments
0 | Leave a Comment
"I agree. Believing we are the hands and feet, sounds cool, but I believe leads ..."
Grant The Big Picture Podcast: Are We ..."
"Psalm 137:9 has been explained over and over again. For one thing, I highly suggest ..."
Candy Smith WWUTT: Women Must Be Silent In ..."
"jordan peterson is wrong about nearly everything."
kyuss, cannabis farmer The Best Thing You’ll Hear This ..."
"But isn't it important to know why the Bible is true? Shouldn't we look for ..."
Gary M The Best Thing You’ll Hear This ..."
Browse Our Archives
get the latest from
Christian Podcast Central
Sign up for our newsletter
POPULAR AT PATHEOS Evangelical
1