Brad Stine Has Issues: Lies and the Powerful Elite

Lies and the Powerful Elite

Let’s talk about liars and the powerful elite… but I repeat myself.

Today we are going to discuss the destructiveness of lies and how they are used constantly to destroy freedoms of others while acquiring power for the elite. I won’t lie – this one is going to be good!

One of the main weapons used in the “new America” to distort the narrative of history is also, perhaps, the first sin ever recorded. It is a technique that is so powerful that it is hard to imagine a more perfect weapon.

What is the weapon? Lies.

There was a question a professor asked of his students I read once in a book that went like this: If you are in a conversation with someone and one of the participants is lying, is it still a conversation?

His conclusion was no.

But the reason, I think, is beautiful. He said, “No”, because the liar is withholding my access to reality. This was already covered, I might add, in the Ten Commandments when God said, “Thou shalt not bare false witness against thy neighbor”.

You see, just as the universe is able to maintain its extraordinary balance and function based on natural laws that God created, humans need unaltered access to truth in order to further a conversation; and most importantly reach clarity, revelation and epistemology.

For example, if I told you your house was going to catch fire tonight, and so you went ahead and hired movers to get all your belongings out of the house, paid for storage, and then got your family to safety only to find out it was a lie… There were real consequences at stake.  Behavior based on a lie would have caused you a loss of money, peace of mind, confidence in my integrity, inconvenience of a natural flow to your life… And all for one reason only: Because you responded rationally to an irrational statement. And there was a cost.

The Bible, or the Word of God, among other things is incredibly crucial in establishing reality from God’s perspective – which is, by the way, the only perspective that matters.

It is because of the Judeo/Christian worldview that the West, as we know it, was formed. And from that, came among other things: modern science, hospitals, charities, universities and the concept of equal rights among all humans.

But, the Bible also states that there is an enemy that doesn’t want this information promulgated. And that enemy, amazingly enough, is referred to as the father of lies.

Let me give you an example of a lie that you may never have analyzed.

How many times have you heard the phrase, “Religion is the number one cause of wars and deaths in human history”? It is usually heard from atheists to malign religion as poisonous.

So, where did we get the idea that religion poisoned everything? Perhaps from the late Christopher Hitchens book, “God is not Great! How Religion Poisons Everything”?

Now, look, we all have known religious people that were incredibly hateful, judgemental and self righteous; and so to make the leap that religion is what made them that way isn’t a difficult deduction to make. BUT…There is a very important point I need to make if this is going to be of any assistance to you.

The statement, “religion has caused the most wars and deaths in human history” is not only a lie, it is LITERALLY THE OPPOSITE!

Reading in Charles Phillips and Alan Axelrod’s three-volume Encyclopedia of Wars, which chronicles some 1,763 wars that have been waged over the course of human history, the authors categorize 123 as being religious in nature – which is an astonishingly low 6.98% of all wars. However, when one subtracts out those waged in the name of Islam (66), the percentage is cut by more than half to 3.23%.

Now, the Inquisition and the 30-Years War were in the name of Christianity, just so as you think I’m not being fully fair about history.

But the historical truth is, non-religious motivations and naturalistic philosophies bear the blame for nearly all of humankind’s wars. Lives lost during religious conflict pales in comparison to those experienced during the regimes who wanted nothing to do with the idea of God between Joseph Stalin, Mao Zedong, Adolf Hitler, Chiang Kai-shek, Vladimir Lenin, Hideki Tojo, Pol Pot, almost 170 million innocent human beings suffered at the hands of dictators and military leaders who were driven by atheism, driven by Marxism and fascism, driven by Darwinistic principles of race superiority.

In other words, more human misery and death was caused in the 20th century by atheists and evolutionary theories on race superiority then all the deaths from all the “religious wars in all of history combined”.

That is simply historical truth.

So from this day forward, if you ever hear someone use this phrase as a historical truth, keep in mind they are either ignorant – which is fine, ignorance can be cured with education – or they know better and say it anyways because the lie fits their agenda.

That doesn’t just make them wrong, it makes them evil, which is exactly what we have learned is always the result of what happens when atheism controls the State. 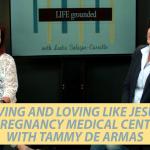 December 11, 2020 Life Grounded: Interview with Tammy DeArmas, CEO of Alternatives Medical Clinic
Recent Comments
0 | Leave a Comment
"Does the terminally unfunny Stine mention how hundreds of right-wing evangelical fascists tried to destroy ..."
Jeffrey Brad Stine Has Issues: How “The ..."
"This reminds me of the time Stine's mom told him she'd rescue her battery-operated ladies' ..."
John (not McCain) Brad Stine Has Issues: Dear People ..."
"Brad Steine: another bitter grievance-mongering Bible-thumper who hates freedom."
Wolf of Odin Brad Stine Has Issues: Lies and ..."
"some wisdom from another branch of the family:""I do not believe that just because you ..."
Christiane Smith Brad Stine Has Issues: Pro-Life VS ..."
Browse Our Archives
get the latest from
Christian Podcast Central
Sign up for our newsletter
POPULAR AT PATHEOS Evangelical
1