Brad Stine Has Issues: Why We Should Ban Airbags

Brad Stine Has Issues: Why We Should Ban Airbags March 2, 2021 Christian Podcast Central

Why We Should Ban Airbags

Cars were one of our downfalls.

They’re too fast and too safe. What do I mean? Instant gratification. The problem with Americans now is we want everything now. Fast. Now. We’ve got to make it hard to get someplace because when it’s hard, you appreciate it when you get there. So, we’ve got to make the cars more dangerous. First thing we gotta do is: We gotta start taking these airbags out of the cars. Airbags. See, these kids don’t know what I’m talking about. Let me tell you something, buddy. When I was growing up, they used to have dashboards made out of metal. Got in a wreck, you paid for it! You were weeded out so that the good drivers had more room. That’s what America was – it was hard. But they don’t know any difference because everybody wants airbags in this country.

Front bag, side bag… I don’t understand the principle of a bag. I think a bag takes away from personal responsibility. Why should you have to become a better driver if you know a big soft bag is gonna protect you? It defeats the purpose.

I know… it should be an anvil!

Certainly, everybody would be nice to each other. We wouldn’t need laws. People would let everybody merge. People might even start using their turn signals again! Oh, where was I when the memo came out that the turn signals are just an option now in this country? How narcissistic have we become? It’s about instant gratification and not respecting common courtesy anymore.

That’s what I’m talking about. That’s what I mean. But the kids don’t know what I’m saying. They’ve always grown up with a front bag, and side bag, bag in a bag. It’s like a fun house to get in a wreck in these cars these days!

We’ve made it too easy for kids. They’ve always had a bag. And when adults set them in the front seat, they had a big old seat belt – a MANDATORY seat belt! Not me. They stuck me in the front seat with no airbag, no seat belt protecting me. Mom’s arm – that’s all I got. how many crash dummy tests you think it took for them to realize Mom’s arm ain’t working?

See all these scars on my face? I had to keep going through windshields so kids today could get airbag technology. And, do they appreciate it? No! We’ve made it too easy on the 16-year-olds today. They’ve always grown up with a bag in a bag in a bag and a seat belt; and the first five years of his life, he was in the back seat in a five-point harness car seat so he couldn’t get hurt!

And you all probably learned how to ride a bike wearing a helmet, you big babies!! 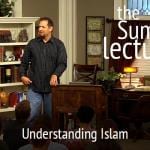 March 5, 2021 Summit Lecture Series: Understanding Islam
Recent Comments
0 | Leave a Comment
"Where is the Christian 'god' when persecution arises?https://friendlyatheist.pat..."
Christian Sovereign Artsakh: Stop All Forms Of ..."
"No one says women can't be successful unless they have an abortion. Most of the ..."
Maine_Skeptic Life Grounded: Women, Abortion and Success
"A very relevant question, in a most excellent article! Thank you."
feralcatadvocate47 Life Grounded: Women, Abortion and Success
""When I die, I will be stuffed, mounted and sent to the Smithsonian Institute in ..."
Jeffrey Brad Stine Has Issues: Why It’s ..."
Browse Our Archives
get the latest from
Christian Podcast Central
Sign up for our newsletter
POPULAR AT PATHEOS Evangelical
1

Craig's Atonement and the Death of Christ-- Part...
Q. Like with the statement ‘forgiveness offered is not the same as...
view all Evangelical blogs
What Are Your Thoughts?leave a comment
Copyright 2008-2021, Patheos. All rights reserved.
error: Content is protected !!