Today is the feast of the Assumption. Yesterday was the day that I fell into a sin (among, unfortunately, other sins) that I hadn’t fallen into since I was a teenager. In fact, this particularly troublesome sin was one I hadn’t even thought to be on guard for, it had been so long since I had been tempted to it. And then, bam!, there I went falling into it without even realizing. It really sucked.

I was texting a good friend of mine about it, and he told me that when we fall back into sins like this,

It gives us some small glimpse of what life would be like if we completely abandoned God…because as bad as I am, I would be so unspeakably worse without grace.

This is not unlike the reality of Mary. See, before there was Mary, the world wasn’t just getting a small glimpse of what life was like if we completely abandoned God. In the words of St. Athanasius, humans, post-Fall, were “in the process of becoming corrupted entirely, and death had them completely under its dominion.” We were getting the home run equivalent to seeing life without God. Yet, despite the darkness that our hearts can hold, we also have Mary of whom, alone out of all human persons, we can proclaim et macula non est inte—there is no blemish in you.

Grace in the proper and deepest sense of the word is not something that comes from God, it is God himself. Redemption means that God, acting as God truly does, gives us nothing less than himself… ‘Full of grace’ therefore means, once again, that Mary is a wholly open human being, one who has opened herself entirely, one who has placed herself in God’s hands boldly, limitless, and without fear for her own fate. It means she lives wholly by and in relation to God.

In this, Mary is wholly and radically embraced by divine love. Her fiat, her Yes is, as Ratzinger says later, “wholly grace” all the while remaining no less wholly hers. The grace Mary received “does not cancel freedom; it creates it.” This is the hope we have in Mary as the first fruit of Christ’s mission: Mary was given the grace not merely to obey the word of God, Mary was given the grace to carry within her own flesh the very Incarnate Word of the Father.

This sounds an awful long way from falling into/throwing ourselves into sin. Yet, the impossibility of Mary is what gives us hope. That any human should be graced to offer such a profound Yes to conformity with God, that any human should be without stain, is astonishing. This is, perhaps, a small part of why so many of Our Lady’s feast days are holy days of obligation: without Christ, Mary could not have had the freedom found in grace to be most fully herself. If God can preserve Mary from all sin, it seems that it is possible that He will one day overwhelm me with His love, preserving me from all sin.

If any human can say Yes to God in the profound way that Mary could, there is hope that I could say Yes to God sufficiently that I might become a saint. Mary is the Mother of God, and how easy and hard that is. Easy for God and hard for her. But if she can be humble enough to be immaculate, perhaps even when I sin, I can be humble enough to reach out and touch the hem of the garment of my God.

I’m not saying habitual sin doesn’t suck. I’m not saying that revisiting sins you know you’ve overcome, only to find that you haven’t so much overcome them as that they’ve been dormant like cicadas, isn’t a rather day ruining realization. And, I’m not saying that we will never sin again, because we have those inclinations and we likely will. We might even feel all the guilt and shame that come from failing at something we desperately want to do well.

But what I am saying is that Mary is without sin. Mary is the Mother of God. Mary said and continues to say the most profound Yes and profound acceptance of God’s will that any human person ever has, a Yes that gave her a child, a Yes that pierced her heart, a Yes that saw her watch her Child die a horrific death. Yet, she did not suffer the grave. She was Assumed, body and soul, into Heaven to be with the Son who suffered that horrific death for her sake. He also suffered that horrific death for our sake, so that we might die to the world and rise in Him. Mary’s life manifests the profound love of God: the world was in darkness and one of our own was called to bear forth the Light.

When our own lives become dark with sin, I have realized that I need to turn to God and pray that He with send forth His Light into my life. After all, the Virgin birth/earthly mission/dying/rising from the dead/sending forth of the disciples part was the hard part, and that already happened.

The world collectively was at least as bad as I am in my worst moments, and God loved us enough all together to do so many impossible things. How much more ought I to hold on to hope that, no matter how dark it seems, He can still love me, He can still forgive me, and He can still redeem me. Mary received the grace to be conceived without sin and assumed into Heaven. I simply need the grace to confess my sins and return to Him. If He can do such wondrously difficult things for Mary, I can pray with confidence and hope even when I have fallen that He will be able to love me anyway. 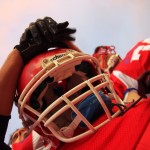 August 23, 2016 The Catholic Church is Not Your Sports Team
Recent Comments
0 | Leave a Comment
Browse Our Archives
get the latest from
Catholic
Sign up for our newsletter
POPULAR AT PATHEOS Catholic
1