For Christians, the word conspiracy takes on a different meaning when we understand how the Spirit of God works to breathe justice into and among us.

The word complicit is Dictionary.com’s Word of the Year.  It means “choosing to be involved in an illegal or questionable act, especially with others.”  Searches for the word spiked over questions of collusion with the Russians by Trump and his team. In addition to the Russia scandal, every member of the Trump Administration and most of the Republicans in Congress have been complicit with the agenda of climate-change denial and environmental deregulation, racial and ethnic oppression, and corporate autocracy dictating the agenda of America.

Complicity is often associated with the word conspiracy.

When I looked up that word on the Internet, I found all kinds of examples of conspiracies.  There was an example of the energy utilities conspiring to subvert the Clean Air Act by hiding the evidence of massive air pollution increases from coal-fired power plants.

And most people will recall the corporate conspiracy of the tobacco industry which lied to the American people for decades about the health risks of smoking.  Not to mention the conspiracies at Enron and World Com that bilked thousands of people out of millions of dollars.

But perhaps the most frightening conspiracies of them all are the terrorist sleeper cells, sending out men and women to scout out targets for terrorist attacks, networking with each other by the Internet and cell phones, conspiring to explode bombs and crash planes and wreak havoc on the world.

Conspiracy can be a frightening word.  But do you know what it actually means?

“Con” means “with.”  “Spiracy” means “breathe.”  It derives from the Latin word “spirare.”  Conspiracy means, literally, “to breathe with.”

And that’s what happens when there is a conspiracy.  A group of people intent on a certain surreptitious goal whisper together in the shadows, breathing the same air of intrigue and criminal intent.  They work out a secret plan to achieve an evil or illegal end.

But maybe it’s time for Christians to rethink – and even reclaim – the word “conspiracy.”

Did you know that John the Baptist was the center of countless conspiracy theories in his day?

This wild figure, baptizing people in the wilderness by the Jordan River, aroused the suspicions of the authorities who worried that he might be inciting the people to rise against the political and religious leaders of the day.  In fact, they go into the wilderness to directly confront him, as we see in today’s reading.  In the Gospel of John they want to know who he works for, who he is. They suspect he is the mastermind of a secret plot.

It turns out that John is simply a low-level operative in the conspiracy.  He tells them, “The one you’re after . . . well, let’s just say I’m not even worthy to untie his shoes.”

And then the very next day, the mystery man shows his face, right there on the Jordan River.  It’s Jesus, and he is, in fact, baptized by John.  And do you know what John says?

It comes from the Latin word, “spiritus,” which is derived from the word, “spirare.”  “To breathe.

Do you see the connection?  Conspiracy – “to breathe with.”  Holy Spirit – “sacred breath.”

Perhaps we are to suspect that there is a con-spiritus going on here.  A holy conspiracy, if you will.

What do you do if you suspect a conspiracy?  You begin digging a little deeper, looking in places you wouldn’t normally think to look, asking the right questions, and finding out just who else is involved in this conspiracy.

So let’s dig a little deeper, and look in an out of the way place where no one would think to look.  Look at the other reading we have today, Luke 1:46-55.  “My soul magnifies the Lord, and my spirit rejoices in God my savior.”

Mary is talking about God scattering the proud in the thoughts of their hearts, bringing down the powerful from their thrones, lifting up the lowly, filling the hungry with good things, sending the rich away empty.  That’s a subversive plot if I’ve ever heard one!

This is radical stuff here!  Mary is talking about turning the world upside down, upsetting the social order.  This is about the poor getting what the rich have, toppling governments, bringing down all the arrogant leaders.   What we have here is indeed a holy conspiracy.

It’s a conspiracy for smuggling in the Kingdom of God.

And who is speaking these words?  An unwed, teenage girl, pregnant and living in a little backwater town called Nazareth.  Oh, that’s a perfect cover for this secretive plot.  No one would ever suspect someone like Mary.  She’s a girl, first of all.  She has no money, no power, no voice.  What better person to smuggle in the Kingdom of God than a poor, Hebrew girl?

Apparently the prophet Isaiah was in on this conspiracy a long time ago.

He says the Lord has anointed him to bring good news to the oppressed, bind up the brokenhearted, proclaim liberty to the captives, and release to the prisoners.  What?  This is not good.  Not only are we going to see the poor get their share, we’re going to see those enslaved released?

Not just the poor.  Not just prisoners.  But everyone who has seen their homes bombed and their families killed. In fact, all the generations of those who have ever been victim of political and military devastation – they’re going to rise up, too.

This conspiracy is more widespread than we thought.

Because you know who else speaks these very words in the Gospel of Luke, the Fourth Chapter?  Jesus.  Listen to this:

“The Spirit of the Lord is upon me, because he has anointed me to bring good news to the poor.  He has sent me to proclaim release to the captives and recovery of sight to the blind, to let the oppressed go free, to proclaim the year of the Lord’s favor.”

This was the passage Jesus chose when asked to read from the Torah in the synagogue when returning home to Nazareth after being baptized and fasting in the wilderness.  You see what we have uncovered here?  Jesus is the chief operative in this conspiracy.

And what better cover for the top operative in the secret plot to smuggle in the Kingdom of God?  A no-name carpenter turned itinerate preacher.  Somehow he found a way to infiltrate the matrix of our world. And he is intent on initiating the in-breaking of this Kingdom of God.

We like to think of Jesus as a precious, newborn baby boy at this time of year.  But make no mistake – this sweet little child is going to grow up to become a very dangerous man to the political and religious establishment.

What he stands for is against everything the Establishment has worked so hard to put into place.

He’s so dangerous, in fact, that he will, like John, be arrested, thrown in prison, tortured, and eventually killed.  An enemy of the state, they’ll call him.  The worst threat imaginable to the religious and political leaders.  And they will publicly execute him in the most disgraceful way by hanging him on the ignominious cross.

They’ll wash their hands and move on, congratulating themselves on quashing the conspiracy and getting rid of public enemy number one.

But what they won’t realize is that they have not snuffed out the conspiracy.  They have, in fact, made it worse.  A whole new crop of operatives will pop up in Jesus’ place, and spread all over the known world.  Apostles, they’ll call them.  And one in particular, who goes by the code name “Paul,” will establish sleeper cells called churches, and send secret letters, like the one we read today, addressed to the operatives in Thessalonica.

“May your spirit and soul and body be kept sound and blameless at the coming of our Lord Jesus Christ,” he says in Chapter 5, Verse 23.

Pretty soon there are thousands of churches, millions of these operatives, who now go by the code name “Christian,” infiltrating the matrix, all over the world.

How many of you will admit to being baptized?  Go ahead, raise your hand – I promise not to report you.

You have all been enlisted by God into this con-spiritus, this holy conspiracy.  A high level operative, known as a pastor or priest, laid hands on you and doused you with water, just like John did to Jesus. And she or he spoke the words of initiation. “I baptize you in the name of the Father, and of the Son, and of the Holy Spirit.” There is that word again – Spirit!

You are a part of the conspiracy, too.

Each one of us extends God’s holy conspiracy into the world,  doing our own part to smuggle in the Kingdom of God.

But you’re not really sleeper cells.  You’re actually living cells that breathe hope into this world.  You – individually and collectively – are a counter-conspiracy group that aligns itself with the poor and the hungry.  You look for ways to speak truth to power and overturn the social order when it oppresses people.   You are con-spiritus, breathing with the prisoners and the generations who cry out for justice and restoration.

You are God’s holy conspirators.  May the Holy Spirit fill you this Advent Season.

December 6, 2017
#MeToo, #ChurchToo: The Church is Facing the Truth About Its Sexism
Next Post 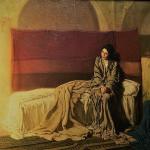 December 18, 2017 Mary, Pondering and God-bearing: Part One
Recent Comments
0 | Leave a Comment
Browse Our Archives
get the latest from
EcoPreacher
Sign up for our newsletter
POPULAR AT PATHEOS Progressive Christian
1