Patheos Explore the world's faith through different perspectives on religion and spirituality! Patheos has the views of the prevalent religions and spiritualities of the world.
Things are heating up over there in Hong Kong over the movement known as Occupy Central with Love and Peace. There’s going to be a rally on August 31 to deliberate over what sorts of acts of civil disobedience the movement will take in response to Beijing’s newly proposed framework for Hong Kong’s electoral reform. This is because while the Occupy Central movement put forward a proposal for Chief Executive candidates to be determined by civil nomination, Beijing has de facto rejected the proposal by insisting on choosing the candidates. Universal suffrage, however, seems to be still on the table. All of this comes on the heels of an anti-Occupy Central rally that was held in Central, as well as several seemingly political investigations of pro-democracy legislators. To add even more alarm in terms of the parallels to the Beijing Spring in Tiananmen Square in 1989, armoured vehicles have been reported to be entering Hong Kong from China.

While the movement doesn’t seem like it could care less about ‘Western’ support — it’s a movement for democracy through the political agency of Hong Kong people — it is certainly of public interest to those outside of Hong Kong, including everyone who don’t speak Cantonese. I’ve made my case repeatedly on this blog that Greater China geopolitics matter, so I will not reiterate that here.

That all being said, there seems to be very little news that is getting out of Hong Kong, except through HuffPost Live’s conversation with Rebecca Liao and Gordon Chang and the often-very-funny-but-very-serious blog Hong Wrong. Fortunately, as I’ve also said elsewhere on this blog, I’ve never felt that it was my duty as an academic to break the news.

In fact, in the academic spirit of the Occupy Central organizing bodies — its leader Benny Tai Yiu Ting is a law professor and a student group called Scholarism is heavily involved as well — this post is a review — not unlike one of those exam review sessions that, if you had nice professors and teaching assistants in university, you might have been privy to at one point too!

In that spirit, I am reposting a little primer that I wrote in July to make sure you all are caught up before things get to a boiling point. Here it is:

As Hong Kong returned under the sovereignty of the People’s Republic of China (PRC) in 1997 from over a hundred years of British colonial rule, the incoming government of Hong Kong worked with various civil societies to draft a constitution called Basic Law. The overall legal framework is that Hong Kong exists in a ‘one country, two systems’ arrangement with Beijing’s central government, which means that Hong Kong is a Special Administrative Region of China that makes policies that are in line with Basic Law as a legal constitution.

Most of the public controversies in Hong Kong since 1997 revolve around how Basic Law is actually put to work and whether Beijing is actually respecting Hong Kong’s autonomy under the ‘one country, two systems’ framework. Here are some examples:

These constitutional controversies bring us up to the last two years. The 2012 Chief Executive election was a political spectacle that revealed that both the sitting Chief Executive, Donald Tsang, and the two viable candidates, Henry Tang and C.Y. Leung, were all given to corruption of some sort — Tsang by associating with tycoons and triads, Tang by building an illegal structure at his home (he blamed his wife — and then it was revealed that he had had a mistress!), and Leung by being allegedly a secret Community Party member, allegedly proposing violent force to crack down on the 2003 7/1 Demonstration, and definitely also having an illegal structure in his house too (although this was discovered after the election). Despite the public unveiling of such corruption, the 1200-person Election Committee elected Leung as the Chief Executive. You can imagine how popular he has been.

Under Leung’s watch, there have been various episodes in which Beijing has been tightening its grip. The most clear one came in the summer of 2012, when a national education curriculum proposed by Beijing was decried by Hongkongers as a ‘brainwashing’ campaign. Also, with the various clarifications about the future Chief Executive candidates, the whole idea of democracy in Hong Kong is looking like it will have some serious ‘Chinese characteristics’ — and by that, one does not mean ‘cultural’ characteristics, but the unique political characteristic of everything being centrally orchestrated by Beijing.

Enter Occupy Central, or more properly, Occupy Central with Love and Peace. While pro-democratic activism has gone on for a long time and comprises many civil society groups that range the gamut from left to right, Occupy Central refocuses the key question on precisely what Basic Law means, what ‘one country, two systems’ means, and whether a democratic polity that abides by international standards per Article 45 can actually be achieved. This core question — phrased almost like an academic research question — is hardly a surprising approach given that the mastermind behind Occupy Central is University of Hong Kong constitutional law professor, Benny Tai Yiu-ting. Along with Chai Wan Baptist Church’s pastor emeritus Rev. Chu Yiuming and Chinese University sociologist Chan Kin-man, Tai has organized a series of events focused on educating the Hong Kong public as to what a ‘deliberative democracy’ looks like. Called ‘Deliberation Days’ (or in colloquy, ‘D-Days’), Occupy Central’s events attempt to bring together Hong Kong citizens to deliberate — i.e. to argue with each other and to hear each other’s different opinions — over how the Chief Executive should be elected. While the end goal is universal suffrage, Tai’s democratic public is not organized only by voting citizens, but deliberating citizens. From these deliberations, three proposals have emerged from various civil society groups as to how the elections should be conducted; all of them involve a civic nomination, i.e. instead of Beijing choosing the candidates, the candidates should be nominated by the people. These three proposals were put to vote between 22-29 June 2014 in an unofficial poll known as PopVote. The timing couldn’t have been better, as shortly before PopVote, Beijing’s State Council issued a white paper clarifying Beijing’s sovereignty over Hong Kong in the practice of ‘one country, two systems.’ In the ensuing furor, almost 800,000 votes were cast, a proposal was chosen, and the entire affair was roundly condemned by Beijing as ‘illegal’ (though Tai has said that he’s not precisely sure what exactly is ‘illegal’ about it, other than it is being called illegal). This year’s 1 July Demonstration has in turn focused on the question of Hong Kong’s autonomy, and a student group Scholarism also organized a rehearsal occupation of Chater Road, from which 511 people were arrested. This is because Tai has said that the end game of Occupy Central, should the Beijing government not heed the voice of the people, is to perform civil disobedience acts to occupy the Central district, i.e. the downtown central business district, later this year.

So that’s what we have on the table: Basic Law. One country, two systems. Political corruption. Occupy Central. All of these are constitutional questions.

NOW YOU KNOW. Keep an eye on Hong Kong, people. It matters! 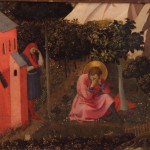 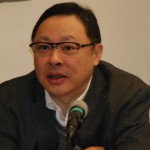 September 2, 2014 Benny Tai as a political theologian, or what Elizabeth Stoker Bruenig might have to say about Occupy Central #HongKong
Recent Comments
0 | Leave a Comment
"I can't believe you would consider the theological lightweight Kilby as a proper critique of ..."
antoniodec Fiat mihi secundum verbum tuum: on ..."
""Milbank criticizes Balthasar for being apolitical in his aesthetic reflections, and I can see how ..."
antoniodec Reading Sobrino on Óscar Romero and ..."
"the word is receptive, which has nothing passive about it but could be the most ..."
antoniodec Fiat mihi secundum verbum tuum: on ..."
"One can never "go home," not in this life."
billwald I’ve found my way home: on ..."
Browse Our Archives
Related posts from Eastern Catholic Person