I haven’t blogged for a little bit because I’ve been getting ready for the beginning of the quarter here at Northwestern University. As I’ve said before – and I’ll never cease to reiterate – my academic competencies are in geography, Asian American studies, and religious studies and only have to do in a very tangential way to my life as an Eastern Catholic person. Unfortunately for my readers, this blog is about the stuff about which I am the least competent, which makes for a lot of fun until the trolls come to call. Thankfully, I’m so unserious about the whole thing that I really only have about three astute readers who really hate my guts and tell me so, which is probably a good cue for a way forward maintaining what Lutheran theologian Marva Dawn calls the ‘hilarity of community.’

But it occurred to me on my commute to work this morning that I had – against my own will, it seems – brought the two worlds together. The way that I had done that, it turns out, is in my ever-evolving office decor. In previous offices, I haven’t been so good about decor, and I still don’t have any family photos to show (which I should get on!). However, my Patheos colleague David Russell Mosley once talked about his office decor, which includes icons that appear to be both canonical and uncanonical in Byzantine terms.

I also have canonical and uncanonical icons in my office, as well as another set of icons on my desktop (this is a lame joke). Over the next week, I think I’ll try to blog through what each of these icons mean to me and why they’ve ended up in my office.

But today, I think I want to talk about why I have icons, canonical and uncanonical, in my office. For Mosley, it’s because he wants to surround himself with beauty, and I think he’s right. But as a wise priest said to me recently, it’s also about being simply present – to be present with G-d and to have G-d present with me, as I am present to my neighbours as my neighbours are present with me. My Byzantine Catholic friend Chase Padusniak agrees when he says to pray with icons:

Sitting, allowing the icon to grip you with its unmoving eyes or with the contour of seemingly endless lines, flowing here, then there, but always to a point worthy of one’s utmost concentration. Concentration then dissipates into emptiness, a sense of allowing the icon, so to speak, to look at you—the receptacle, the sinner in need of hearkening to God’s word, of accepting His grace.

Eating Peaches recently wrote a piece on the furor of the Catholic blogosphere on how the online Twitter personality This Catholic Girl catfished this same Chase and – interestingly enough – spoke about the use and misuse of icons. When an icon is an ideal that you want to become, it’s not really an icon – it’s a projection of your own selfhood into an image and can wreak havoc because, as Slavoj Žižek points out, it’s a form supported by false consciousness. It’s only when an icon is someone else, an other who looks at you, that it’s really the presence of the holy shining with Uncreated Light. It’s more than decor. It’s a way of concretizing what I know intellectually – that there is no time when I am truly alone in my office because I am in the presence of G-d together with the holy women and men who are with him in paradise.

I teach in Asian American studies. Over the next week, I’ll write about what that is, at least as necessary, but at this point, suffice it to say that I’m going to have pictures in my office that don’t count as icons, including the big poster I have on the wall of Our Lady of Ferguson and All Those Killed By Gun Violence. That’s because I want to have images up on the wall that will keep me focused on what I do, which right now includes research and teaching on contemporary occupy movements as emerging cultural and theological geographies. I’ll have more up there in due course. I’ve also got a scene from my favourite film short of all time, Wong Fu Productions’s ‘A Peace of Home,’ on my computer desktop. Finally, I have a coffee maker.

But I also have a little icon corner on the eastern corner (facing due east, as it turns out) of my L-shape office. In the centre is Andrei Rublev’s Trinity, flanked on the left by the Theotokos of Częstochowa and on the right by Christ the Teacher.

Finally, I have a big poster up for my new book. Maybe I should write about that too.

I hope to write about all of these images, canonical and uncanonical, over the upcoming week or so. I wouldn’t say that I’m ‘integrating faith and work’ – that feels so depersonalized, abstract, and ideological. Instead, I think what I’m doing – and I’ll have to blog through this to be sure – is that I’m putting up reminders that the grace of G-d permeates my secular work.

Let us therefore be filled with the Holy Spirit and coffee! 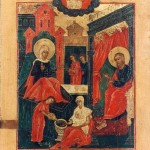 September 12, 2016
A prayer for Chase Padusniak, on the Leave-Taking of the Nativity of the Theotokos
Next Post 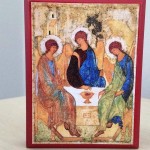 September 20, 2016 Rublev's Trinity helps me remember what I'm building with hospitality (Icons in my Asian American studies office - #2)
Recent Comments
1 Comment | Leave a Comment
"I can't believe you would consider the theological lightweight Kilby as a proper critique of ..."
antoniodec Fiat mihi secundum verbum tuum: on ..."
""Milbank criticizes Balthasar for being apolitical in his aesthetic reflections, and I can see how ..."
antoniodec Reading Sobrino on Óscar Romero and ..."
"the word is receptive, which has nothing passive about it but could be the most ..."
antoniodec Fiat mihi secundum verbum tuum: on ..."
"One can never "go home," not in this life."
billwald I’ve found my way home: on ..."
Browse Our Archives
Related posts from Eastern Catholic Person