Theophany with the Orthodox in the cold

Theophany with the Orthodox in the cold January 5, 2017 Justin Tse

I’m sitting in a coffee shop in Chicago’s Old Town waiting for the Vigil for Theophany to start at the Orthodox Church in America (OCA) cathedral. They’re offering three services out here at Holy Trinity, and I managed to miss the most important one already, according to my spiritual father. This morning at 8 am, they had the Vesperal Divine Liturgy of St Basil the Great, which is when all the Theophany readings are done. Tonight, they are having Vigil, and tomorrow morning will be the Divine Liturgy of St John Chrysostom, with the Great Blessing of Water. I’m a little bummed at having missed the Vesperal Divine Liturgy this morning, but I honestly could not get up because I got transferred onto the red-eye from Seattle to Chicago on Tuesday night, I taught yesterday, and I was completely out of commission until about noon today (a non-teaching day for me). They’re not having Holy Communion tonight, so I’m loading up on caffeine, and even if they did, I probably should refrain because the entirety of Orthodox Internet would descend in wrath upon me if I presented myself.

It’s also really cold here, and I think that is freezing me into reflection about this interesting conundrum into which I’ve gotten myself. To go further than Chase Padusniak’s primer on Eastern Catholic Churches, I don’t think it’s a stretch to say that the only thing that technically divides Eastern Catholics from the Orthodox is communion with Rome. I don’t really want to get into the accusations about ‘latinization’ but not because it’s embarrassing for us – I’m fine with being embarrassed, but I learned early on in my blogging career not to embarrass the Orthodox (because, again, when you do, the wrath of all of Orthodox Internet descends on you).

The cold is causing me reflection because it took me about an hour and a half to get out here from Evanston on public transit. I honestly had some internal debate about whether I should come out for Theophany, but as the afternoon went on, I decided to throw in the towel with all my Cascadian fears of the cold and just come out. For what it’s worth, it’s actually about as cold in Vancouver as it is in Chicago right now.

I’m often a little nervous to show my face in an Orthodox temple – much less blog about it – because I am Eastern Catholic. If you’ll forgive the pun, it’s not really because I’d be left out in the cold for communion. It’s more because of all that’s out there about us being the ‘bleeding wound’ of the Body of Christ and so on and so forth. Thankfully, I’ve been more than welcome when I’ve gone in the past to Holy Trinity for Vigil, but with all the stuff out there on Orthodox Internet where the level of anger against us seems like a genre unto itself, it’s all just a little nerve-wracking. I always have to remind myself that Orthodox Internet is not the sum totality of the lived experience of the Orthodox, and because of that, I always look forward to engaging with my Orthodox sisters and brothers, especially at services where communion is not offered but where the warmth of hospitality is always offered. I am often reminded also of the stories of some of my Latin Catholic friends who have fallen in love with Eastern Catholicism but have to worship with the Orthodox sometimes because of distant commutes, and of stories in Frederica Matthewes-Green’s Facing East about friendship with Eastern Catholics (this was the first book I read in my catechumenate), and of stories of the double communion that motivated Archbishop Elias Zoghby’s project to find ways forward for the Orthodox and Catholic churches – and suddenly, I am not so nervous anymore, especially when attending a service when communion is not being served anyway (unless they decide to surprise me tonight at Vigil).

There are many reasons why I became Eastern Catholic instead of Orthodox, and there are a number of reasons that I’m going to the OCA cathedral for Theophany. I won’t enumerate any of my reasons on the first point as it will also trigger a chain reaction on Orthodox Internet, but at the risk of embarrassing my own church, I will say something about the second reason. The first thing is that I’m an incorrigible adherent of the Newer Calendar, partly because adjusting my preferences for the Older Calendar just for convenience feels a little disingenuous. The second reason is that I’m not Ukrainian, so I wouldn’t be able to understand any of the services on the Older Calendar anyway, at least the ones I know to be offered here in Chicago. The third reason is that I don’t see any services in the Eastern Catholic temples that are accessible for me by public transit, but the OCA cathedral is somewhat accessible. Accordingly, that’s where I am for Theophany.

Let the glory of G-d plunge through the cold of all such politics of identity, as lit candles are plunged into the water in the Great Blessing. Let the warmth of our hospitality and Christian love melt this bitter cold that is freezing the two cities – Vancouver and Chicago – that I love so much. Let all creation see the glory of G-d as he appears to us in Jesus Christ.

Christ is baptized! In the Jordan by John! 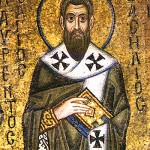 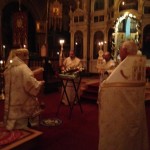 January 5, 2017 The baptism of Christ chases the dragons out of the water, freeing me from my obsession with identity
Recent Comments
0 | Leave a Comment
"I can't believe you would consider the theological lightweight Kilby as a proper critique of ..."
antoniodec Fiat mihi secundum verbum tuum: on ..."
""Milbank criticizes Balthasar for being apolitical in his aesthetic reflections, and I can see how ..."
antoniodec Reading Sobrino on Óscar Romero and ..."
"the word is receptive, which has nothing passive about it but could be the most ..."
antoniodec Fiat mihi secundum verbum tuum: on ..."
"One can never "go home," not in this life."
billwald I’ve found my way home: on ..."
Browse Our Archives
get the latest from
Eastern Catholic Person
Sign up for our newsletter
POPULAR AT PATHEOS Catholic
1

Cancel Culture? Or Actions and Consequences?
On the Catholic Beat
Related posts from Eastern Catholic Person