The baptism of Christ chases the dragons out of the water, freeing me from my obsession with identity

I am so glad to have gone to the Vigil of Theophany at our local Orthodox Church in America (OCA) cathedral here in Chicago. We were a small crowd, as Vigil services usually go, but the kliros was simply incredible (as usual) – to the point where the guy behind me started humming along, and I started catching myself singing along. I usually don’t know what to do in an Orthodox temple when nobody is singing, but I felt the music just come out of me this time.

Bishop Paul was there. He looked at me with a gaze that smacked of curiosity (I think) as the kliros went into the usual beginning. My Byzantine body went into all the motions automatically, reverencing at the Trisagion, the Glory Be, and the Come Let Us Worship. I had actually seen him before at my first vigil there maybe last August; after venerating the Gospel, I went up for the blessing, and he asked for my name. He actually asked for my name this time too – I get the sense that he’s a really nice guy and good pastor. I think I’ll be back for more Vigil services on weekends. They’re quite sparsely attended, but again, the kliros’s singing is incredible. Also, as an added bonus, I’ll get to learn Kyivan tones instead of my usual Galician; I mean, who doesn’t want more tones in their Byzantine arsenal? Go to random temple! Deploy bass at will!

We got through this Vigil service, and after giving the blessing, he turned around to the few of us in the sanctuary and began speaking.

He explained to us that this feast is special because what happened when Christ was baptized in the Jordan was that he chased the dragons out of the water, as some of the psalms and stichera also say. You need water for life, he said, but sometimes there are things in the water that are bad for you, and you might get sick or not feel well, which is why we buy water filters and bottled water. Water is how we are given life in baptism, and Jesus is preparing those waters for us by chasing the dragons out of it. This is what it means when we plunge the cross into the water, for it is by Christ’s death on the cross that the waters are ultimately cleansed.

And then he began to reflect on the readings that I had missed from this morning’s Vesperal Divine Liturgy. In fact, I was so glad that he went into this because I felt so bad about missing out on the Old Testament readings on creation, the exodus, the prophets. I really enjoy those, and he caught me up, all the way to the epistle reading where Holy Paul the Apostle writes to the church in Rome about baptism getting rid of the old man so that the new man can be born out of the water, just like how the waters of the Red Sea covered Pharaoh’s armies. He wanted us to see the continuity between the two testaments, that the blessing of the water comes directly out of the Hebrew tradition.

I came home to a comment on one of the groups on which I had posted the previous post. The commentator asked: ‘What’s up with the G-d?’ He had noticed that, as per usual on the blog, I had used ‘G-d,’ and at the time I was responding to him, we just ended up having fun, although he did point out that we say ‘God’ in the Jesus Prayer and that trying to do something fancy with ‘G-d’ was a bit of a weird riff on the ‘horrible choice’ for English-speakers to appropriate the German ‘Gott’ for the divine. I could have responded that my spiritual father actually spells ‘G-d’ as ‘Gd,’ but I decided just to have fun and point out that the Jewish literary scholar Robert Alter uses ‘G-d’ in his translations. We ended up finishing the conversation on a fun note as I said: ‘Live a little! It’s Theophany!’

Now it’s a couple of hours after we had that conversation, and it just hit me that maybe I could have responded by reflecting on Bishop Paul’s extemporaneous homily. The whole point of doing all those readings in the Vesperal Divine Liturgy is to remind us as Christians that we have so much continuity with the Jewish tradition. It is, after all, the G-d whom we both worship who chases the dragons out of the water, in the presence of whom the waters turn back and flee.

And this again brings me back to reflection on the point about the politics of identity against which I wrote in the previous post before I had gone to Vigil. When I got home, suddenly the music that came pouring out of me was not the OCA tones that we had sung tonight, beautiful as it was and incredible as the kliros sung it. It was the Galician tone that I had learned at my home temple in Richmond last year: All creation is filled with rejoicing today, for Christ is baptized in the Jordan!

The music came out extemporaneously, automatically, before I even began to think about it. I realized that the folks at my home temple were having the Vesperal Divine Liturgy with the Great Blessing of the Water just at that moment. I messaged my evangelical friend who is at their temple right now (Chinese evangelicals enjoy being at our temple – he is not the only one there tonight, I hear) to see if they were singing it at that moment. ‘Not yet.’ Because he was not there last year, this tells me he was at rehearsal too. Amazing.

Perhaps my readers will not look very kindly upon my messaging my friend in the middle of service. But he tells me that my spiritual father is speaking at this very moment on the water of life coming into us as a kind of ‘spiritual transfusion.’ I think that correlates with what the OCA bishop here was saying. Sometimes the Holy Spirit can even work with Facebook messenger.

In fact, next week in my Asian American history class, I will also be lecturing on water because, as I told my class in lecture yesterday, Asian American history is really not about the politics of identity, but – if I may paraphrase the historian Gary Okihiro (whose textbook American History Unbound: Asians and Pacific Islanders we are using because it just explains stuff so well, while being contentious enough for me to disagree with it just enough to use it for teaching; it is no fun to teach with a textbook you totally agree with) – Asian American history is about the temporal relationship between people who have historically faced the oppression of being ‘orientalized’ (turned into objects called ‘Orientals’) and the stuff of the material, tangible world. Water is part of this stuff: you drink water, travel on water, eat stuff out of the water, circulate around land masses via water. In this sense, I am so glad that the Holy Spirit is preparing my lectures for me as well – in fact, last year, I was quite stressed out during Theophany because I had not finished preparing the next day’s lecture yet, but I felt the Lord say to me (in evangelical fashion, the Lord laid it upon my heart), Just teach! (more on that another time) – but I also just realized that having said this, I have probably picked a fight with not only the Orthodox but also a lot of people in my field too who are going to question my dedication to the liberation of peoples of color (I am la; don’t worry!), so I’d better stop here and go back to working on some peer-reviewed publications for Asian American studies journals where I can better explain myself.

The point is that this year’s Theophany is turning out very nicely indeed because it’s really messing with the last vestiges of my propensity to play the politics of identity in both my academic and ecclesial life. Just as I would hope that someone who has zero connection with Asian America might be able to get something out of my classes, I am finding my reflections this year to be making me think deeply about how artificial our schismatic walls are between Orthodox and Eastern Catholics, as well as when we do not adequately emphasize the Jewishness of Christianity in continuity with the Hebrew tradition. The water of life with the dragons chased out of it erodes our false consciousness indeed.

As the water at the OCA cathedral isn’t blessed yet – that’s tomorrow morning’s service – I’m going to get a cup of filtered water to celebrate. All creation is filled with rejoicing today, for Christ is baptized in the Jordan! 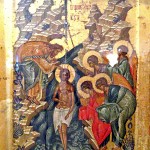 January 5, 2017
Theophany with the Orthodox in the cold
Next Post 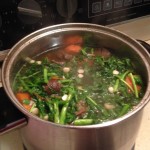 January 6, 2017 Some of my Cantonese friends seem superstitious about holy water, and I don't think that's anything to mock
Recent Comments
0 | Leave a Comment
"I can't believe you would consider the theological lightweight Kilby as a proper critique of ..."
antoniodec Fiat mihi secundum verbum tuum: on ..."
""Milbank criticizes Balthasar for being apolitical in his aesthetic reflections, and I can see how ..."
antoniodec Reading Sobrino on Óscar Romero and ..."
"the word is receptive, which has nothing passive about it but could be the most ..."
antoniodec Fiat mihi secundum verbum tuum: on ..."
"One can never "go home," not in this life."
billwald I’ve found my way home: on ..."
Browse Our Archives
Related posts from Eastern Catholic Person