Tonight I got to go to Immanuel Moleben. It was awesome.

For those who are unfamiliar, a moleben is a ‘supplication’ service, what the Greeks call a paraklesis, that is roughly adapted from Matins (the morning prayer service). Immanuel Moleben is something that we have for what we call St Philip’s Fast, the fasting period in the Byzantine Church between the Feast of St Philip (November 15, for us on the Newer Calendar) until Nativity. The moleben that we celebrate weekly is a service to Christ as Immanuel, centered around the icon of the Theotokos of the Sign – the sign from the Holy Prophet Isaiah that the virgin will conceive and bear a son and call his name Immanuel, which (as Holy Matthew the Evangelist confirms) means God-with-us. I suppose that’s Advent-y enough for our Western Christian readers, although this means that we’re not really into Advent wreaths and have a calendar that does not map well onto the dates of a very interesting Lutheran devotional whose name I understand myself to be strongly discouraged from reprinting on this blog.

Also, I am back in Richmond, British Columbia for the holidays. That means that I went to the Immanuel Moleben back at the very energetic temple where I was chrismated in the summer. I’ve been teaching at Northwestern University in Evanston just north of Chicago. This is why I have been slow to blog. It is not for want of material; it is for lack of time, which means the material has stacked up. Hopefully, I’ll get to catch up. Among other things, I still have to write about going to St Elias’ Brampton for the consecration of their temple by our church’s Patriarch.

Indeed, as my Northwestern faculty mentor says, when it rains, it pours. I’ve blogged on Taiwan today – or rather, I wrote an excuse of a blogpost in the interest of rambling, although I stand by everything that I wrote and hope to refine it further – all my posts are a bit of a work in progress – this is why they are ‘web-log’ – a ‘log on the web,’ so that, as my Patheos colleague Mark Shea says, ‘no thought of mine shall ever go unpublished again.’ Now it’s late and you get another one. I am on a roll, and hopefully to the dismay of my critics, this is more fun than I remember.

Immanuel Moleben reminded me of why I became Eastern Catholic.

My spiritual father says that he likes Byzantine services precisely because they tend to be inefficient. With inefficiency, the services take longer, which means that there’s more singing and chanting that goes with it. And with more singing and chanting, the body eventually clues into the fact that it is praying, and sooner or later, your whole being is absorbed into the prayer.

This happened to me around the time that the icon of the Theotokos of the Sign was brought out from the Royal Doors and put onto the tetrapod, which is earlier in the service than it usually happens to me (I am, as the Protestant hymn says, ‘prone to wander’). This is possibly because I keep the image of Our Lady of Ferguson and All Those Killed By Gun Violence in my office at Northwestern. As a #BlackLivesMatter adaptation of the Theotokos of the Sign, the Ferguson icon changes the son that the mother bears into the ‘Hands Up, Don’t Shoot’ position as he is caught in cross-hairs and focuses on the son’s ‘sacred heart’ (which the Episcopal iconographer possibly didn’t know was a Latin thing). There was also something floating around Byzantine circles, especially the ones that really despised the image, about how the mother in the picture is some sort of voodoo adaptation; I cannot for the life of me find anything about this in my rush to blog, so I will have to count on my astute readers who are likely mortified that this image hangs in my office to tell me all about it and why this icon is uncanonical and why I shouldn’t be venerating it and all the things. I don’t venerate it, for the record, but as my spiritual father tells me, it is certainly an image that I can look at to get some inspiration and think about the world more deeply.

But bringing out the real Theotokos of the Sign added yet another dimension to my meditation. As the icon was being brought out, and then laid on the tetrapod, and then the tetrapod was incensed from all four sides, we kept chanting:

We extol You,
O Christ the Giver of Life,
For by fulfilling the sign foretold of Immanuel,
You revealed Yourself the Saviour by the prophets foretold.

Christ is among us! we Byzantines often say. He is and will be! the reply goes. If Christ is among us and his kingdom is blessed both now and ever and for ages of ages, then of course I am not crazy to have experienced the Byzantine Church’s worship as a social justice tradition, a tradition that insists that – as we pray before meals – the poor shall eat and be satisfied; those who seek the Lord shall praise Him; and their hearts will live forever.

Over the next few days, our temple in Richmond will be participating in several protests against racism here. Even though this temple is in Canada, white supremacist flyers have been circulating around Richmond in the wake of the election of Donald Trump and the emergence of the ‘alt-right’ into the political establishment. We will be joining in an ecumenical protest on Friday led mostly by Protestant clergy and a secular one on Sunday organized by non-religious antiracist activists, and we’ll be hosting a Moleben for Civil Strife next Thursday, inviting people who may or may not be familiar with Byzantine worship to the event we are advertising as a Prayer Service in the Face of Racism. It would be much too tedious to explain here how tricky it is to talk about race in Vancouver as opposed to Chicago (where I now work). That explanation will have to wait for future posts – and hopefully soon, as I do hope to bring an Eastern Catholic sensibility to bear on the question of race.

For some who may be wondering, all of this is in keeping with our temple’s tradition of praying in solidarity with the oppressed for social justice: last Sunday, the temple held a Vespers for the Preservation of Creation in solidarity with protesters at Standing Rock; in July, we sang an Akathist to Jesus Christ Light to Those in Darkness for all victims of state violence, but especially in solidarity with the Black Lives Matter movement in remembrance of Philando Castile (we even said a panakhyda – a memorial service – for him, and all victims of police violence); we were also involved in solidarity with Hong Kong’s pro-democracy Umbrella Movement in 2014, and we reflected on that in light of the Revolution of Dignity that had occurred in Ukraine prior to that. Christ is among us!

No doubt, I’ll be writing about each of the protests we’ll be attending over the coming week, but I think this is an opportunity for me to expand on what I blogged about a few months earlier when I attempted to blog about the icons in my office in Asian American studies. I said then – and I repeated a few hours ago – that I came into Eastern Catholicism understanding it to be a social justice tradition. Certainly, I hope I’ve grown since my initial impressions, and I’ve seen many more parts of the Eastern Catholic churches, including my own Greek Catholic Church of Kyiv, to get a sense that this view is not exactly shared by many in our church, not to mention outside our church. A close friend of mine remarked to me a few weeks ago that perhaps I have even been disingenuous by not writing publicly about this core dimension of my faith, though another friend recently said that it is patently obvious by the references I make on my blog that I broadly align with the ‘Left,’ fragmented as the ‘Left’ is (as ChangeLab’s Scot Nakagawa so poignantly and painfully points out).

This means that I have some writing to do, and perhaps it will make some people unhappy that I am on a roll mixing spirituality and politics on perhaps what they consider to be the wrong side of their ideological boundaries. I have in the past complained about critics, but hopefully, this will bring in the trolls, especially the ones who will accuse us of being paid by John Podesta (our answer would be: then why does our temple still struggle to pay the utilities every month?). Save, O Lord, and have mercy on those who hate and wrong me and make temptation for me, and let them not perish because of me, a sinner! (Jordanville Prayerbook, Morning Prayers). 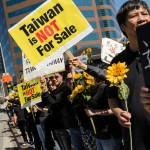 December 7, 2016
Maybe doubt sown by the Trumping of Taiwan can be productive for Catholics
Next Post

December 8, 2016 What's So Good About Being Eastern Catholic?
Recent Comments
2 Comments | Leave a Comment
"I can't believe you would consider the theological lightweight Kilby as a proper critique of ..."
antoniodec Fiat mihi secundum verbum tuum: on ..."
""Milbank criticizes Balthasar for being apolitical in his aesthetic reflections, and I can see how ..."
antoniodec Reading Sobrino on Óscar Romero and ..."
"the word is receptive, which has nothing passive about it but could be the most ..."
antoniodec Fiat mihi secundum verbum tuum: on ..."
"One can never "go home," not in this life."
billwald I’ve found my way home: on ..."
Browse Our Archives
Related posts from Eastern Catholic Person