The Blog in the Economia of Academic Writing

Yesterday, I had an illuminating conversation with a senior colleague who showed me something about teaching about which I had not thought to articulate. She said that if I were to think about it, there are really three genres of teaching: the large lecture (200 people), the small lecture (30-40), and the seminar (5-15). The advice she gave me was to master all three as genres unto themselves; it is fine to be creative in the classroom, she suggested, but they are really three different genres and each is a craft in its own terms.

I have been thinking about this conversation as I think about the series that I’m writing about why I blog. The joke that has circulated through The Chronicle of Higher Education is that there are three rules of academic blogging: 1) pick the right platform, 2) write whatever you want, and 3) write for the sake of writing. It’s funny in a facetious way, but sometimes I worry that doing it too well will make me return what I called my ‘private mode’ of blogging; I’d much more have a Thing in the Anglo-Saxon sense – a real, ponderous discussion among real people – through the blog.

But if I were to extend my colleague’s reflections on the modes of academic teaching to what I might make sense of in Byzantine terms as the economia of academic writing – the literal ‘house rules’ of crafting academic work in scholarly prose – it seems to me that the blog is a genre of writing that needs to be seen in its own right as an academic writing genre. What this means is that the truth is that any writing that I do is automatically lumped in with the house that is my church (the Greek-Catholic Church of Kyiv in full communion with the Latin Church and in the hope of the fullness of ecumenism) as well as the house that is my guild (the academy, by which I do not only mean the institution where I work, but the fields across academic institutions that I engage: geography, religious studies, Asian American studies, and maybe theology).

To speak of the house that is academia, then, my claim that there is an economia of academic writing suggests that there is no such thing as one single genre of academic writing, which I suppose is funny because academic writing always gets made fun of for being so bad. There used to be a hilarious Academic Sentence Generator from the University of Chicago that did just that; unfortunately, it doesn’t seem to be there anymore, which is sad, because it really was funny.

I have found it increasingly unhelpful as what you might call a baby academic to think about academic writing as one singular genre, though. It seems like there is a whole repertoire of genres I need to master, and once I’ve mastered one, I’m constantly humbled in the face of having to master another. There are, for example, peer-reviewed journal articles, articles in experimental venues, book reviews, encyclopedia entries, book chapters, grant applications, conference presentations, scripted lectures, teaching statements, research statements, diversity statements, cover letters, and even the academic email. I’d say that even grading and the comments that we give are a genre unto itself, as are syllabi and the assignment prompts we issue. The life of the mind is no picnic; there are house rules stretching across this entire repertoire, and if I want to live in this house, I have to master them all, and more. It’s a lot of work, and this is just the writing part – we haven’t yet talked about service, community engagement, and reading widely to keep up with the fields into which our work speaks.

The blog is part of this working house. This is why I keep calling my blog a ‘log on the web’ – it’s literally how my adolescent friends and I used to treat that defunct part of the internet called Xanga. What we used to do was to log our own thoughts on the web, and other people would comment. It would be a little bit personal, but the trick was not to turn it into therapy (which it more often than not did). It could get a little heady, but the trick was not to turn it into one of those nonsensical Catcher in the Rye ‘phonies’ that passes for adolescent poetry (which also often happened). The academic blog is taking that balance of the personal and the intellectual into the house of the academy, where it is also a genre in our repertoire to be mastered, which is to say that like Xanga, we often fall into the very traps into which we should not be falling.

This means, of course, that I am still working on execution, and I think this is one of the most interesting things about blogging: unlike other academic writing genres, blogging is the one of the only ones where I can get published with the most half-baked of ideas. Readers of blogs looking for finished, polished articles (which is what my posts have sometimes been called) will inevitably be doomed to disappointment. The blog is not about polish and finish. It’s about process, to work one’s thoughts out in public and see them in public process, typos and run-ons and all.

And therein lies the risk of blogging. The public in which we blog is not always a rational one. I’ve made fun of Catholic and Orthodox Internet, and Evangelical Internet is no better, no worse, but perhaps a bit more therapeutic, though Catholic Internet can get pretty manipulatively therapeutic too, now that I think about it. But as much fun as I may make of these arenas, trolls are real, and because of this, some of my colleagues advice me to stay out of the comments, if only for my own sanity. I am blessed to say that I do not actually have that many trolls yet, although the occasional person will stop by to call me a ‘uniate,’ but the collective experience of my colleagues suggests that they are coming for me en masse someday too when I finally say something worth really trolling.

But one of my blogging colleagues had some very interesting advice about trolls. He said that trolls would be good for me, that I should be exposed to the trolls and willing to write stuff on my blog that will even invite the trolls, because if there is anything that will take me out of an echo chamber in the house of academia, it’s trolls. Unlike the passive aggression that often roams the halls of the ivory tower, the open aggression of trolls can be used, he suggested, as a renewal to a commitment toward spirited argumentation and ‘intellectual chastity.’ You can’t argue with a troll, you can’t reason with a troll, but pretending that trolls don’t exist is to shut myself up in the house and forget that not all is well in the public sphere. Trolls are not supposed to paralyze us; trolls remind us that what we are doing are the good works that G-d has prepared for us to do – to be, in the words of my Holy Cross high school’s motto, in tenebris lux, light in darkness.

In such a way, academic blogging is a form of affirmative obedience to what Benedict XVI said in his 2009 speech on the ‘new social communications’ – and here, I suppose is where the two houses of church and academy out of which I write converge –

The new technologies have also opened the way for dialogue between people from different countries, cultures and religions. The new digital arena, the so-called cyberspace, allows them to encounter and to know each other’s traditions and values. Such encounters, if they are to be fruitful, require honest and appropriate forms of expression together with attentive and respectful listening. The dialogue must be rooted in a genuine and mutual searching for truth if it is to realize its potential to promote growth in understanding and tolerance. Life is not just a succession of events or experiences: it is a search for the true, the good and the beautiful. It is to this end that we make our choices; it is for this that we exercise our freedom; it is in this – in truth, in goodness, and in beauty – that we find happiness and joy. We must not allow ourselves to be deceived by those who see us merely as consumers in a market of undifferentiated possibilities, where choice itself becomes the good, novelty usurps beauty, and subjective experience displaces truth.

In such a way, academic blogging – I suppose even the kind that I do where sometimes I wax quite informal – is a genre with our scholarly house rules that is more important than some make it out to be. Opening myself up even to the possibility of being trolled, blogging highlights the risk that a real philosophical dialogue undertakes, especially in a world that reeks of the common sense of the market where argumentation is seen as a liability to the quick sale, the instant profits, and the temptation to self-commodification. Blogging is part of our economia because it is part of us opening up the doors of our house to such risk. Maybe as I keep working at this craft, someday I’ll be better at it. 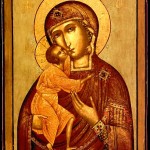