Why I Blog (Part 5): joining the public blogosophere as Chinglican and Religion Ethnicity Wired

This is the fifth post in a series on why I blog with no authority. Previous posts include the first post explaining why I needed to write this series, a second post on how I started out blogging without any concept of what the public sphere was, a third post about being my alter-ego called Chinglican, and a fourth post about reflecting on Catholic social teaching with the democracy movement before the Umbrella Movement was ever in the works.

About a year into writing more frequently and perhaps even more politically, I think I finally started beginning to understand some of the basics behind public intellectual work on the blogosphere and around the podcasting world. I began to understand, for example, that sermons were not the only things that Christians listen to and read.

In fact, it was in Hong Kong that I finally broke the Protestant habit of listening to sermons online; before that, I had religiously listened to Word on Fire homilies because it was a nice rebellious thing for an Anglican to listen to a Catholic homilist and to Duke University Chapel’s weekly sermons. While in Hong Kong, the rector for Duke Chapel at the time, the Rev. Sam Wells, preached his last sermons there before moving back to the United Kingdom, and it so happened that I stopped listening around then, though not before I heard one of the best sermons I have ever heard in my whole life, preached on the Holy Apostle Thomas by the Rev Candace Ryals Provey, who now is the assistant university chaplain at Yale.

Instead of sermons, I began listening to podcasts and reading blogs that weren’t sermons, and my favourite podcast was the one that Tavis Smiley and Cornel West did on Public Radio International. Because of this, I began understanding public engagement as a conversation where one could be as ‘prophetic’ as Smiley and West.

After re-activating Religion Ethnicity Wired because I wanted to write about religious news apart from my work as Chinglican, one of my proudest moments was outing myself as the guy behind Religion Ethnicity Wired when I wrote a post on the sexual abuse scandal in the New Calvinist charismatic network Sovereign Grace Ministries. Finally, at least on one of my blogs, I was writing under my own name, and this time, I was not going to delete any posts, although I was still a bit chicken, so I closed the comments too.

Around this time, Chinglican’s writing became explicitly Anglo-Catholic turn for two reasons. First, a new church plant calling itself ‘Anglican’ (it eventually joined the Anglican Network in Canada) started advertising all over Facebook, and in my annoyance, I wrote an epic piece challenging its usage of Anglicanism as an evangelistic strategy in Vancouver. My co-blogger ‘Churl’ also let out a very public scream against the evangelical church for not being there for his mental illness, announced that he was heading toward the Catholic Church, and accused the lot of us who were bent on staying Protestant for our complicity in the oppressive force of Protestantism; for what it’s worth, this was the first ever open letter to any evangelical church I have ever read. In response, I not only wrote a piece on Mary for Protestants, but I penned a series titled ‘What’s So Good About Being Anglican?’ in which I compared the Anglican Communion’s madness to Anne Hathaway’s career. I heard that these posts started getting widely shared, especially among students at Vancouver’s Regent College, and most especially the ones that were heading toward Rome.

By autumn 2013, both Chinglican and I (the latter on Religion Ethnicity Wired) had developed a rather modest readership. By this point, Chinglican had also been writing about Asian American Christian solidarity with Black Lives Matter ever since the murder of Trayvon Martin at the hands of George Zimmerman (to keep the record straight, it was in fact Zimmerman’s acquittal that led to the beginning of the Black Lives Matter movement); part of that, as I later revealed when the protests in Ferguson happened the next year, was that my father had been ordained in the black church. I also gave an informal Asian American history class of sorts to my friend Grace Hsiao Hanford, which she published on her site AsianAmericanChristian.org as ‘AA 101.’ Because of this, Chinglican also developed a sort of ‘people of color’ race angle in addition to the Anglo-Catholic schtick.

And then came Rick Warren… 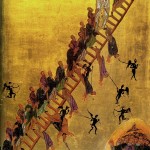 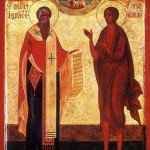 March 30, 2017 Great Canon Reflections, Part 1: on being tricked into doing proper prostrations at the Great Canon of St Andrew of Crete
Recent Comments
0 | Leave a Comment
Browse Our Archives
get the latest from
Eastern Catholic Person
Sign up for our newsletter
POPULAR AT PATHEOS Catholic
1

Catholic
A child in Kassiani's garden: for Great and...
Eastern Catholic Person
TRENDING AT PATHEOS Catholic