Some not-very-profound musings on my chrismation anniversary

It is my chrismation anniversary today. I was chrismated on the Vigil of Ss Peter and Paul.

To be honest, I have been searching for something profound to say about the significance of me being chrismated on the Vigil of Ss Peter and Paul, such as, oh, I came into communion with the church that (in Afanasieff’s words) ‘presides in charity over the other churches.’ I may even have had a thought or two about that when I was chrismated, as I was re-reading Henry Karlson’s post on Ss Peter and Paul on Vox Nova and then reading his more recent post on their shared martyrdom of love.

But the truth is that there is no significance to the date for me. The fact is that my spiritual father and I felt that I wasn’t ready to be chrismated at Pascha for a few personal reasons. This led to a delay to Pentecost, which also didn’t happen. By the time I was ready, the next feast was the Feast of Ss Peter and Paul, which my spiritual father thought was a good way to close out the Apostles’ Fast.

So that is what we did. Invitations went out, mostly to a bunch of Latins, evangelical Protestants, and Pentecostals. On the evening of the chrismation, five times the number of people who usually come to our temple showed up. Most were very lost for most of the liturgy. We did not celebrate Vigil either (that would have been a liturgical disaster). We went straight from the Rite of Reception and the Office of Chrismation into a Divine Liturgy. Celebration followed in the parish hall.

It follows that I have nothing profound to say about the significance of what it meant for me to be chrismated on the Vigil of Ss Peter and Paul. What I remember was that I was very hungry when it happened, but this was not because of the Apostles’ Fast. It was rather because my spiritual father suggested that I abstain from food all day to have a spiritual experience for the chrismation, and I followed his instruction.

And yet, I remember looking down at the icon of Ss Peter and Paul with the church in their hands after venerating it. My spiritual father had just led me into the sanctuary on his epitrakhil following my confession of faith in the narthex; it was moving because my biological father, an Anglican priest, read Psalm 66 in Cantonese as I was coming in. I had made a prostration before the tetrapod where the icon was, and a Polish Dominican priest then read over me the verses preceding the chrismation – the same words quoted by the Holy Pope John Paul II in Warsaw: Send forth your Spirit, and they are created, and you renew the face of the earth.

My friend who was near the front, a Chinese Canadian evangelical, said that the look on my face was that of perfect peace, like I had come home. Another friend, a Mennonite Brethren minister who is also Chinese, said that he was sobbing in the back; he said that he felt like I had finally been set free, presumably of the politics of the Chinese Protestantism in which he was still engaged.

But to me, this quibbling over who got a hold of me – Rome or Kyiv, or both – feels too much like a form of ecclesial identity politics. The fact is, as Henry Karlson writes, I had come home to love – to a love unto death.

There was a lot of love on the night of my chrismation. My student Eugenia Geisel took the train up from Seattle and represented our lay Latin friends at the chrismation. Friends from the local Latin Church came too, as well as my Protestant friends, some of whom were charismatic and others of whom were not. I am not sure why they all came to see me join a church that wasn’t theirs, but they did, and we ate and drank to it afterward.

I think I am supposed to write about the martyrdom of the Holy Apostles Peter and Paul, but I don’t feel like I’m deep enough to do that yet. But in speaking of love, there is a story that I have never told before. One of my friends in the Latin Church wasn’t able to make it to the service. He had also expressed disapproval that I was entering communion with Rome in what he thought was such a bizarre way. But that night, he messaged me to say that something weird happened while he was with his family in a baseball park munching away at a hot dog. He said that he simply thought of me, and something had changed, as if fire had poured down, and in that moment, he knew that we despite the different churches we were part of had come into communion. 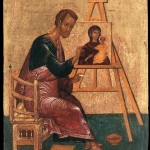 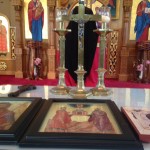 June 29, 2017 'It's how love works, man'
Recent Comments
0 | Leave a Comment
"I can't believe you would consider the theological lightweight Kilby as a proper critique of ..."
antoniodec Fiat mihi secundum verbum tuum: on ..."
""Milbank criticizes Balthasar for being apolitical in his aesthetic reflections, and I can see how ..."
antoniodec Reading Sobrino on Óscar Romero and ..."
"the word is receptive, which has nothing passive about it but could be the most ..."
antoniodec Fiat mihi secundum verbum tuum: on ..."
"One can never "go home," not in this life."
billwald I’ve found my way home: on ..."
Browse Our Archives
Related posts from Eastern Catholic Person