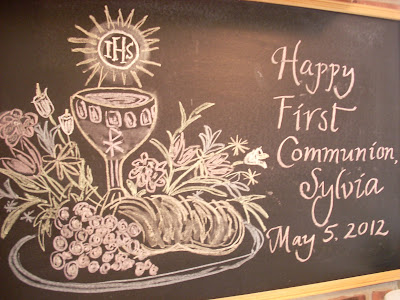 I attended my first post-reversion First Communion last Saturday. My friends’ daughter Sylvia wrote and shared with me a terrific journal entry at the end of the day. Favorite observation: “The Wine was much better than I thought it would be,” which if you think about it is probably what the guests at that wedding in Cana wrote in their journals afterward, too. Inspired by Sylvia, my reflections on the event.

In preparation, I asked Sylvia’s big sister Clare for First Communion gift advice. “She already has most of the holy stuff,” Clare mused. “But remember when I got a little makeup kit for my First Communion two years ago and Sylvia was really, really envious?” (I did remember. Sylvia’s envy, and Clare’s choice not to share the beauty booty on that one night, prompted a wonderful moment of maternal catechesis when my friend Ann Marie cradled a sobbing Sylvia and talked about free will and rewards in heaven. Apparently Clare learned a lesson that night, too, and not only shared the next day but prompted me to make sure that Sylvia didn’t need to wait for heaven for the rewards of bubble-gum lip gloss.) So I filled a little tin locking trunk with innocuous kid makeup, including something called hair mascara–brush-on glitter paint–that initially caused Ann Marie, not seeing the “hair” part, to wonder what the heck I was thinking. And then, feeling the need for a bit of “holy stuff” anyway, I paid a visit to Dayton Church Goods, a three-story (not including the basement warren known as The Catacombs) Aladdin’s bazaar of Catholic holy stuff in which I have been known to lose all track of time, grazing happily amid the holy cards and medals and statues and could-I-really-afford-one-these-for-home thuribles. Until a few weeks ago, Dayton Church Supply had the distinction of being located next door to a now-defunct purveyor of “adult” merchandise, the profane and the sacred nestled cheek-by-chaplet, as it were. (It was that juxtaposition–captured in a national news photograph accompanying a story on the Dayton Peace Accords–that convinced me this was a place I could call home.) I navigated the Saturday-morning-of-First-Communion-weekend crowds and scored a rosary bracelet and First Communion wrapping paper replete with traditional Eucharistic imagery. I got my own reward slightly short of heaven later that night, when after she opened her gifts Sylvia–in shorts and t-shirt but still with her updo and pearl tiara–rushed outside to the deck where I was sitting and shrieked, “I DIDN’T EVEN KNOW THEY MADE SCENTED FAKE NAILS!” I’m sure I missed a teachable catechetical moment by not pointing out that the rosary bracelet was probably the better reason for joy, but she’s 8. Also in preparation, and at Sylvia’s mom’s invitation, I drew a Happy First Communion message on Sylvia’s family’s kitchen chalkboard. This prompted a request from Sylvia’s brother Leo, who will be confirmed next year, that I start now working on a suitably soldier-of-Christ-ish laser missile smackdown-of-evil illustration for his Confirmation chalkboard. I’m on it.

The First Communion, but not the last 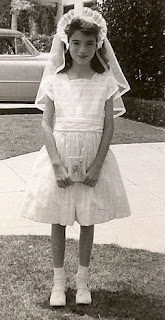 During the Mass I couldn’t help but slide back and forth through time, remembering my own First Communion. So many differences–our very modern, light-filled, and beautiful church instead of my very traditional, dark, but beautiful childhood parish; the children’s choir singing different hymns; the communicants sitting with their families and receiving Communion accompanied by their parents, instead of being roped off in a special section under watchful nunny eyes; receiving in the hand and from the Chalice, of course, which we were not permitted to do in the 1950s; the children dressing the altar, solemnly choreographed (with subtle wrinkle-smoothing followup by the deacon), and bringing up the gifts. But there were similarities, too: the girls in their white dresses and veils, the boys in suits and ties (our pastor laughingly noted that the specialness of the day in our distinctly casual-dress parish could be seen not only in the fact that the children were dressed up, but even more tellingly in that their parents were), the deep sense of a shared tradition that brought family members back to church in a way not even Christmas and Easter can do, the reminder of the enormous Gift that is Christ’s presence with us, in us, not just once in a lifetime but every day if we choose to make him welcome.

Come to me, all of you

The celebration of Sylvia’s First Communion also brought up for me conflicts old and new about access to the Eucharist. At heart I’m with the East in administering all three sacraments of initiation at once to infants, and catechizing by mystagogia in the lifetime that follows. My own son’s “first Communion” took place when he was 5, and we were part of a small house church of several families and a priest friend. My son was the youngest child present, the only one who hadn’t made his First Communion. After months of hearing the priest speak, in the Eucharistic prayer, about Jesus being at supper with his friends on the night before he died and saying to them, “Take this, and eat,” he burst into tears one night just before the Great Amen. “Am I not his friend?” he wailed. “I love Jesus, too! I want to do what he asked his friends to do.” Our priest friend said he thought that was as good an understanding of the Eucharist as most adults manage, and so admitted my son to Communion then and there. (Irregular! Irregular! I’ll save the comboxers the time. It was all irregular, but it was the 1970s; everybody’s back in the box now.) In later years, when I was an Episcopalian, a friend’s daughter–who had been receiving communion since she was old enough to toddle to the communion rail, as is common in the Episcopal Church–was a first grader in a Catholic school and, at weekly Mass, was prevented from going forward to receive because she hadn’t yet made her First Communion. “It’s OK,” Hannah told her teacher, “I’m not Catholic, I don’t have to wait.” When informed that in that case she’d be unable ever to receive in a Catholic church, Hannah put her hands on her hips and bellowed in her biggest outdoor voice (daughter of an actress and an opera singer, it’s a very big one): “Well what would Martin Luther King think of that? That’s discrimination! What about Rosa Parks?” She was hustled out of church just short of organizing a protest march of first graders. (Yeah, I know, there’s no right to receive. And Episcopal communion isn’t Communion communion, to Catholics. But ya gotta love the spunk.) At Sylvia’s First Communion Mass, I went forward to receive from an EMHC right behind the crocodile of my friends’ Brian and Donna’s 6 kids ranging in age from 8 to babe-in-arms. When the minister reached out to give a blessing to the little kids, I wondered half seriously–given the recent combox brouhaha–whether I should snatch them away and lecture the minister on liturgical protocol, but it didn’t seem to be such a hideous abuse so I kept quiet. They took their blessings with resignation, but when she tried to bless 8-year-old Blase, who had made his First Communion just a week before, he whispered, “No, I get Communion!” I backed him up, so I got to be present for a Second Communion, too.

We who mystically represent the cherubim 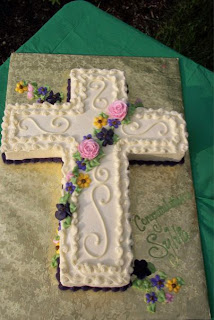 First Communion parties get a lot of flack for seeming to jumble the sacred and the secular: the cross-shaped cake, the presents, the groaning tables of food, the adults popping corks or tapping kegs. But you know what? A First Communion party can be as close as we get to the perpetual party in heaven that the Eucharist here on earth embodies. It was for me on Saturday, anyway. There was Ann Marie and Michael’s bountiful hospitality, which makes family out of everyone. There was music–standards and even newly composed works played by a high-school piano prodigy on Michael’s late father’s piano. There was food, and more food, and wine, and more wine. There was the exuberance of being part of a celebration composed largely of young Catholic couples with big families, so kids outnumbered adults, and threaded their sticky, muddy, basketball-dribbling, supersoaker-shooting joy through the night like the Gospel of Life come to life. “There’s a pink girl following me!” one toddler girl whispered to her mom, but it was just another toddler girl in a pink dress, bent on hugging. There was the kick of being part of a theological conversation with Matthew Levering–and one of his students, Jason, with whom I’ve been Facebook friends since our mutual friend The Hermit introduced us online, but whom I hadn’t met in person until that night when Michael, who knew Jason the same way, invited him and his wife and their kids to be family (is this not the coolest exercise of radical hospitality and example of the Internet as communion of saints?)–that ranged from The Avengers (under both kinds–comic book and John Steed/Emma Peel) to Batman to Fawlty Towers to whether it’s grave matter to swear at drivers making you late for a First Communion Mass (is it less grave because they can’t hear you [er, me], or more grave because you are saying those bad things over and over? “Stop it,” Matthew said, “that way lies scrupulosity”) to Whit Stillman and Woody Allen, with a pitstop in Dante’s Inferno. And there was that moon, over it all. As the Orthodox hymn says:

We who mystically represent the cherubim
And chant the thrice-holy hymn to the Life-giving Trinity,
Let us set aside the cares of life
That we may receive the King of all,
Who comes invisibly escorted by divine hosts.

My journal entry is a lot longer than Sylvia’s, but it really comes down to these few takeaways: How blessed we are to be his friends, and one another’s. How good it is to approach his family table, from however long a distance, however improbably. How full of surprises he is, this God of ours–hunting us down like a pink girl who just wants a hug, enticing us with scented fake nails, feeding us with the Bread of Life and the Wine that is always, always better than anything we expected. Holy Communion, Batman!

Images are the author’s own.

May 8, 2012 Where the Wild Things Are Reunited
Recent Comments
0 | Leave a Comment
Browse Our Archives
get the latest from
Catholic
Sign up for our newsletter
POPULAR AT PATHEOS Catholic
1

How White Men Lost the Meaning...
suspended in her jar
Related posts from Egregious Twaddle