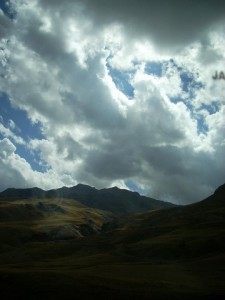 An hour in the Pyrenees, and you suddenly understand the deep ties between geography and belief. And you get a clue about why we’re always fighting over territory. Gerald O’Hara was partly right: “It’s land, Katie Scarlett! . . . Why, land is the only thing in the world worth workin’ for, worth fightin’ for, worth dyin’ for, because it’s the only thing that lasts.” Of course it doesn’t, really. But since Eden was foreclosed on, that’s the story we tell ourselves.

Pilgrimage 2012, Day 8: Zaragoza to Lourdes, through the Pyrenees 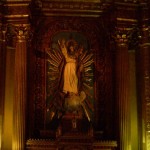 Leaving Zaragoza (the name of the city, by the way, is a corruption of Caesaraugusta, its title as a Roman camp), we pause to celebrate Mass in the parish church of Santiago el Mayor—St James the Greater again. With its coffered ceiling and gilded baroque statuary, this is a far cry from our home parishes, though it seems to be the standard here in Spain. At the back of the church are leaflets promoting the Year of Faith and sign-up sheets for volunteer catechists. Over the altar towers the saint himself.
No one has mentioned during this trip—perhaps out of cultural sensitivity, perhaps assuming we knew—that St James the evangelizer and pilgrim bears another, more bloodthirsty identity in Spain. He is also Santiago Matamoros (St James the Moor-Killer), after the legend that he appeared, mounted on a white horse, at the side of Christian king Ramiro I and helped to beat back the Moorish armies in the Battle of Clavijo in 844. Cervantes has Don Quixote pay homage to the legend, and the battle cry of Spanish armies ever since has been Santiago y cierra Espana (“St James! and strike for Spain”).

Zaragoza, and the Spanish and French Pyrenees beyond, have been contested lands over and over. The Old French epic Chanson de Roland (the Song of Roland) sings of another battle between the Christians and the Moors, on the north side of the Pyrenees at Roncesvalles. There the brave Roland, a knight in Charlemagne’s army, single-handedly fights off a treacherous attack by the Muslim Saracens—the poem calls them, inaccurately, pagans—and dies on a peak, literally blowing his brains out, sounding his elephant tusk horn to warn the Christians. He has just time for a last confession, and so his soul is carried to heaven by angels—while the Saracens are driven back to Zaragoza by Charlemagne and drowned in the Ebro.

But Rollant feels he’s no more time to seek;
Looking to Spain, he lies on a sharp peak,
And with one hand upon his breast he beats:
“Mea Culpa! God, by Thy Virtues clean
Me from my sins, the mortal and the mean,
Which from the hour that I was born have been
Until this day, when life is ended here!”
Holds out his glove towards God, as he speaks
Angels descend from heaven on that scene.
~ La Chanson de Roland, CLXXV

As we drove through these ancient, brooding mountains, their sheer slopes and time-softened peaks crisscrossed with light and cloud shadow, it was easy to see how this landscape could breed legends. It’s as stark and awe-inspiring as Sinai, and the people of the region seem to have inherited the same fierce territorial loyalty and faith-sliding-sometimes-into-madness that haunts the Holy Land. This was Cathar country, too—the home of the medieval Christian heretics known to themselves as Les Bons Hommes (the Good People) and to others, for the gnostic rigor of their fasting and abstinence from the world, the Pure Ones (Cathari, in Greek). The Cathars flourished in province of Toulouse, now in southern France, around the walled town of Albi (thus another name for them, Albigensians). They were people of the Languedoc, the Aquitane, the “people who talk like us,” the ones who said Oc instead of Oui for Yes. Their autonomy, their wealth, the power they accorded women, their refusal to acknowledge the authority of Rome or France, their past connections with the Moors of Al-Andalus and the shady Knights Templar all made the Cathars easy targets for Church-State reprisals. When the efforts of the newly formed Dominican Order and the Inquisition failed to contain the spread of the Good People’s influence, the pope and the king of France declared the only crusade of Christian against Christian.

In 45 years of bloody European-on-European battle—“How can we tell the heretics from the true Christians?” one puzzled soldier asked; “Kill them all, and let God sort them out” was his commander’s reply—the Cathars were eventually eradicated. Their last stand was at a walled fortress high in the French Pyrenees called Montsegur. On the final day of the siege, the grand dame of the remaining heretics, the 70-year-old Lady Esclarmonde du Foix, led 220 inhabitants of the fortress into the fires of martyrdom, singing. (Disclaimer: I do love me some Cathars. Yeah, they were heretics, but they were intense.) Bonus points: France got control of Toulouse, the Church got its churches back .

Today it’s the Basques—or, as they refer to themselves in their unique language, the Euskaldunak, or “people who talk like us”—who fiercely battle for the autonomy of their territories in the Spanish and French Pyrenees. Basque separatist organizations, including the ETA (whose violent protests, bombings, and kidnappings have taken nearly 900 lives over the years and have earned the group the label of terrorists) fight as hard for land as Gerald O’Hara’s Irish descendants have in Belfast and Derry.

All you have to do is look at these peaks (even in the foreshortened and pathetic views I caught out our bus window) and something stirs. You know why one of God’s ancient Hebrew names is El Shaddai (God Almighty, awesome God, but literally “God of the mountains”) and why the psalmist sang:

I love you, LORD, my strength,
LORD my rock, my fortress, my deliverer,
My God, my rock of refuge,
my shield, my saving horn, my stronghold.
~ Psalm 18:2-3 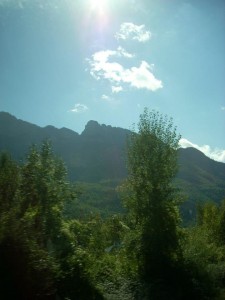 We sang, too, as we took a break atop the pass from Spain into France. Our rest stop (a bar and grill serving hikers in the summer and skiers in the winter) resembled an Alpine chalet, so it was only natural that as we waited for the staff to whip up paella for the masses on short notice, and the Archbishop himself acted as sommelier, the pilgrims chorused “Edelweiss” and “Doe, a Deer”—hits from that musical (known in Spanish, we discovered in Madrid where it is enjoying a stage revival, as Sonrisas y Lagrimas, “Smiles and Tears”) in which the heights truly act as deliverers. We didn’t attempt “Climb Ev’ry Mountain,” but it was background music in all our hearts as we descended a bit to the little village where a shepherdess saw a Lady in a rocky grotto just like the ones we were passing. When that Lady spoke, it’s worth noting, she spoke not French but Occitan, the ancient language of the region—Bernadette’s language. “Soi era immaculado councepciou,” she said. Oc, indeed!

October 2, 2012
Bilocation, Chocolate, and the Patron Saint of Pilgrims: Egregious Twaddle on Pilgrimage
Next Post 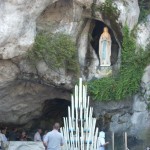 October 5, 2012 The Village of St Bernadette: Egregious Twaddle on Pilgrimage
Recent Comments
0 | Leave a Comment
Browse Our Archives
get the latest from
Catholic
Sign up for our newsletter
POPULAR AT PATHEOS Catholic
1