Our Life, Our Sweetness and Our Hope: Egregious Twaddle on Pilgrimage

Our Life, Our Sweetness and Our Hope: Egregious Twaddle on Pilgrimage October 9, 2012 Joanne McPortland 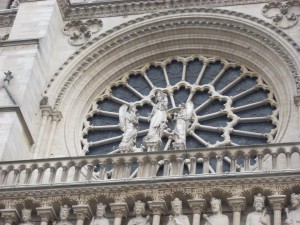 Everybody else in Paris was lined up to see Lady Gaga. But we were gaga for another Lady. 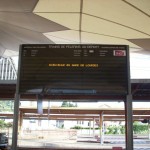 We left Lourdes early on a Sunday morning, bidding our bus drivers farewell and gathering at the Gare de Lourdes to catch the high-speed train to Paris. We were clustered in little groups throughout several train cars—our guides Guida and Francoise later confessed to putting some time into choosing who would be compatible with whom on the 5-hour journey—and had to master standing on the correct platform numbers, which didn’t correspond to our assigned car numbers because, as Guida tried to explain while herding the cats we are, “the train is back-to-front!”

After stowing our hand luggage and checking out the locations of bathrooms (“Use these,” Guida insisted, “because even though they are small and the washbasins overflow, there will be nothing this good in Paris”) and bar/snack car, we settled in. The first third of the journey, which traverses France from pie almost to tete,  is at regular speeds over bumpy track, with stops in villages and cities. But after Bourdeaux the track smooths out and the speeds pick up, until the fields outside the windows are a golden blur punctuated with church steeples.

The group I sat with on facing banquettes passed the time sharing food, reviewing memories of the week, and sorting out knotty points of Church doctrine and practice. Once we’d made a trip to the bar car, it was Theology on Tap: relics, apocryphal gospels, secular orders, miracles—everything on the table like the card-playing traveling salesmen at the beginning of The Music Man.

And then we were pulling into the Gare de Montparnasse, boarding very cramped buses (“If you have hand luggage, pile it on the back two seats,” we were told; “If you have legs, leave them on the curb,” the taller ones among us noted) for the whirlwind half hour tour that, due to scheduling, was all that was left of our half day free in Paris. This was OK with me; I’ve had a whirlwind bus tour of Paris before, on a layover to Rome for Archbishop Schnurr’s pallium ceremony, and it didn’t do much to redeem the taste that Charles de Hell Airport leaves in my mouth. If there are Rome People and Paris People, I’m a Rome Person, though I’m told that if I ever had a chance to just sit at a cafe table by the Seine and watch Paris go by, I’d be a convert. 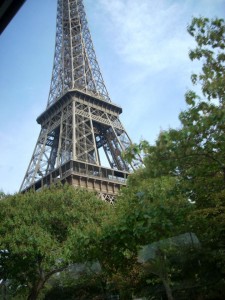 Alas, not this trip. I’m not sure what the Red Bus folks saw for “sights,” but after racing around the Eiffel Tower so fast that all our bus-window pictures look like the Leaning Tour d’Eiffel, and pausing by the Louvre just long enough for our guide to point out how many rental electric cars were lined up out front, we were whisked to the Champs Elysee to pay homage to—I swear—“the only shops open on a Sunday.” For the next 20 minutes we crawled slowly up the Boulevard while our local guide breathlessly pointed out “On your left, THE GAP! On your right, BANANA REPUBLIC! Look! Up ahead, it’s TOMMY HILFIGER! Look at all the police and crowds in front of THE VIRGIN MEGASTORE! Lady Gaga is AT THIS MOMENT inside!” As this roll call of franchises found at the Dayton Mall continued, with added special insider knowledge like “There’s where Tom Cruise eats baguettes sometimes!” and the flagship store of the bakery famous for those French macarons that look like colored chalk and taste like it too, we just collapsed with laughter. The climactic moment? “And there, just there, do you see? It’s STARBUCKS!”

With God’s grace, though, transformation was just around the corner. We crossed the Seine to the Ile de France, and there we were beneath the bells of Notre Dame, where we were privileged to attend Vespers, followed by the weekly Sunday evening Mass of the cathedral parish, the best-attended of the day. Archbishop Schnurr was to have concelebrated with Cardinal Andre Vingt-Trois, the Archbishop of Paris, but the cardinal was out of town at the installation of an auxiliary bishop. So Archbishop Schnurr sat in the cathedra but did not wear his miter, and our priests concelebrated (one, bravely, in French!) with one of the cathedral staff. (EDITORIAL NOTE: My friend Michael clarifies that the celebrant was Msgr Michel Aupetit, one of four Vicars-General of the Archdiocese of Paris, and that it’s cathedral custom that no bishop wears a miter unless Cardinal Vingt-Trois is celebrating, in which case all concelebrating bishops wear theirs, too. Thanks, Michael, for the 2 am email on Stuff Only Liturgy Mavens Worry About but Which Some Americans Might Be Interested in Knowing!) 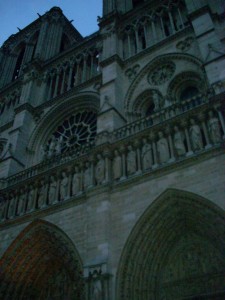 It was amazing to be in that place, not as tourists but as Catholics and pilgrims, at home. About to celebrate its 850th year, the cathedral is a vast, dim Gothic space, only faintly lit by its early rose windows and banks of candles. Incense clouds permeate the air. The singing, at Vespers and at Mass where the children’s choir was featured, was Gregorian plainsong in French and Latin, the treble voices piercing the gloom of the vaulted galleries, where you know Quasimodo—Victor Hugo’s hunchbacked orphan, named for the first two words of the Introit on the day he was left on the steps—still walks. (Cardinal Vingt-Trois must feel some sympathy. His own surname comes from an orphaned ancestor who was left on the steps of a convent, and who was named for the day of the month, 23.) Tucked in the parish bulletin, a familiar sight: the collection envelope for Paris’ annual archdiocesan appeal. We’re preparing our 2013 appeal now, and I couldn’t help but spare a thought for our French counterparts.

Such a deep sense in that place, not only of Mother Mary and her Son, but of Mother Church and her embrace! Around us, ordinary Parisians and visitors of all nationalities worshiped as people have worshiped here for nearly a millennium. And at the end of Mass, all the priests formed a semicircle around the statue of Notre Dame de Paris, and led us in the prayer that salutes the Lady on whom Lady Gaga has not a patch, the Lady who is the undisputed Queen of this place and of our hearts:

Hail, holy Queen, Mother of Mercy,
our life, our sweetness and our hope.
To thee do we cry, poor banished children of Eve . . . 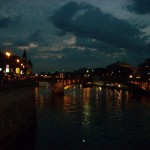 Yes, we are exiles, banished children, pilgrims. But when we left the cathedral, looking back at its glorious facade in the twilight, we knew we are never far from home. And as we crossed over the glittering Seine in l’heure bleu, the celebrated Blue Hour, I realized that I could forgive Paris quite a bit for the sake of Notre Dame.

I had to watch this sequence again after hearing the bells of Notre Dame in person.

NEXT: Final Thoughts and Prayers from Pilgrimage 2012 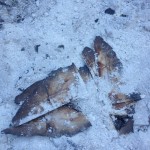 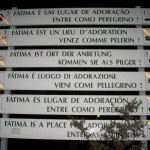 Another Word on the Tragedy of...
Steel Magnificat
Related posts from Egregious Twaddle