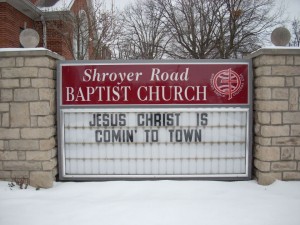 One more midnight gone, but for Christians—especially in Advent—we live always in the end-times. And that’s good.
As a small, fearful child with a galloping case of scruples, I was terrified of the End of the World. Those were apocalyptic times for Catholic school kids, the late fifties and early sixties. There were the weekly drop drills intended to prepare us for the nuclear annihilation that was always thisclose; Sister Maria Consuelo, our Cuban refugee third-grade teacher, was always sending us home with a cheery, “Well, the Russians will probably bomb us tonight, because you didn’t do your homework . . . or pray the Rosary enough . . . or finish the wet tuna sandwich in your lunch bag.” (Additional reason for panic: Not only was the world in imminent danger of ending, it was my fault!)

Those were also the days of immanent spiritual annihilation, encoded in the ominous phrase, The Third Secret of Fatima. When rumors abounded that the secret would be revealed on May 13, 1962, we all prepared for Life As We Knew It to end that day, as all seven seals of Revelation were broken and bowls of wrath and seven-headed beasts and slutty girls from Babylon and other extremely awful stuff descended on the world, and on our particular asphalt school playground corner of it. My friend Mary Dean, whose 12th birthday was that day, understandably found this a very troubling buzzkill.
With the obsessive research skills I would later put to better and more lucrative use, the young me sought out every known sign of the coming of the end, and shared them generously with my hopelessly apathetic sister and friends. When the sky turns dark. When it gets ominously quiet. When the earth shakes (ignore the fact that we were sitting on the San Andreas Fault). When the wind turns the leaves over so you see the undersides (this one I think I got from the signs of a tornado in the Oz books, but I was taking no chances). When statues weep (long before the Doctor, I never blinked around statues, hoping to catch them off-guard in enough time to provide an Apocalypse Early Warning Signal with my wailing).

All this did was give my sister and her friends ammunition to plague me. They’d sit outside the open window of the bedroom where I lay poring over Blue Army pamphlets and chomping down Laura Scudder’s BBQ potato chips, speculating in loud voices: Isn’t it eerily quiet today? Look, did you just see the underside of a leaf? Is it getting darker? Then they’d break into a spooky-voiced rendition of Skeeter Davis’s 1963 hit, Nobodeee knows it’s the e-e-e-end of the world . . . and bust up laughing.

But time . . . especially if it’s allowed to keep ticking . . . is a great antidote to apocalyptic panic. This whole Mayan thing, which we seem to have successfully avoided, never even gave me a frisson. In a way, though, that’s a shame, because the timing of this, coming in Advent and (in the hemisphere-centric North, on the Winter Solstice) is such a good reminder that we are always living in the beginning, in the middle, and at the end simultaneously. Looking to the Last Things—not in the crazy way I did as a child, but both soberly and joyfully—used to be a regular corrective for Christians, and it’s not unhealthy to be brought back to it again.

We began, of course, as an apocalyptic Church, as the Gospel readings for the end of ordinary time and often (as this year) even into Advent remind us. Advent itself means coming, and though we emphasize Christ’s first coming at the Nativity, it is his second coming to which we are aimed. In his letters, Paul helped the first Christians share his gradual recognition that if the end was not literally nigh, it was always at hand. The end—our end—is what does not justify but judges our means.
Throughout Europe, for centuries, it was a message no churchgoer could ignore. Over the west door—the direction of sunset, of endings—of every church, from the Cathedral of Notre Dame to the Sistine Chapel to the tiniest whitewashed English country parish—there was a depiction of the Last Judgment. You could not enter or leave a church without being reminded, graphically, of why you were here in the first place and where you were headed, without a clear and unmistakable guideline for the everyday hours ahead. “In whatever you do, consider your end,” the Book of Sirach says, “and you will not sin.”

They were called “dooms,” these depictions of judgment, from the Old English word for law, judgment, or condemnation. Doom is etymologically related to damn, which also originally meant simply to judge. The artists, whether geniuses like Michelangelo or crude country painters, who threw more creativity into showing the torments of the lost than the bliss of the saved are responsible in part for our giving both damn and doom negative connotations, but on this erstwhile Doomsday it doesn’t hurt to be reminded of a part of the Creed we often overlook. A 15th century English rhyming catechism, Instructions for Parish Priests by Dr. John Mirk, puts it this way:

And He schal come with woundes rede
To deme the quyke and the dede . . .

The world did not end today for us all, but the world ends every day for some of us, literally and metaphorically. Death is only one kind of end. There is loss, and change—even good change ends one part of the world. We are coming up on the anniversary of the greatest change our world has ever experienced, and as T.S. Eliot put it, in the voice of a returned Magus, it was a death and an end to one world:

All this was a long time ago, I remember,
And I would do it again, but set down
This set down
This: were we led all that way for
Birth or Death? There was a Birth, certainly,
We had evidence and no doubt. I had seen birth and death,
But had thought they were different; this Birth was
Hard and bitter agony for us, like Death, our death.
We returned to our places, these Kingdoms,
But no longer at ease here, in the old dispensation,
With an alien people clutching their gods.
I should be glad of another death. (Eliot, “The Journey of the Magi”)

Jesus Christ is coming to town, and whether he comes as a helpless Child or a victorious Judge, he always comes to make us uneasy with the old dispensation and the alien gods we clutch. It is hard and bitter agony to endure the ending of one world and the birth of another, but it is what He chose to endure for us and what we carry gladly for Him. “How happy and wise the man,” says The Imitation of Christ, “who tries now to become what he would want to be at the hour of death.”

The end is (always) at hand, thank God. Thank the Mayans for the reminder to look to it. And as we turn away from the west door and look to the east, to the Rising Dawn, O Oriens, to the turn of the wheel of the year away from darkness, let our fearless song be Come, Lord Jesus! E’en now, quickly come!

December 24, 2012 When Half-Spent Was the Night
Recent Comments
0 | Leave a Comment
Browse Our Archives
get the latest from
Catholic
Sign up for our newsletter
POPULAR AT PATHEOS Catholic
1

Cancel Culture? Or Actions and Consequences?
On the Catholic Beat
Related posts from Egregious Twaddle