So here I am, sitting in the clean and light-filled kitchen of my new apartment in Southern California, basking in the blessing of engaging in the simplest of pleasures that I had denied myself in the worst of the hoarding. Making breakfast. Doing dishes. Taking a shower. Doing laundry, and hanging the clean clothes in an empty closet. Sleeping stretched out on a bed with clean sheets. Sweeping the floor. Seeing the floor.

This week has been a glimpse of heaven, made possible by family and friends who believed in me even when I couldn’t believe in myself. Every breath is a prayer of gratitude. Yet when I look around at the simple, clean, light, airy space where I have been graced to land, this is what comes to mind:

When an unclean spirit goes out of someone, it roams through arid regions searching for rest but, finding none, it says, “I shall return to my home from which I came.” But upon returning, it finds it swept clean and put in order. Then it goes and brings back seven other spirits more wicked than itself who move in and dwell there, and the last condition of that person is worse than the first. (Luke 11:24-26)

I have been in places swept clean and put in order before, believing I had banished the unclean spirits of depression, anxiety, and hoarding, and I know what it’s like when they return with friends. My last condition was very, very much worse than my first, and I know that without work, without prayer, without grace, without help it could be so much very worse again.

That’s true for any of us grappling with a dis-order—whatever keeps us from God and the bliss of doing God’s will for which we were created. I am not making the mistake of conflating mental illness (or any other debilitating obstacle to living faith fully) with demonic possession, but there is a truth here that most of us aren’t comfortable facing: We are engaged in struggle, and we do not struggle against ourselves, or other humans, or the systems of this world alone.

When Greg, my counselor in Dayton, first suggested that I view my treatment as spiritual warfare, I was taken aback. But I very quickly came to understand that he didn’t mean I should blame the devil instead of disease for my condition, or seek exorcism instead of medication. What he meant is that there is a spiritual dimension to any of our earthly battles, and it is often more significant and influential than what may seem to be the physical or mental or emotional etymology. For a person of faith to ignore this dimension, as I had every other time I had attempted to sweep the unclean spirits from my door, is as foolish and fruitless as ignoring medical and psychological and emotional help (which I had also done).

In every spiritual battle, Greg explained, the Enemy uses the same three weapons:

Isolation—Setting up obstacles to relationship and community, planting the notion that you are alone in the darkness, telling you to hide and cover up and barricade yourself for fear others will recognize the darkness inside, convincing you that going it alone is the best choice and that dependency kills.

Lies—Twisting your perceptions, eating away at your trust, making you doubt what you know, playing old tapes: You’re bad, You’re worthless, You’re unlovable, It’s all your fault (when it isn’t) and, even worse, It’s not your fault (when it is), No one can help you, What a burden you are, Give up.

Self-sabotage—We make this last one easy on the Enemy. Once he’s worn us down with the first two, we willingly turn this weapon on ourselves, adopting habits that reinforce the isolation and the lies. We take the path of least resistance, which is different for everyone. In my case, it’s the hoarder’s most common trait: avoidance, the slow dance with the void that begins as occasional procrastination and becomes total paralysis of will. Yes, there is brain chemistry involved, but there is always freedom, always choice to act within the narrowest of limitations—unless, in self-sabotage, we surrender that freedom to the Enemy.

I can’t do this, I said, over and over, when what I was up against began to come clear. Of course not, Greg said. Nobody can. But that’s not the complete sentence. Instead,  you need to learn to say I can’t do this . . . alone.

Hence, the enlistment of allies. Doctors and therapists and family and friends, yes. But spiritual warfare requires spiritual allies, too. And here I sit in my swept clean kitchen, smack in the middle of the feast days of three Holy Ones who just might make up the perfect cleaning crew for those, like me, fighting to regain ground and hold it.

Our Lady of Guadalupe. Yesterday was the feast of La Morenita, the “little dark one” who is the Patroness of the Americas. Her bronze stillness has always been the face of the Mother of God to whom I am most drawn. One of the first things I did in this new home was light a votive candle with her image, which is everywhere in this city—warding off gang tags, hovering maternally over the freeways, lining the grocery store aisles. Tuesday night, the plaza and the Cathedral of Our Lady of the Angels came alive with thousands dancing and singing and carrying roses in her honor on the eve of her feast. Against the weapon of isolation, there can be no better ally. When the people of Mexico felt lost under their Spanish conquistadores, she came to them as one of their own. This was her message to Juan Diego, fearing for the life of his beloved uncle, and to all of us:

Hear me and understand well, my child, that nothing should frighten or grieve you. Let not your heart be disturbed. Do not fear that sickness, nor any other sickness or anguish. Am I not here, who is your Mother? Are you not under my protection? Am I not your health? Are you not happily within my fold? What else do you wish? Do not grieve nor be disturbed by anything.

St Lucy. Today’s feast commemorates a virgin martyr whose name means “light.” There are many legends and customs surrounding Santa Lucia, but they all have to do with seeing clearly and standing firm in faith. Lucy is the patroness of those with eye ailments, because of the story that she either plucked out her own eyes (to discourage a pagan suitor) or had them plucked out as one of the tortures to which she was subjected after her spurned suitor had her arrested. She is often shown carrying her eyes on a plate, God having given her new ones. Who could be a better ally against the Enemy’s lies than the Lady of Light, who stands immovable for truth? I ask, in my mental darkness, some of Lucy’s lucidity, and much of her courage. I want to believe about myself, against the Liar’s lies, what Ambrose wrote in the passage from On Virginity that is the text for today’s Office of Readings:

You are one of God’s people. . . . You light up your grace of body with the splendor of your soul. This is the person Christ has loved in loving you, the person he has chosen in choosing you. He enters by the open door; he has promised to come in, and he cannot deceive. Embrace him, the one you have sought; turn to him, and be enlightened; hold him fast, ask him not to go in haste, beg him not to leave you.

St John of the Cross. Tomorrow we remember the great Carmelite mystic, poet, and doctor of the Church, who wrote so eloquently about the hard work required to battle through the darkness, to sweep the soul clean for the Bridegroom. Juan knew of what he wrote: imprisoned as a child by poverty, as an adult by his own brothers who thought him a madman for championing Teresa of Avila’s Carmelite reforms. He was beaten, held in a space even smaller than the few square feet my hoarding had me down to in the final months, yet his spirit was free. No paralysis, no avoidance for John. He embraced the darkness, setting out into it purposefully, drawn by love, and never stopped. In The Dark Night of the Soul, he offers the strategy for battling the Enemy’s weapon of self-sabotage. He is a true saboteur of the false self, urging the narrow and difficult road, recognizing that even the darkness of depression is a place where God is hidden, waiting to be found.

Deep is this warfare and this striving, for the peace which the soul hopes for will be very deep; and the spiritual pain is intimate and delicate, for the love which it will possess will likewise be very intimate and refined. The more intimate and the more perfect the finished work is to be and to remain, the more intimate, perfect and pure must be the labor; the firmer the edifice, the harder the labor. (The Dark Night of the Soul, Chapter IX:9)

I think the Church has blessed us with this trifecta of Advent saints because she knows that Advent is a time when we all are sweeping a space clean for a second (or third, or hundredth) chance, making a home where there was only chaos. And we all could use the help of a cleaning crew. Please pray for my new beginning, as I do for yours. 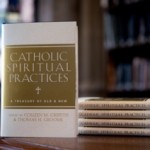 December 9, 2012
Spiritual AND Religious---Surprise!: A Book Review
Next Post 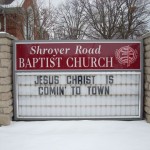 December 21, 2012 It's Always Apocalypse, Now
Recent Comments
0 | Leave a Comment
Browse Our Archives
get the latest from
Catholic
Sign up for our newsletter
POPULAR AT PATHEOS Catholic
1