Jorge Mario Cardinal Bergoglio, you’ve just been elected pope. What’re you going to do next?

According to a tweet from the always knowledgeable Rocco Palmo, Papa Francesco is not going to Disneyland. He’s doing what every good Italian boy—and the new pontiff, though hailing from Argentina, is of Italian extraction—and every good Bishop of Rome does first. He’s going home to Mamma.
Specifically, in this case, Pope Francis will make a private visit sometime tomorrow to the Basilica of Santa Maria Maggiore, the oldest basilica in the world dedicated to the Virgin Mary, to pray before the icon known as Salus Populi Romani—the saving health of the Roman people.

The icon of the Madonna and Child, painted in Byzantine style, is one of the oldest and most revered religious images in Rome. Legend includes it among the portraits of Mary painted from life by St Luke, though art historians generally date it to the late Byzantine era or early medieval era. Once known as Regina Coeli (Queen of Heaven), the image later became known by the title once given by imperial Roman prognosticators to auguries of good fortune for the empire and its people. 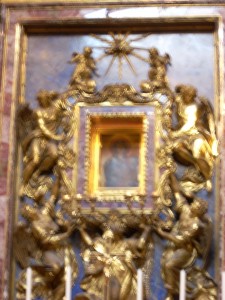 I have had the blessing to pray before the Salus Populi Romani myself, on a 2010 pilgrimage to Rome. (Unfortunately, my blurry photos don’t do the image justice.) That same day, we also visited the Church of St Alphonsus, where the miraculous image of Our Mother of Perpetual Help is venerated. The latter icon is now more popular than the Salus Populi Romani among the local faithful and the pilgrims, but I think it’s good for the new pope to show allegiance to Mary in her oldest Roman representation—just as he spoke his first words from the hard-not-to-think-of-Don’t-Cry-for-Me-Argentina Vatican balcony in charming Italian, wishing the people of his new diocese a Buona sera. The world will have him soon enough—sooner than most, if the news of a Saturday press conference is accurate—but meanwhile, Mamma is waiting.

An interesting sideline for those, like me, who have found comfort in devotion to Our Lady of Schoenstatt. In 1604,  Fr Joseph Rem, a Jesuit (like our new Holy Father!) associated with the Schoenstatt shrine, knelt in prayer before the shrine’s copy of the Salus Populi Romani and asked to be inspired as to which title among those in the Litany of Loreto pleased Our Lady most. He was given the title Mother Most Admirable (Mater Admirabilis), which he then instructed the Schoenstatt choirs to sing three times, in the form of a trisagion prayer. Today, Our Lady of Schoenstatt is known by the title Mother Thrice-Admirable. (Another coincidence: There is a Catholic university named for Mater ter Admirabilis in the new pope’s former Archdiocese of Buenos Aires.)

Santa Maria Maggiore,
Our Lady of the Snows (a title of Mary derived from the legend that the plan for the Basilica of Santa Maria Maggiore was indicated by Our Lady by a miraculous August snowfall on site),
Maria, Salus Populi Romani,
Mater ter Admirabilis,
pray for your son, Papa Francesco, Bishop of Rome and Vicar of Christ,
and for all your children everywhere!

UPDATE: Here are links to the coverage of this morning’s profoundly moving visit to Santa Maria Maggiore, where Pope Francis prayed before the Salus Populi Romani for half an hour. And for those who took issue with his offering of flowers during Lent, puh-leez! When you go home to Mamma, you bring flowers no matter what the season!

At The Deacon’s Bench, Deacon Greg Kandra links to John Thevis’s insights into our new Papa’s first 24 hours on the job, and shares my belief that he is The Real Deal.

With an H/T to Pat Gohn’s Among Women podcast Facebook page, here’s another account of the visit from Rome Reports, with video.

March 2, 2013
A Clock Set to Eternity: Why It's Never 'Time' for the Church to Do Something
Next Post

March 21, 2013 Pope Francis: Intervention for a Hoarder Church
Recent Comments
0 | Leave a Comment
"Well if you put your self in her, Iam 100%,I have done the same, I ..."
Boston Mwanakatwe simbeye Wrong Choice, Bad Love: Why Bernadette ..."
"OMG GET A LIFE, really you are just twisted, this women went THROUGH HELL, god, ..."
Russ Wrong Choice, Bad Love: Why Bernadette ..."
"You are all Bloody Idiots, you have heard bits and pieces of what went on ..."
Russ Wrong Choice, Bad Love: Why Bernadette ..."
"Elinor, I was catechized in the pre-Vatican II Church and it was awful, no Scripture, ..."
RPlavo . What’s Really Wrong with Catholic Religious ..."
Browse Our Archives
get the latest from
Catholic
Sign up for our newsletter
POPULAR AT PATHEOS Catholic
1