Five for Joy: Michael, Mary’s Mantle, and Other Saturday Mysteries

After a week of quiet for prayer, work, and celebration, I’m back with a First Saturday’s worth of joyful mysteries.

5
It’s been stormy in Catholicland, so I am delighted that we are going into this weekend under the doubly papally invoked protection of St Michael the Archangel. He’s been my personal patron since my journey away from and back to the Church began, always leading and prompting me toward home again. I don’t think it’s coincidental that many of those who reached out to me, bore me up on their wings, and helped me battle demons throughout both my reversion and my wrestling with mental illness are named Michael. In a larger sense, I am full of joy that we are being invited, as a Church, to re-embrace in fullness the mystery of Michael’s spiritual protection.

Though the devil always tries to disfigure the face of the Archangel and that of humanity, God is stronger, it is His victory and His salvation that is offered to all men. We are not alone on the journey or in the trials of life, we are accompanied and supported by the Angels of God, who offer, so to speak, their wings to help us overcome so many dangers, in order to fly high compared to those realities that can weigh down our lives or drag us down. In consecrating Vatican City State to St. Michael the Archangel, I ask him to defend us from the evil one and banish him. (Pope Francis)

I have long thought it a pity that devotion to St Michael has so often been coopted in recent decades by those who saw the demonic in anything new, and that the very useful Prayer to St Michael was considered the exclusive property of those who longed for the return of the EF. It was a liberating thing when my spiritual director in Dayton encouraged me to make this prayer a weapon in my own healing battles. I am grateful to Pope Francis for his frankness in calling the Devil the Devil, and placing the protection of the Vatican under the aegis of the great prince “who is like God” (along with St Joseph).

Pope Francis, in his homily this morning at Casa Santa Marta (h/t Deacon Greg Kandra), also invoked the protection of Our Lady’s mantle over all of us, using the words of the most ancient of the Church’s prayers for Mary’s intercession, Sub tuum praesidium:

Beneath your compassion,
We take refuge, O Mother of God:
do not despise our petitions in time of trouble:
but rescue us from dangers,
only pure, only blessed one.

This anthem, which influenced the later Memorare, was first used in the Coptic Orthodox Christmas liturgy. Today, when Coptic Christians are more in need of that mantle of protection than ever, let us commend them and our whole world to our Mother’s care!

4
The other double papal bonus of the week is Lumen fidei (The Light of Faith), the encyclical nearly completed by Pope Benedict XVI before his resignation, added to and completed by Pope Francis, and released—under Francis’s seal and signature, as is appropriate—as “the work of four hands.” I’m only halfway through a close reading and reflection, so I’ll have more later, and there are lots of good guides and responses already appearing. Church being Church, there’s entirely too much speculation about who wrote what for my taste, especially when the speculation is only a thinly disguised pretense for pitting one pope against another. Elizabeth Scalia addresses the futility and missing-the-pointness of that here. I would just encourage you to read this most accessible and inspiring of “official documents” for yourself, listening not for individual voices or factions but for the glorious harmony of Christ speaking to his sorely divided people in one voice, calling us home to himself, the One Shepherd. Here’s just a few bars of that ineffable melody:

Our culture has lost its sense of God’s tangible presence and activity in our world. We think that God is to be found in the beyond, on another level of reality, far removed from our everyday relationships. But if this were the case, if God could not act in the world, his love would not be truly powerful, truly real, and thus not even true, a love capable of delivering the bliss that it promises. It would make no difference at all whether we believed in him or not. Christians, on the contrary, profess their faith in God’s tangible and powerful love which really does act in history and determines its final destiny: a love that can be encountered, a love fully revealed in Christ’s passion, death and resurrection. (LF, #17)

If this encyclical were set to music, my choice for this passage would be John Coltrane’s A Love Supreme—but you can choose your own soundtrack. 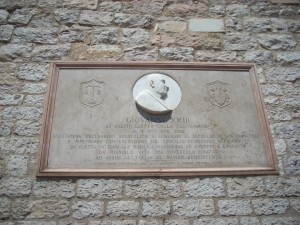 As I’ve written here before, I am without apology a Catholic of the John XXIII generation. And so I am squeeing with joy over the news that Blessed Papa Roncalli will join Blessed John Paul II in being raised to the altars. Church being Church, of course, this announcement—including the news that, as is his prerogative, Pope Francis has waived the requirement of a second miracle attributed to Blessed John XXIII’s intercession—is being read by many as a partisan triumph or an utter disaster.

Wherever you are on this news, please pause a moment to recollect that canonization is but the earthly process by which we are invited into the mystery of the Communion of Saints. Canonization is not the making of saints, but the joyous recognition of them as people like us whose lives of heroic virtue make them companions on our journey, unlimited by time and space, the loved ones standing at the finish line cheering us home. The Tradition is that we are called to sainthood, no matter what. The tradition, the process of formal recognition, can and does change over the centuries. That does not make us hypocrites or laughing stocks—though comedian Don Novello as Fr Guido Sarducci had a pretty funny response to the canonization of St Elizabeth Seton—but a Church responsive to the Spirit.

Meanwhile, I will keep on doing the happy dance that we will have a saint who wants to keep the windows open. 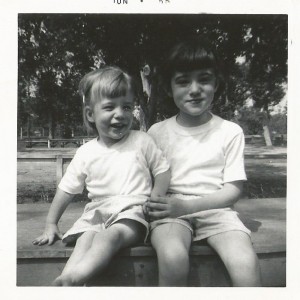 My celebrating this week was about my sister’s birthday—which also happens to be the birthday of our nation. She turned 60 this year, this firecracker who appears at first glance to have come not only from different parents but from a different universe than me, and it was just joy beyond all telling to have the chance to be here for the party. She’s the younger, but I’m the prodigal in our family, long away and long resistant to learning the wisdom of the heart she practices every day. I got the opportunity to stand up and tell her what she means to me, and how I am here in large part because of her steadfast and uncompromising love and desire for what’s best for those she loves. For those of you who know how family embodies God’s grace, I give thanks with you. For those who are estranged, you are in my heartfelt prayers: come home—let yourself be welcomed home—before it is too late. Nothing that separates us is more important than what binds us. And that fatted calf tastes awesome, especially when it’s grilled and served up with sparklers under the stars!

1
Speaking of families, here’s a joyful shoutout to Fr Greg Boyle, SJ, and his Homeboy Industries, where young men and women leave gangs behind and reclaim the blessings of fatherhood and motherhood. If you need a jolt of inspiration every day (and who doesn’t?), follow Homeboy Industries on Facebook and share the powerful photos and Thoughts of the Day. “God’s tangible and powerful love” indeed. I also take joy in the presence of two of my Patheos homeboys. Max Lindenman is back in the house, talking about the reality of living Catholic in a voice like no other. And Sam Rocha‘s little black book—a celebration of philosophy, the love of wisdom—is working its way into everybody’s hands, which is where it belongs. (My 30-year-old nephew, when asked yesterday why he majored in philosophy, said “Because everybody should. There’s no education without it, duh.”) I will have a longer review of A Primer for Philosophy and Education soon, but don’t wait. Check it out yourself.

What mysteries are bringing you joy this weekend?

July 26, 2013 Adios, Wretched Hive of Bile and Gluttony
Recent Comments
0 | Leave a Comment
Browse Our Archives
get the latest from
Catholic
Sign up for our newsletter
POPULAR AT PATHEOS Catholic
1

The Oxford School Shooting and its...
Steel Magnificat
Related posts from Egregious Twaddle

Catholic
A Musical Birthday Card to (and from) St...
Egregious Twaddle
TRENDING AT PATHEOS Catholic