Hey, Who You Callin’ Egregious?: More on a Blog Name

Hey, Who You Callin’ Egregious?: More on a Blog Name September 12, 2013 Joanne McPortland

In which Pope Francis gives me an inadvertent shout-out, and I get schooled in the etymology of egregiousness.

The news service Zenit has released its English translation of Pope Francis’s recent open letter to the founding editor of Italy’s La Repubblica, a secular newspaper known for posing challenging questions to the Church’s role in Italian life and world politics. In the letter, the pontiff addresses some of these questions directly and personally, as a conversation with Eugenio Scalfari, the editor. This—along with gleeful coverage of the pope’s joyride in an ancient Renault he’s been given by a slum priest who wanted the pope to be able to get around (though I think His Holiness would stand a better chance taking the Church to the margins on foot or by bus or scooter than by car in Roman traffic)—has gotten a lot of play in secular media, who see it as one more way in which +Francis is astoundingly, groundbreakingly New and Different.

Not so much, of course. Popes have always engaged in dialog with the world—some better at it than others, depending on what your notion of what that dialog should accomplish, and in various ways depending on the media of the time. (Don’t imagine, for example, that Julius II’s commissioning of the Sistine Chapel frescoes was not intended to send a message!) This pope, Francis, simply doesn’t know how to speak in anything but dialog. He’s an Argentinian of Italian extraction: conversation is how life happens. He ends every sentence with the invitatory No? In a move similar to this recent letter to La Repubblica, Buenos Aires Archbishop Bergoglio engaged in and later published a series of conversations with Rabbi Abraham Skorka on hot topics relevant to both traditions. (You can find it in English, here.) Pope Francis’s morning homilies and his Angelus meditations are sprinkled with call-and-response moments worthy of a black Baptist preacher—say, Martin Luther King, Jr. The big surprise would be to find +Francis spouting unilateral imperatives in the papal first-person plural.

Thanks to my friend Michael Liccione‘s Facebook link to the Zenit translation this morning, though, I have a whole new outlook on this blog’s mission. Several people responded to Michael’s post with alarm and puzzlement over the following phrase:

Michael, who is a very smart man (and would love to find a Church-related position he isn’t told he’s overqualified for, btw), quickly clarified that Francis was not playing some twisted game of gotcha, setting up his agnostic interlocutor with honeyed compliments only to end with an insult. He was, instead, using egregious in its original sense, which is retained in the Italian: distinguished.

I went digging through the etymology, and found that indeed egregious shares a common root with gregarious: grex, the Latin word for “flock.” Gregarious (sociable) people love hanging out in the flock, pressing the hooves as it were. To be egregious means to be outside of the flock, beyond it, distinguished from it. That began as an honorific, but over the years, as the gregarious among us became the extroverted majority, egregious took on the negative connotation of outlandishly out-of-bounds, superlatively beyond the flock’s standards of what is appropriate.

I named this blog (as you can read here) for an egregious-in-the-bad-sense example of my own egregiousness. But now I think I will aspire to the original meaning, providing here, with God’s grace, not just Twaddle but Distinguished Twaddle. Sounds egregious, no? 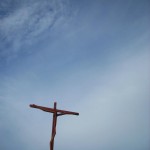 September 14, 2013 The Exultation (sic) of the Holy Cross
Recent Comments
0 | Leave a Comment
Browse Our Archives
get the latest from
Catholic
Sign up for our newsletter
POPULAR AT PATHEOS Catholic
1