Is the PCUSA still Christian?

Given the recent decision to bless vice, the status of the Presbyterian Church USA is difficult. Is it Christian?

The PCUSA has removed itself from the line of historic Christian churches and we can only pray for her recovery. Talking to the Presbyterian Church USA will now be interfaith, not ecumenical dialog, yet discussion must continue as we would with any sect historically related to Christianity, but not Christian. The PCUSA fits the classic definition of a “cult,” though the word has become useless outside of academia since it has become merely  an insult.

I think it is better just to say: the PCUSA is not Christian in the traditional sense of the term. It is no longer part of the “mere Christian” community.

I am not insulting the PCUSA to say it is not Christian, just identifying it. Of course, since I am a Christian, I think it is a bad thing to be non-Christian, but the PCUSA apparently does not agree. Organizations are not going to Heaven, no not one.  I am not judging the rightness of people in the PCUSA just whether the denomination is part of “mere Christianity” (as CS Lewis calls Christendom).

The PCUSA may be a church, it may be (for all I know) Presbyterian, it is certainly American having cut itself off from most of the global church, but it is not Christian.

First: Aren’t you being narrow? They hold the classic creeds. Define what you mean by Christian.

I think a group is Christian if it can confess the historic creed of Nicaea, has continuity in history with the movement started by Jesus, and encourages the practice of holiness in daily living. The PCUSA passes the first two tests and (now) fails the third. It has taken a vice and declared it a virtue, even creating sacraments for the vice. From the New Testament forward there were (at least) two reasons to break fellowship. One was doctrinal and that can be tricky. What doctrines are serious enough to merit breaking off dialog? The second basis for disfellowship  is easier to discern though more painful to implement.  If a church condoned sin, then it was in big trouble. One job of the gathering of the people of God is encouraging a lifestyle consistent with God’s will.

The PCUSA has always contained sinners. All churches do. That is why we have churches: we come as we are to become different than we are. Nor is “gay marriage” or homosexual activity the most pervasive or worst sin in the American church. As far as I can judge, we have far greater problems at least in numerical terms. The PCUSA is not affirming any of these other sins or problems. It is not suggesting ways to bless a lack of chastity for any other group of people.

This is not the only sin, or even the worst of sins, but it is the only sin that the PCUSA no longer calls a sin and is willing to celebrate. This makes it different even from divorce in the church. Nobody thinks divorce is a cause for celebration, even if (some) churches tolerate it in members as a necessary evil.

In doing this, the PCUSA has cut itself off from every saint that has ever lived: Catholic, Orthodox, and Protestant. It has cut itself off from the global church and all of church history. Like American churches that defended other “peculiar institutions,” it has not listened to the global community. The flow of church history is toward chastity, see the virgin men worshipping in Revelation, not to an expansion of sexual options outside of traditional marriage.

Second: How judgmental and unkind of you!

I do not feel angry with the PCUSA. I do find it useful to make distinctions to further dialog. Splinter American and Western groups like the ECUSA and the PCUSA are dying rapidly, but still contain people created in God’s image. If we are to talk, we have to know what divides us. In cutting itself off from right practice and celebrating a Christian sin, the PCUSA has become a spin-off religion.

This religion has many beliefs in common with Christianity but has ceased to function as Christians do. It is unholy.

Third: Who are you to judge the faith of members?

I know many devout Christians in the PCUSA. I know Christians wiser and holier than I am in that group. They do not agree with the direction their organization has taken and have been hurt and left behind by this cruel change. They have much invested in facilities and organizations related to the PCUSA. They are now deciding what to do and must be given time in which to do it.

I don’t know what I would do in their place.

Many people will go to Heaven despite the churches we have joined. We are all there by the grace and the mercy of God, but that does not make the bad groups or denominations better. More than a few will be saved despite the PCUSA and a few because of it. God can use anything. That does not mean that we have to support a bad group.

Good always comes but woe to the group that makes it harder.

Fourth: I know of a very good PCUSA church.

I do too and that individual church is a Christian church: creedal, historic, and teaching right practice. I cannot judge whether a good church can stay part of this non-Christian organization or how long they have to decide. A congregation might stay  in order to witness to the Faith or to recover what has been lost. A congregation might ignore the bad national group and keep a strong, Christian regional organization alive.

Finally, the PCUSA is “Christian” in the sense that the denomination can only be understood in the context of Christian history. PCUSA like the Episcopal Church USA is part of the family of new religions that owe all their good ideas to Christianity and their errors to spirit of the age in the West. They are not “liberal Christians,” but something new. They should celebrate this, since they think they are right.

The rest of the Christian world has seen it all before and moves on.

March 26, 2015 Do we want an adventure?
Browse Our Archives
get the latest from
Eidos
Sign up for our newsletter
POPULAR AT PATHEOS Evangelical
1 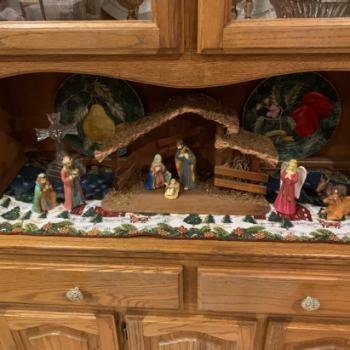