Temar Boggs and Chris Garcia saw a girl being abducted by a stranger. Boggs says he did what “anybody else would do,” but I think he is being generous to the rest of us. Temar Boggs is not just a hero, but a modest young man. When they saw evil, Garcia and Boggs chased after the girl on their bikes. When the evil man saw the two brave youths were chasing him, he let the little girl go.

The story of their good deed cannot be told enough times. Look at this young man. Imagine the courage he had. Remind yourself that young men like this are in every neighborhood in America. Aren’t you proud of these sons of the Republic?

These are our children: Temar Boggs and Chris Garcia.

The evils of the nation are part of the true story of America. We cannot hide from them, but another part of the story is the culture that produced Boggs and Garcia. They saw evil and they acted. In Biblical language, they faced a frightening situation when many would have run the other direction and they “played the man.”

They did not play the role of coward, look for someone else to act, or play the role of bystander recording the horror on their phones. These youths, still children really, played the man and in doing so, give me courage today. When I see evil, I must act. When do I act? I act when I see the evil, not when I am ready. My opponent may have a car and I am stuck with a bike; but act I must. The moment of truth doesn’t wait for me to get a driver’s license and a car or receive training.

There is no Hero Hotline or time to call it if there were when the time comes to make heroes.

Boggs and Garcia played the man and are well on their way to becoming real men. Later we can recall the wrongs left to right in that nation, but for the moment we have Boggs and Garcia peddling like fury to rescue a girl they did not know from evil they could hardly imagine. This is an image that should be brought into every home on the news. These are the young men who should be honored and feted by the popular culture.

I am sure they are not perfect. Most heroic deeds cannot wait on saints to answer the need. We get called to do good while  going about our daily business. Boggs and Garcia were carrying a couch and suddenly challenged to act when they had no time to consider. They dropped the couch and rode, rode, rode and saved a child. If I could write music, I would write of that ride. If I were a poet, I would immortalize it. All I can do is see what they have done, honor them with these words, and hope to play the man as they did when my moment comes.

Take hope. The image of God in each human is not yet so distorted by our institutional sins and our personal follies that heroes cannot arise in our towns. The press is not so jaded that it ignores the good stories. Both political parties still recognize the decency of a good deed like the one done by Temar Boggs and Chris Garcia. Our schools, neighborhoods, and churches did something right to raise these children this way.

God bless you, Temar Boggs and Chris Garcia, and God bless the United States of America. 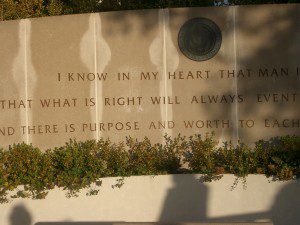 March 23, 2015
Finding Truth: A Review and Some Comments
Next Post

March 25, 2015 Is the PCUSA still Christian?
Browse Our Archives
get the latest updates from
Eidos
and the Patheos
Evangelical
Channel
POPULAR AT PATHEOS Evangelical
1