A Hell of a Day: Holy Saturday 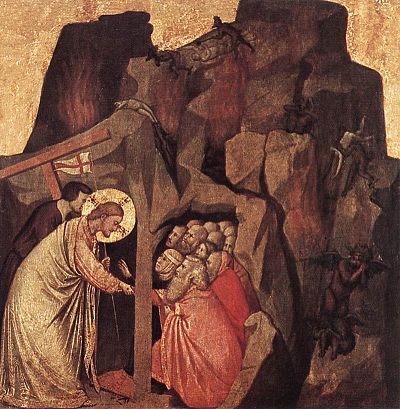 Today is the day that Jesus went to hell, the place of the dead, with hope. If everyone else rightly abandoned hope in the inferno, Jesus came full of hope, faith and love and set the captives free.

Death fought Hope and Hope won. As a boy, I used to think of Holy Saturday as the “day off” in the Holy Days. God died on Good Friday and the tomb was empty on Easter morning. Holy Saturday felt like a hallway to go from the funeral to the party.

“When he ascended on high he led a host of captives,
and he gave gifts to men.”a 9(In saying, “He ascended,” what does it mean but that he had also descended into the lower regions, the earth?b 10He who descended is the one who also ascended far above all the heavens, that he might fill all things.)

Killing God was Hades shattering, because Jesus, fully God and fully man, went to the place of the dead with His divine nature. Death could not contain the Divine and so in the language of the ancients: Christ harrowed Hell. While I am sure this was harrowing for some denizens of this dark place, the image is more of a looting of Hell. Jesus went, preached the good news that the Word had become flesh, and set captives free. Ancient Christian tradition says that the righteous dead, including our Mother Eve and our Father Adam, were led forth in victory. Holy Saturday marked a cosmic victory that split open the tomb on Easter morning! Every Sunday most Christians (Catholic, Orthodox, and Protestant) affirm the truth of this idea when they confess in the Creed of Jesus: “He descended into Hell.*”

Nobody is forgotten. Everyone has a chance. Eve and Adam stood before one tree and chose to learn good and evil by doing evil. Jesus was raised up a different tree and died, partly so that that original pair could be redeemed. They paid the price for choosing badly, but then heard the good news and chose differently. They were redeemed! Justice was done and love found a way to honor justice while having mercy.

When I am asked about those “who do not hear” the Good News of Jesus, this truth gives me comfort. Jesus descended to the very place of the dead to preach and set free those that would listen. Nobody was forgotten. What happens at the moment of death? Are we confronted with one last moment of clarity and allowed to choose? I do not know, but this much is sure: a God who would descend by choice to the place of the dead will be just, merciful, and loving.

Nobody will be in the great City of God who was not brought there by Jesus. For some subjects of New Jerusalem, they will have waited for Jesus to redeem them. For many of us, God will give us the faith and grace to appropriate what Jesus did for ourselves. A blessed few had the great change happen in their lifetimes . . .

*I am using the older English usage where “Hell” can refer to Hades or the place of the dead. “Hell” is also used as a word for the place of eternal punishment, the lake of fire. Jesus did not go to this second sense of Hell!

April 16, 2017 Truly, He is Risen and is Reigning
Browse Our Archives
get the latest updates from
Eidos
and the Patheos
Evangelical
Channel
POPULAR AT PATHEOS Evangelical
1

Should Christians Fight the Culture or...
Cranach
Books by This Author John Mark Reynolds

Still Waters
I love Psalm 23, and often draw strength from it. After recent...
view all Evangelical blogs
Copyright 2008-2021, Patheos. All rights reserved.