Today is a Good Friday 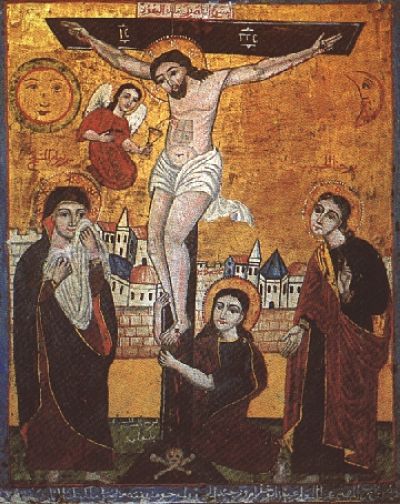 The first time I saw Christ on the Cross on an Eastern icon, that was my thought. My very wise pastor said this representation said many things, but that two of them were the fact that Christ was in control and that the central fact of Good Friday was not the evil done to the Lord, but the good Jesus was doing.

Jesus was making a very bad thing into a very good thing.

We do not glory in His pain, but in His choice. We do not celebrate death, but victory over death. The Romans are not the great actors in the story, but the God-Man who shared death with us so we could share life with Him.

Even when Jesus is pictured before His death on the Cross in the East, he looks peaceful and not tortured. Of course, dying on a Cross is painful, but read the Gospels. The focus is less on what the Romans did and more on what Jesus said and did.

Read the Gospel accounts. They do not flinch from saying what happened to Jesus, but they do not describe it in Mel Gibson detail either. They tell a hard truth: people chose to kill a good man.

We know that few very good men, doomed to die, transform their deaths into something greater. Socrates took hemlock and showed Athens his courage and justice over against their cowardice and injustice. We recollect Socrates, not because we love his dying, we mourn it, but because we wish to emulate his courage. Yet the bowl of hemlock is not the wood of the cross or the iron of the nails: Jesus did more than Socrates.

Jesus was tormented, but not just by the Romans. In His person, Jesus felt and took on the pain of every human being that every lived. He carried our burden, our guilt, and our shame. He knew, not just by omnipotence, but through feeling. His contemporaries chose how He would die, Judas chose to betray Him, and Jesus took all that badness as a means to experience our condition.

When Jesus forgives, it is from knowledge and experience.

Here is what the Good and Holy Friday Eastern icons capture: the victory of Christ. He allowed us to choose freely and took the consequences of our bad choices. He did not have to do so, but it was better to do so. Jesus showed people what we do when we face justice. When our fake and hypocritical “justice” faced real, authentic, divine justice, the result was just as Socrates’ students feared: “This I will proceed to describe; but as you may think the description alittle too coarse, I ask you to suppose, Socrates, that the words which follow are not mine. –Let me put them into the mouths of the eulogists of injustice: They will tell you that the just man who is thought unjust will be scourged, racked, bound –will have his eyes burnt out; and, atlast, after suffering every kind of evil, he will be impaled . . .”

Jesus allowed us to go through with it. He allowed us to fail and fail utterly, but let the pain of the failure fall on Himself. He was victorious at every point.  We tried to kill Him, He gave up His life. We sent Jesus to the place of the dead, He used the chance to harrow Hell and set prisoners free.

Christ is victor on Friday and not just on Sunday.

April 13, 2017
Eating and Drinking with Your Friends: On Holy Thursday
Next Post

April 15, 2017 A Hell of a Day: Holy Saturday
Browse Our Archives
get the latest updates from
Eidos
and the Patheos
Evangelical
Channel
POPULAR AT PATHEOS Evangelical
1

Ch-Ch-Changes
I'll write a more traditional post later in the week, but today...