“Wisdom” from Bud Plays Junior High Football: A Message to our POTUS 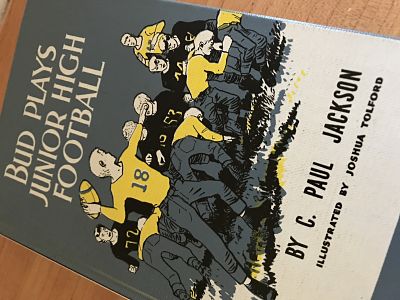 This Presidency needs some advice and it is time to look to the President’s childhood to find it.

There are serious issues in our times and then there is Bud Plays Junior High Football. If there was ever a book in which one could rest one’s weary mind, this is that book. Bud plays junior high football. That is the plot. Bud wins the championship. That is the spoiler.

Bud never “stops to think until” he “has done something” and he looks forward to eighth grade for one reason: he can go out for the sport’s teams. Bud loves his mother and the Roosevelt Roughriders. His life is not much more complex than these facts as he and his best friend Dick triumph over adversity.

Bud is a good guy and he wants to win. C. Paul Jackson, the author of this book, also seems like a good guy and while his book isn’t War and Peace, it isn’t evil either. 1957 had virtues.

C. Paul Jackson was not content merely to give us what we wished to have: a story of one lad’s triumph against bully boys and the snobs at Edison. He gave us advice. Here it is:

The book was written in 1957 when our President was eleven. These rules can right his flagging administration.

Let’s apply each as if our POTUS was flagging, low energy, the guys from Edison knocking him on his can and we get to give him the straight dope:

The other guys want you to lose and they know if you “pop off” (as Coach calls it), then they can take advantage. Don’t do it, Mr. President. Don’t give them the satisfaction. Keep your cool.

Mr. President, you are aggressive, good. You have this rule down. Good job.

You have to warm up. Don’t think you can win without studying. That’s ok in elementary school, but this is the big one.  Those guys at Edison (you know who I mean!) want to mess with your mind. They think we Roughriders are losers and you know what? We have been. Don’t wing it, Mr President. They are ready for our best stuff, give them yours and that is going to include some skull work.

Do you know the score? You can bet those snobs at Edison do. Make sure you know how close the midterms are, what the CBO is saying, and the details of that NATO briefing. The guys are counting on you.

You are in the Big Game, really the biggest game this side of Heaven. This is not even junior high football anymore. This is the Super Bowl, the huge one. Put your all into it. The next four years will go fast, Mr. President. Don’t be low energy. Do your homework, hit the line, fight!

Play fair. I know the Edison guys are mugs and thugs. We all know it. Hit them hard, but hit fair. Don’t tell falsehoods. Coach will bench you if you do. They say squares play fair, but you know what? Those squares got you into the game. Don’t let them down.

They want you to fail, Mr. President. They think you will quit, if not officially, by refusing to play by the rules. Trick them. Learn like Bud did. Learn to follow Coach’s advice. Shake loose the losers like Bannon who tell you to cut corners. As Coach would say: “Cheaters never win and winners never cheat.”

Mr. Bart Starr would agree and he played for Vince Lombardi, the guy whose name is now a trophy for winners.

Bud won the big game when he listened to Coach, also when he learned a valuable lesson. Let’s let Bud sum up what he learned as he stood with his friend on the field of his great victory: “‘Dick’s right,’ he thought, ‘I really did think before I did something– for once!'”

May 29, 2017 Jesus is Not Headed to the Stars . . . Still- Questions from M
Browse Our Archives
get the latest updates from
Eidos
and the Patheos
Evangelical
Channel
POPULAR AT PATHEOS Evangelical
1

Evangelicalism #1: why are so many young people...
Evangelical Christianity dominated much of the American Church over the last 50+...
view all Evangelical blogs
Copyright 2008-2021, Patheos. All rights reserved.