The Shield of Achilles (A Guest Post by James Harrington)

“Ancient Greece” covers hundreds of years and miles so that talking about a “Greek world view” or “what the Ancient Greeks thought” poses a problem. Nonetheless, scholars have discerned some essential similarities that united Ancient Greeks culturally across time and space in spite of local variations and inevitable dissenters. At rock bottom, the Ancient Greeks viewed reality as an agon, or contest. The strong properly ruled over the weak in a hierarchy of dominator and dominated: victor over vanquished, gods over men, men over women, adults over children, free over slave, human over animal and plant. Following this logic, the Greeks structured their society in a series of contests that proved who was the superior. The most important of these was warfare, but religious games, poetry competitions, dancing competitions, dramatic competitions, and rhetorical debates were also of key importance. To the Greeks, a boxing match or dance contest were not merely entertainments but expressions of Reality.

An excellent literary example comes right at the beginning of Greek literature in Homer’s Iliad. The famous Shield of Achilles (Book XVIII) gives us the Greek world-picture in microcosm. The shield is an image of the cosmos with its round plate symbolizing the earth bounded by the ocean (the waters below) and the stars (the waters above). Upon this miniature cosmos, the drama of human life plays out in a series of ordered and unordered conflicts: man against man, and man against nature. In the scene with the law court, we see ordered conflict of man against man. Due process restrains an argument that might otherwise turn murderous. The struggle is not just between the two bringing the suit, but also between the judges who strive to win the prize for the “straightest” judgment. The final image of the dancers is also a competition as only the most beautiful are allowed to participate in the dance. The companion image is of men in unordered conflict as shown by the image of the city at war. Even the attackers are in conflict with each other as they try to decide whether to take the city by storm or to exact protection money. In the world of nature, we see the king presiding over the conquest of the earth in the form of plowing. There is good order and man reaps the fruit of the earth with which to make feast and offer sacrifice to the gods. In the companion scene, a lion devastates a herd of cattle, throwing the herders into disorder and reasserting the power of nature in the conflict between man and his surroundings. All these struggles play out upon a shield, itself a fundamental article of human conflict. This shield, Achilles bears upon his shoulders Atlas-like in image of a world held and borne up by conflict. Here is the core of the Greek world-picture: that the cosmos is upheld by strife and competition and men make the best of it for the short time that they live and breathe upon the earth. 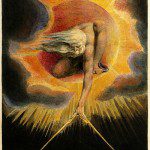 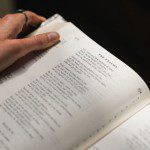