A Dialog with a Critic: Athens Without Jerusalem (Guest Voice: Jeff WIlliams)

On occasion one meets a critic who is thoughtful and argues an old idea in a new or interesting way. In the past, I have asked people with perspectives different than my own to present ideas and have then responded. This is an uncivil age and since “loving your enemies” is a core Christian value, and it is impossible to love people with whom you have no dialog, I enjoy such opportunities.

Since my passion is teaching Greek, Roman, and Christian thinkers, I welcome a challenge to the idea that Christianity is an important part of the DNA of what is sometimes called “the West*.”  Such critics allow me to examine my own bias and assumptions.

Jeff Williams is one such critic. A University of Chicago grad, he agreed to present his argument and I post it here unedited (except for some formatting and the title). While I do not agree, quite strongly disagree,  the ideas are common enough in parts of the academy, especially more secular “Great Books” or dialectical programs that the engagement is worthwhile. If the idea, like secular dialectical education, is more rare than it used to be, I have still benefited from reading or being taught by those influenced by this position.

I will allow the post to stand without immediate rebuttal, which I think fair to the flow of his argument, and will respond separately after taking time to consider the argument and will link when this is done. Otherwise this post will stand as written even after my rebuttal.  I appreciate Mr. WIlliams agreeing to participate. Mr. Williams:

I reject the claim that the west was founded on the two pillars of Greece and Jerusalem but rather stems directly from the single pillar beginning with Thales of Miletus around 500 BC and developed for the next 700 years through classical Greece and Rome, at which time a strange Asian religion was grafted onto it. When I ask Christians what of value in our beliefs today would we not have developed on the basis of the single Grecian pillar they usually offer up dignity of the individual or democracy, or other concepts that clearly either date back to Ancient Greece or Enlightenment rationalism. They then switch to the more tenable province of the arts, and here I have to admit an influence. But through the arts we can also see how this graft clung firmly for centuries and appropriated all forms of art to its own purpose, the process of rejection taking place up through the enlightenment when the graft finally failed, and Nietzsche’sannouncement some decades later that God had been killed by those rationalists.

I can appreciate La Cathedrale de Chartres, Bach and other authentic works of the Christian era because they presence a holiness in Being that always transcends the local religion. I can say the same for great Islamic works, such as truly authentic carpets and mosques. They all point to Being, but in the local dialect. Christianity’s influence on Western art began in the early Middle Ages, started to wane with Renaissance Humanism, and moved to the fringes with the Enlightenment. The late Middle Ages, dominated by the Church, showed their greatest poets in feverish nightmares of Hell and its various tortures; but with the Renaissance the vision turns to the universe and man’s place within. With Shakespeare, of whom it is often said he was certainly a catholic… or a pagan or an atheist, attention nolonger centers on God, but rather on this nature of man and his measure of the world. Music clung to its religious tradition a bit longer, and we see Bach in the 17th century creating music for the glory of god through the Lutheran prism. His music is both profound and limited; within tight bounds there is an authentic passion, but also an imposed fussiness – the constraint of dogma. Contrast that to Beethoven, where Haydn, his former teacher, attested to his atheism, while others described him as Deist or a type of Spinozan pantheist.

Beethoven’s work combines the great power of clashing galaxies, the lightness of the stars, and slow and uniquely profound passages with slightly discordant and disturbing bass lines that give hint of the chaos on which our brave foundation rests. His work is the most profound and fully cosmic experience of Being yet produced and signals the final emancipation of art from the strictures of religion. It’s direct experience of the scope, depth, and mystery of Being contains more authentic wisdom than Einstein’s General Theory of Relativity – something no earlier work of art saddled with religious dogma ever achieved.

But the world has since turned desolate, you might add. True enough. In section 125 of the Gay Science Nietzsche, through The Madman, announces the murder of God and the ensuing vertigo that yet today afflicts us:

“Where has God gone?” he cried. “I will tell you. We have killed him — you and I. We are all his murderers. But how have we done this? How were we able to drink up the sea? Who gave us the sponge to wipe away the entire horizon? What did we do when we unchained this earth from its sun? Where is it moving now? Where are we moving now? Away from all suns? Aren’t we perpetually falling? Backward, sideward, forward, in all directions? Is there any up or down left? Aren’t we straying as through an infinite nothing? Do we not feel the breath of empty space? Hasn’t it become colder? Isn’t more and more night coming on all the time? Must not lanterns be lit in the morning? Do we not hear anything yet of the noise of the gravediggers who are burying God? Do we not smell anything yet of God’s putrefaction? Gods, too, decompose. God is dead. God remains dead. And we have killed him. How shall we, the murderers of all murderers, comfort ourselves? That which was holiest and mightiest of all that the world has yet possessed has bled to death under our knives — who will wipe this blood off us? With what water could we purify ourselves? What festivals of atonement, what sacred games will we need to invent? Isn’t the greatness of this deed too great for us? Must we not ourselves become gods simply to seem worthy of it?”

We have yet to reorient ourselves and find a truer path to the grounding of Being. As Heidegger aptly described our desolate time:

The twilight of the gods is past, and in this dark midnight we search for the poem of Being. As for me? I’m chilling and laughing at the edge of the universe, where space and time escaped through the vanishing point; laughing and dancing with those crazy quarks and bosons. You never know what they’ll do next! And while you’re here, look over the edge! Don’t be afraid – I promise you’ll laugh too. There is no hell full of tortured souls down there after all. 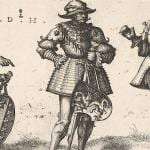 August 25, 2019 A Dialog with a Critic: When Athens Met Jerusalem
Browse Our Archives
Related posts from Eidos