Listening to the Story: Taking Time for The Bards, Becoming a Bard 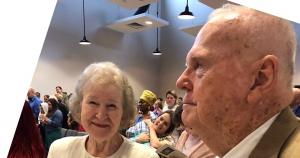 We asked Dad for a story often and he was ready. He rehearsed stories from his past, our grandparents’ past, the tales of West Virginia (many true!), and selections from history. Dad rooted us to those West Virginia hills even though we left them as small children, he gave us a sense of where we had been that helped us know where we might go, and he revealed his heart and mind to us, though we could not understand that at that time.

I still love hearing Dad tell a story. He says of his Dad that in old age he could tell his own father’s stories better than he could, that has not happened yet for us, so we must listen some more. An ancient human truth is people need stories, stories of their own people, to thrive. Man cannot live on Netflix series alone.

We need bards like my Dad. In Odyssey Homer, who knew something about being a bard, has a character say:

Bards are revered By all men upon earth, for the Muse Loves them well and has taught them the songways.”*

“Songways”  is a lovely translation.

The Muse teaches the bard not merely to sing, but to walk in the pathway of music. Homer asks the muse to speak at the start of Odyssey, because man is in dire trouble and not ready for music. This is odd since Odysseus lives in a Greek paradise: much food, drink, running hot and cold water, and a goddess who longs to make him immortal. The man is, however, not being a man. He is far from home. He needs cold words to cool desire.

We often have what many think we should want and discover that desire is a trap: isolating us on an island away from those who love us. Speaking can begin to bring us home: words are weighed, discussion starts, and arguments hone our ideas. Words are the raft that begins our voyage, but this is not enough. Our deepest dreams and our most painful experiences require words that become songs. Songs come when words are rehearsed so often that they develop a rhythm and all “extras” are cut. Eventually, if rehearsed enough through countless trouble, our words help us find the songways: ordered emotion or emotional order. That is music!

I think Homer’s Odysseus cannot get home until his war, the futile Trojan War, and his many sufferings become music. Homer’s hero finds the pathways of music, because he is asked to repeat his tale, or versions of his life, several times in the epic poem. He finds the songway.

[5] Nothing we do is sweeter than this—A cheerful gathering of all the people Sitting side by side throughout the halls, Feasting and listening to a singer of tales, The tables filled with food and drink, [10] The server drawing wine from the bowl And bringing it around to fill our cups. For me, this is the finest thing in the world.** 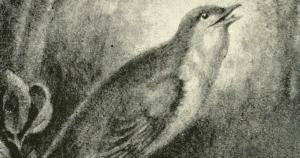 For Odysseus, the sweetness of listening is lost when he has tell his own story of sorrows, yet telling the tale is part of his healing. He gains distance with words. Eventually he, perhaps with help from bardic friends, will capture his many sorrows, the twists and turns of his life, and all will be epic. Until then, telling his heart, Odysseus would prefer to help others by listening, but the completeness of community will demand that eventually he speak: the man of constant sorrows.

I have heard old men tell stories and retell stories so often they gained a new meaning inside of the story teller’s life. The pain was (in part) captured in the story and depth, becoming a man, was possible when the story became his tale. The events did not merely happen to that man, he captured them and put them in service through the magic of words in a story.

This is possible for all of us, but only if we take the time to feast and listen to the singer of tales. We cannot be drowning out our own adventures with store bought stories all the time. We must tell our tale and listen as others do the same. This may not be “the finest thing in the world,” but story telling is very fine and is vanishing.

God help us find a way to a feast where listening and telling is possible: as Odysseus found such a feast in such a place is our way home: the place where all the good adventures end. My Dad knows how to sing a story, he has rehearsed just enough so that his songs are sermons: Godward music of home.

Tell us a story, Dad. 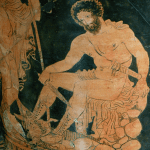 August 30, 2019 Don’t Be Elpenor: Some Ways of Failing the Hero with One Particularly Silly One
Browse Our Archives
get the latest updates from
Eidos
and the Patheos
Evangelical
Channel
POPULAR AT PATHEOS Evangelical
1

Challenge to Trump from the Right?
Cranach
Books by This Author John Mark Reynolds

Languages of Faith and Empire
I have been writing about how empires spread and shape religions. The...
view all Evangelical blogs
Copyright 2008-2021, Patheos. All rights reserved.