“Aunt Tilley is coming,” he said and laughed. “Time to roll out the Christian stuff to keep that bequest coming.”*

What did he mean?

He meant that there were some old folks, people who did not “get it,” and did not wish to let “Christian U” find the future. The administrators wanted Aunt Tilley’s money, but knew if Aunt Tilley (“bless her heart”) knew what they were doing, then . . . . No. They told Aunt Tilley what she wanted to hear and then did what they wanted to do.

I was a philosopher, and social media had not outed my views, so the assumption was, like everyone else in the conference room, that I too laughed at our avuncular Presidents, mocked our boards, and kept moving our schools away from the very ideas and values that brought us most of our students and nearly all our money. Since then, Aunt Tilley stood in for the tactic of recruiting to the right and teaching to the left.

The Aunt Tilley move combines cowardice and duplicity with bad ideas. This higher education lying is not limited to Christian colleges, but exists (or so I am told) at many places where the “pitch” is tailored to what the person wants to hear. Need money for the B-School? Convince Mr. Smith that “we love free markets,” talk some football, and then use Mr. Smith’s money to undermine everything Mr. Smith has ever believed.

I have heard people laugh at the Mr. Smiths.

Yet the Aunt Tilley is most irksome to me, because Christians are not being Christian when they Aunt Tilley. If the school, for example, has a chief academic officer who hates (say) the values of the Founders, then tell the truth and say so. Don’t gas light the alum.

There are numerous variations of the basic Aunt Tilley: the super-spiritual chapel on Parent Weekend,  a president who talks with pained expressions about how he is a conservative while the daily work is done by someone else who surely is not, the token Christian faculty member given a school media spot light, even if her traditional views are ignored in faculty meetings, or the pained look that comes when the President or (numerous) executives suggest that any critic is denying their very Christian faith to distract from the issue at hand.

My favorite Aunt Tilley move is to keep an odd rule (no card playing here!), some obscure doctrine, or some tiny traditional symbol or sign. More than a few schools will end up hosting a gay marriage, while holding the ground on dancing on campus.

If your sociology or psychology department wants to do this, if you wish to do this, then argue the merits and convince the folks. Maybe the old view is wrong, but don’t Aunt Tilley your way to the new view. If you need to change, then say so. Say what you are doing and why: no fakery. The good news is that Google has made the Aunt Tilley maneuver harder. Whenever you are bewildered by the direction of an institution, religious or otherwise, here are five fool proof (don’t be a fool!) ways to know:

The Aunt Tilley is so common, that a person might despair. Do not. Instead, do homework. Read. Think. Examine. Yesterday’s good school is the school that hates your values, but does so after you pay them thousands to educate your kids.

*This was not a Christian college where I have worked. To give but ONE example of a great and godly leader and a good place one can trust: John Jackson at William Jessup University.

December 10, 2019
How to Sell Bragdon Wood: Lessons in Leadership from “That Hideous Strength”
Next Post

December 12, 2019 What’s happening at Edgestow? (A Parody of a Bit of That Hideous Strength)
Browse Our Archives
Follow Us!

Christians, COVID-19, and the Dangerous Idol...
The Chorus In The Chaos
Books by This Author John Mark Reynolds 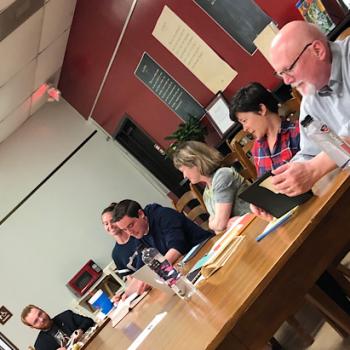 Evangelical
Making the Call to Go Online in a...
Eidos
TRENDING AT PATHEOS Evangelical

On Misreading Winning and the Mandate of Heaven...
Times look bad  and the temptation is to extrapolate from who is...
view all Evangelical blogs
Copyright 2008-2020, Patheos. All rights reserved.