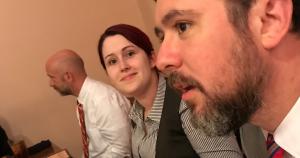 Who should be educated?

The liturgical life of the Church is an education of every aspect of a human person. The deep work of the Holy Spirit in the life of the believer is the subject of profound theological reflection available to all. Without attempting to describe this experience, the scope of the work of the church, available to whosoever will, suggests that classical, Christian education should also be universal.

Surely if all can be baptized, all should receive, as needed, the gifts of an education.

The church makes saints for paradise, but the commonwealth also has a role to play in this task. The community in a city, a village, or the countryside does not merely minister to the physical, but educates and trains the Christian in virtue. The faith works out salvation in the hospital, in the school, in the fields, especially in the family.

A caution is in order. In the United States, many great religious schools, colleges, and universities have been built only to lose their Christian nature. They cease to look for what is good, true, and beautiful in other traditions, but are overwhelmed and separate from Christian truth altogether. One seminal book on the topic describes this disengagement as the dying of the light.

That the Church does not control the school does not mean that theological truth can be ignored. John Henry Newman saw this process in the West:

It is the fashion just now, as you very well know, to erect so”called Universities, without making any provision in them at all for Theological chairs. Institutions of this kind exist both here and in England. Such a procedure, though defended by writers of the generation just passed with much plausible argument and not a little wit, seems to me an intellectual absurdity; and my reason for saying so runs, with whatever abruptness, into the form of a syllogism: A University, I should lay down, by its very name professes to teach universal knowledge: Theology is surely a branch of knowledge: how then is it possible for it to profess all branches of knowledge, and yet to exclude from the subjects of its teaching one which, to say the least, is as important and as large as any of them? I do not see that either premiss of this argument is open to exception.

This education that includes all truth must be part of the life of every person. The family is one of the first educators. The father and mother give the first lessons in virtue and truth. They should, as much as they can, choose education that begins in virtue.

As John Chrysostom says to fathers:

Hear what Paul saith, “Bring them up in the chastening and admonition of the Lord”; study not to make him an orator, but train him up to be a philosopher. In the want of the one there will be no harm whatever; in the absence of the other, all the rhetoric in the world will be of no advantage. Tempers are wanted, not talking; character, not cleverness; deeds, not words. These gain a man the kingdom. These confer what are benefits indeed. Whet not his tongue, but cleanse his soul. I do not say this to prevent your teaching him these things, but to prevent your attending to them exclusively.

Goodness and truth are the standards for what is included, not the source. Education cannot ignore truth just because it is “theological” and not “scientific,” or due to a “pagan” or “Christian” source!

The universal education found in the church and outside the church in the family makes Christianity a school building movement. In the Eastern Roman Empire, education was widespread for men with some access for women. Elementary education was as universal as possible with a focus on writing and reading. Secondary education was available in the classical languages and literature. In Constantinople, there were advanced “universities” that focused on philosophy and law. Trades such as medicine were learned through apprenticeships.

One historic problem was the inconsistency of opportunity in education. The Liturgical Feast is available to all: the Emperor eats the same bread and drinks the same cup as the simplest subject. Too often education outside the Church has not been as universally available. Irrelevant barriers to education, such as poverty, should have been overcome more often than they were. While we do not yet live in paradise, we can strive to give everyone the education that best fits the individual.

The school can and should teach, without compromising any truth, all God’s children. In this manner, the classical, Christian school can compliment the educational mission of the Church by educating those who might not wish or be able yet to enter the Church. Those who are not Christians, to cite one example, have been welcome as professors and students at the Balamand University. Just as the Christian hospital is open to all the suffering, so the school is open to all those who would find wisdom.

The True Light appears to all who would see. The Christian educator leaves the liturgy showing as much of that Light as  our imperfect vessels can convey.

February 18, 2020 The Ark of Education
Browse Our Archives
Follow Us!

Get Ready for a "Hell of...
Cranach
Books by This Author John Mark Reynolds