At the Center of the Labyrinth . . . (On Pandemics, Dying, and Phaedrus) 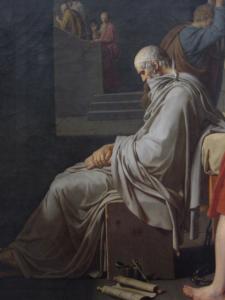 Athens has decided that he is a trouble maker, asking impertinent questions, arguing for the Good over against the gods of the Homer, refusing the exploitative educational practices of the day. Such men are often crucified by power, because they side with the poor and not the mob, the truth and not the credentialed, the good and not the priests. They are crazy with the inspiration of the good God.

Socrates had to die.

The rule-makers, the sophists, and the pharisees needed him dead. Socrates was dangerous, because Socrates would not accept genteel atheism or the civil religion created to placate the masses. Instead, he loved goodness so much that he kept pushing toward the Good: an end to atheism and polytheism. Socrates was condemned to die, but the rituals of the hypocrites delayed the date. The City sent a ship, a ritual sacrifice, to Delos recollecting the deliverance of Athens from the monstrous Minotaur. This monster had the head of bull and the body of man, the worst features of both creatures! Theseus killed this monstrous beast and the isle of Delos, dedicated to purity, commemorated this heroism yearly.

Rather than pollute their ceremony, Athens held off on killing their greatest citizen.

Yet Socrates is not afraid, he loves wisdom too much. Nothing can stop his questioning, his questing for the Good, the Truth, Beauty. Socrates is perfectly in love and knows no fear.

On Delos, shrines to Asclepius are dedicated to physical healing and this is a very good thing, but Socrates has lived a long, good life. He knows there is worse than death, dishonor. He will not escape. He will force Athens to kill him, force the populace to see what the puppet masters have done to them. Theseus saved Athens from a youth with the brains of a bull. Socrates will do better.

Facing death, pandemic terror, we must be reasonable, righteous, and regulate our passions. The worst that the establishment and the mixed up world can do is send us to eternity. There justice rules and all will be made right. Nothing will be forgotten that should be recollected.

The monster, the Minotaur, was at the center of the labyrinth. What if we question and search and we get to the center of the mystery and find nothing but a monster? Ancient Athens feared this was true. Scratch too hard on the assumptions of the city and the leadership and nothing good will come. Socrates had another idea. He saw, dimly as if in a mirror, something that provoked love. Socrates thought that if he kept wondering that all would be wonderful. His love was of something and that something would be as beautiful as the love provoked.

In prison, near death, Socrates is unafraid, uninhibited, he will talk, of poetry, of beauty, of death and what is on the other side. Delos, the place of official purity, is dedicated to Apollo, the god of sun, poetry. . .and at the start of Iliad plague. Socrates knows that the light that Athens worships at Delos is only a reflection of the True Light. Poetry can be bent to bad purposes, but the right harmony, the truest poetry, liberates. Socrates dies poetically, his every act a symbol, because he knows that every action of a just man in the face of injustice is a harmony that exposes the disharmony of the sophists, the fakers, the false elite.

Just as in Pericles’ time, there is a plague in the City that kills men. They do not die as Socrates will die. These moral cowards do not embrace justice and look to the afterlife with confidence. Instead, they quiver and seek to prolong petty tyrannies in this life. Why? They know in the life to come all fakery, all falsehoods, all real impurity will be purged.

The Socratic hero will slay the bull-headed monster.

Is there any question why Christians heard this story and felt a fundamental resonance? We will be reasonable, unafraid, rational, and seek justice in all we do.

Be calm. Carry on.

May 18, 2020
The Necessity of Poetry to the Analytic Mind
Next Post

Why Lying Has Become Normal and...
Roger E. Olson
Books by This Author John Mark Reynolds

Evangelical
The Venerable Damiane: the Prayers and Music Endure
Eidos 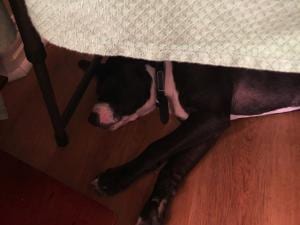 Evangelical
Poops and Joy in the Morning (Joy in...
Eidos 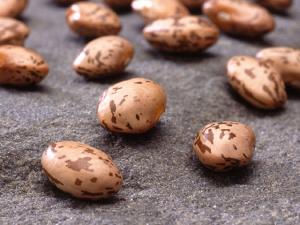 The Disruptive Gift of Silence: a Lesson from...
At the time, March 12 felt like any other Thursday. I went...
view all Evangelical blogs
Copyright 2008-2020, Patheos. All rights reserved.