Keeping our Brothers and Sisters 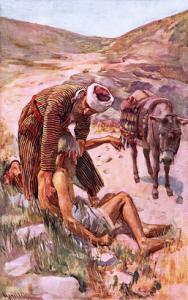 Moral men have a duty to help their neighbors, but nobody has an obligation to force other people to help.

Jesus told a story of a Good Samaritan who crossed difficult social and cultural barriers to provide relief to an injured man. This is a good model for our own behavior. We should help the hurting neighbor even if he is a pariah in our community. The mortgage broker who has lost his job is also my neighbor and when he is hurting and repentant should receive pity, charity, and care and not just sermons about his errors.

Moral behavior is most valuable to our growth when it is not easy to do. There is a constant temptation to avoid doing our moral duty by ignoring it or passing off the dirty work of duty to somebody else.

The Scroogish Samaritan ignores his moral duty to help his neighbor. He assumes everybody should care only for self and destroys common culture by his selfishness. The Statist Samaritan forces everybody else to help the injured man and so gains a cheap feeling of virtue, but undermines any real virtue.

The Scrooge believes that it is enough for “a man to mind his own business” and forgets that he is tied to the fate of everyone else in his common culture. History shows prosperity cannot last when it is dependent on the hopeless poverty of others.

It is immoral to allow such an unjust system to survive. Even in a perfectly just society, it would be useless to lecture the hurting about their mistakes before dealing with their pain. Telling a hungry mother with starving children about the virtues of liberty without first feeding her is cruel and breeds revolutions. The moral man must deal with blinding pain in the hurting before he tries to show the victim a way to avoid future hurts.

It is true that you should teach a man to fish and not just give him a fish, but before teaching him to fish, he has to be fit to learn. You cannot teach a starving man to fish. First, give him a fish. Second, teach him the skills that will give him the ability to become a giver of charity and not just a receiver. The goal of any charity is to allow the man who receives it to also be able to gain the astounding blessings of being a giver.

Sadly, it is so much more blessed to give than to receive that the Statist Samaritan tries to give all the blessings to the state. He loves the state and so wishes to turn everyone’s appreciation for charity to it.

Not surprisingly, charity that is coerced does harm to everyone. The injured party may be helped at first, but only at the cost of doing injustice to others. Taxing Peter forces Peter to help Paul which often does little for Paul, but almost certainly will make Peter resent Paul. Peter should help Paul, but making him do it will teach both men bad lessons. The taxed feels resentment as the object of his charity lacks a human face. He gives his coerced taxes to faceless bureaucracy, and the recipient becomes the ward of government.

When we pass our moral duties over to the state, we lose the power to do charity ourselves. We turn an act of charity into coercion, and give the state too much power. People are habituated to look to the state to meet their needs and not their communities, churches, and family. This weakens every non-state institution and risks tyranny.

Forced charity is inefficient because it rarely distinguishes between worthy and unworthy attempts at charity. By cutting everyone a check or putting everyone in “one size fits all” programs, it is radically inefficient and often harms the giver and the recipient. The government takes a slice of the money in order to maintain the program. Often the program itself will outlive its usefulness, but keeps using tax money. The closest thing to immortality ever created by humankind is a government program.

Of course, in some extraordinary circumstances the community itself has been devastated or is so dysfunctional that the state must act. A horrific natural disaster can leave too few neighbors left to help. A deeply embedded racist culture can use local state power and cultural institutions to practice injustice. In such horrific cases, federal power may be necessary to solve gross problems.

Christian teaching and natural law teaches that good men and women should help each other. This charity is best when it is private and not coerced. American popular culture would be wise to celebrate the Samaritan and stop holding up as heroic conspicuous consumers, Scrooges, or statists.

July 12, 2020 O Holy Wisdom
Browse Our Archives
get the latest from
Eidos
Sign up for our newsletter
POPULAR AT PATHEOS Evangelical
1

Evangelical
Whit Had Great Value to God (Thoughts from...
Eidos

Evangelical
We can do better.
Eidos
TRENDING AT PATHEOS Evangelical