The Hopeful Theodicy: God takes on all our pain. . .

When the God-man wept before the tomb of Lazarus, He gave us hope.

The God-man does not just know our pain, but heals our pain. The raising of Lazarus is temporary, of course. Lazarus will die again, but it is a down payment (an image) of the resurrection that will never be reversed.

The God-man waits and God gets glory, but healing also comes to many, including Martha and Mary. Martha is allowed to make a confession of Jesus’ divinity as powerful, and more complete, than that of Peter. This time her active spirit drives her out to Jesus, so she sees Him first and dialogs with Him. Mary is slower to come, but eventually follows Martha.

In the text, we see that the waiting has produced growth in at least Martha: she has passed the test in the school of souls. Her growing pains are not allowed to last a moment longer than necessary as she receives more than her reason can demand. She wanted Lazarus healed of disease, but the Lord Jesus delivered her brother from death.

Why is this greater if Lazarus must die again? It is greater because we see healings all the time: Divine healing is simply a speeding up of the process that often occurs in a man. We do not see resurrection, because our life is too short. As Plato argues in Phaedo, life gives way to death, but death gives way to life. Most of us will not live long enough to see the general resurrection of the dead, so we have our doubts. Lazarus destroyed those doubts once and for all.

Death is no more unconquerable than illness.

If death is not final and there is eternal life after death, then no temporal suffering can be too great for eternity. However bad a day, a year, or a lifetime, there are more days, years, lifetimes in eternity to resolve our pain if we will allow God to do so.

Christ is victor: pain conquered in pain, death by death.

By raising Lazarus from the dead before Thy passion, Thou didst confirm the universal resurrection, O Christ God! Like the children with the branches of victory, we cry out to Thee, O Vanquisher of Death: Hosanna in the highest! Blessed is he that comes in the name of the Lord! (Troparion).

The Passion of the Savior might overwhelm the reader of the Gospel, if he did not first read the story of Lazarus. The raising of the dead man, a stinking corpse, to full life is a promise that the story need not end on the Holy Cross. The rules of story telling have changed: death need not be final.

What will happen when you kill the God-man? He will go where dead men go, but He will bring with Him the Divine Nature. Modern skeptics often say of the resurrection of Jesus: extraordinary claims require extraordinary evidence.

How extraordinary was the resurrection of Jesus? Given what the Lord Jesus did in His lifetime, not so extraordinary at all. He was singular, so the rules changed. He could heal sick people, cast out devils, and raise the dead. Why would we be shocked that Jesus did not stay dead?

We have good evidence that Jesus was raised from the dead as many philosophers have formally argued. His disciples did not need extraordinary evidence, because they knew His nature and His life. If we accept the description of His life in the Gospels, then His trampling down death with death is natural.

The Kingdom was, is, and is to come.

Christ —the Joy, the Truth and the Light of All, the Life of the world and its Resurrection—has appeared in his goodness to those on earth. He has become the Image of our Resurrection, granting divine forgiveness to all (Kontakion).

The liturgy of Lazarus Saturday makes plain: I can experience the truth of John 11 today. Like Pentecost, this is a great day for baptism in the Church and this outer sign of an inner work is another key to understanding the Lazarus story. When I was dunked under the waters of the Little Sandy River in West Virginia, I died to the old life, was buried, and raised to new life. This implies that I can experience the entire Gospel today.

The positioning of Lazarus Saturday at the end of Lent reminds me of my humanity, but also of the Divine Life that not only is coming, but also is present in the world now. I will be raised with Christ, but I am now raised with Him mystically to Heavenly places.

I am as Lazarus was. I too will die (again!), but having died once, death has no more power over me. I have been called forth from the grave of the waters of baptism and so live now. Just as Lazarus was dead, resurrected, died again, and will live again, so it is for me. The message of John 11 is that victory has been won, is being won, and will be won. The faithful experience all of these conditions now: an eternal now. 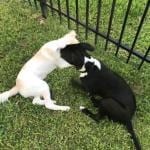