Morality uses medicine, but so does immorality.

When I was a little boy, I knew a man who had been given “medical treatment” by the State of New York in the name of science. The brain surgery he received had more to do with his race and secular attitudes toward humanity at the time than any illness. It left him permanently unable to live in society. At the same time, I know medical doctors and nurses who take their time to sacrificially travel to nations like Rwanda to give medical care.

Science may say that a certain treatment will “cure” a particular disease, but humanity must decide what should be done. Doctors are powerful and have a great deal of knowledge, but even if they knew everything about the human body, it would tell them nothing about what humanity should want for itself.

Catholic hospitals do not base their moral attitudes on magical moral thinking. They do not pretend that medicine miraculously can pull “ought” from  “is.” Catholic scholars know that what we should do is not the same as what we can do.

I am not a Roman Catholic and do not agree with all the conclusions that Church has reached in morality. However, I do not pretend that my disagreement with the Church is over medicine, but over morality. When the state decides to impose its moral vision on a charitable group that heals millions around the world, free men and women must oppose it.

If science cannot be the basis of morality, then what will be?

Majority rule is a bad basis for moral decisions. The majority of our ruling class agrees as is evidenced by their refusal to accept voters opinions on issues they think matters of conscience. The tyranny of an immoral mob can be as bad as a solitary tyrant and do more cultural damage.

Education is helpful, but educational institutions can produce group think just as much as any other group of humans. Most educational institutions in the United States are dominated by one philosophical point of view: secularism. Catholic and other Christian schools represent another perspective from thoughtful and well educated people. Teaching hospitals in those schools give an alternative moral perspective to the medical community. Forcing them to conform, based on political power, is dangerous to liberty.

One reason many Christian conservatives oppose state control of medicine or the growing state subsidy of medicine is this very fear: politicians will be making deeply personal moral decisions. Christians prefer to leave most of those decisions to individual institutions.

With the Founders of America, we think small government safeguards our moral options. We do draw the line when it comes to “life, liberty, and the pursuit of happiness.”

With the Founders, small government Christians understand human happiness as the liberty to do good and to flourish as a human being physically, intellectually, and spiritually.

George Washington was right when he wrote about morality in his Farewell Address to our nation, words read in our Senate every year since the Civil War:

“Of all the dispositions and habits which lead to political prosperity, religion and morality are indispensable supports. In vain would that man claim the tribute of patriotism, who should labor to subvert these great pillars of human happiness, these firmest props of the duties of men and citizens. The mere politician, equally with the pious man, ought to respect and to cherish them. A volume could not trace all their connections with private and public felicity. Let it simply be asked: Where is the security for property, for reputation, for life, if the sense of religious obligation desert the oaths which are the instruments of investigation in courts of justice ? And let us with caution indulge the supposition that morality can be maintained without religion. Whatever may be conceded to the influence of refined education on minds of peculiar structure, reason and experience both forbid us to expect that national morality can prevail in exclusion of religious principle.

It is substantially true that virtue or morality is a necessary spring of popular government. The rule, indeed, extends with more or less force to every species of free government. Who that is a sincere friend to it can look with indifference upon attempts to shake the foundation of the fabric?”

If Mitt Romney or Joe Biden said this, certain members of our ruling class would call him a “dominionist” and worry about a coming theocracy!

Instead, from the founding of our nation, Americans chose to assume a broad Judeo-Christian morality with as much liberty under that system for others such as skeptics to live as they pleased. Of course, there were inconsistencies in the application of this standard from the start. Slavery was the original sin of the Republic that broke the basic rights to life and liberty and removing it cost the nation dearly.

Yet remove slavery the Republic did with overt appeals by political leaders such as Lincoln to the American religious consensus. On most issues, Lincoln and his party were willing to allow humans liberty and choice, but not on this issue.

His successors kept that bargain. Utah could not become a state until it met the moral norms of the rest of the nation. Franklin Roosevelt had no hesitation in appealing to religiously based morals in the Second World War. Prohibition was a jarring modern inconsistency when the religious majority, with strong support from progressives, went too far and imposed its morality on minority groups such as Roman Catholics.

Medical facts were used to support that imposition on liberty, that alcohol consumption is a health risk is a medical fact, but that such risks should be illegal is a moral and not a medical choice.
As Prohibition demonstrated, as long as government remains small, compromise is possible, but the swollen progressive state threatens all moral minorities. Progressive secularists are playing with fire now by threatening Catholic hospitals. An unwise and ungenerous coalition of religious groups might be tempted to use the same punitive tools if they come to power.

Practicing Catholics are a moral minority in the United States, but most other religious groups, including smaller groups like the Amish, the United States under Washington’s vision always found a way to come to terms with them. Now an odd notion that morality can easily be divorced from religion has become trendy and threatens this happy and peaceful accommodation.

The story of the United States has been making Washington’s vision more consistent and real for more people. Imposing an alien morality on Catholic hospitals, truer to the Founders than the innovators, risks our heritage for no real gain. True sons and daughters of liberty stand in solidarity with their Catholic brothers and sisters on this issue. 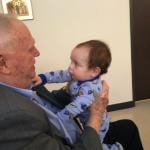 August 2, 2020 Question Everything
Browse Our Archives
get the latest from
Eidos
Sign up for our newsletter
POPULAR AT PATHEOS Evangelical
1 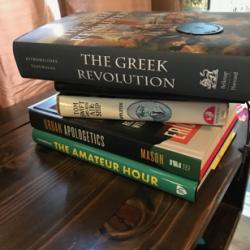 Evangelical
Real Armor: a Problem with too much Virtual...
Eidos
TRENDING AT PATHEOS Evangelical

You Are Not Alone
“The desperate need today is not for a great number of intelligent...
view all Evangelical blogs
Copyright 2008-2021, Patheos. All rights reserved.
error: Content is protected !!